ORD Home » Currents  » Research yields insight on sexual misconduct in the military going back to ... 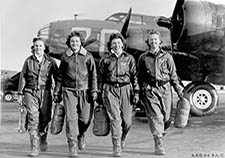 Members of the Women Airforce Service Pilots (WASPs) return from a B-17 flight at Lockbourne Air Force Base in Ohio in 1944. Though WASPs served under military command, they were actually civilians. They flew military planes in the U.S. to free up male combat pilots for duty abroad. (Photo: USAF, via Wikimedia Commons)

Members of the Women Airforce Service Pilots (WASPs) return from a B-17 flight at Lockbourne Air Force Base in Ohio in 1944. Though WASPs served under military command, they were actually civilians. They flew military planes in the U.S. to free up male combat pilots for duty abroad. (Photo: USAF, via Wikimedia Commons)


The focus on sexual misconduct in the military has expanded dramatically in recent years, with most of the research targeted toward military members and Veterans serving in the post 9-11 period.

Now, a recently published VA study offers a snapshot into the existence of sexual improprieties toward women in the military going back decades. Based on the accounts of a select number of women, the study adds important insight into the scope and persistent nature of the problem.

The study, appearing in the August 2016 issue of Military Medicine, highlights a pattern of sexual misconduct that spans the enrollment of women in the military from World War II through the conflicts in Iraq and Afghanistan. The research finds that 90 percent of women experienced some form of military sexual trauma (MST) while serving in the U.S. military.

The women described cases of military sexual trauma, a term used by DoD to refer to instances of sexual harassment, sexual coercion, sexual assault or attempted sexual assault that a Veteran experienced during his or her military service. They also detailed barriers to reporting incidents of sexual misconduct and sexual assault, and the challenges they faced when seeking health care. Participants completed a questionnaire or agreed to a one-one-one interview and were allowed to remain anonymous.

"The most frustrating and disappointing finding is how little has changed over time..."

"This article expands our body of knowledge around MST and shows the tremendous barriers women have faced and continue to face while serving in the military, particularly regarding experiencing and healing from MST," Wolff says. "Only time will tell what that impact is."

"The most frustrating and disappointing finding is how little has changed over time both in terms of cultural shifts and what survivors of MST have experienced and continue to experience with people they need to be able to trust and rely on," she adds. 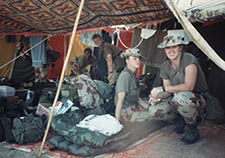 Women soldiers are seen in their quarters in Guardian City, Saudi Arabia, in 1990 during the Persian Gulf War. (Photo: Library of Congress)

Women soldiers are seen in their quarters in Guardian City, Saudi Arabia, in 1990 during the Persian Gulf War. (Photo: Library of Congress)


The study began as an examination of Veterans' experiences in the military, with part of it comparing men's and women's stories. The researchers anticipated that information on MST would emerge but did not expect to have so much "rich data," says Wolff, a medical sociologist at Dartmouth College and Colby-Sawyer College in New Hampshire.

Most of the participants served prior to 2001, but a few were Veterans of the fighting in Iraq and Afghanistan. As part of a larger study, 52 women Veterans completed surveys and 47 (90 percent) described being victims of at least one form of MST during their time in the military. None of the women, according to Wolff, sought to be part of the project specifically because of their MST experiences, suggesting that the sample was representative of women Veterans on the whole and was not skewed toward those who had in fact experienced MST.

Wolff and Mills evaluated women who joined the military during four different periods:

MST highest during period of integration

Women who joined the military during integration reported the highest percentage of MST. Each person in that group experienced at least one form of military sexual trauma. Those who joined after 1992 documented the lowest percentage (60 percent). Sexual harassment was the most common reported form of misconduct, with 60 percent in the post-1992 group experiencing it and more than 90 percent in the other three.

Many of the Veterans described unsettling experiences, including one (pre-1973) who said she was gang-raped. "Guys would offer me a Coke and drop a drug in it," she recalled. "When I passed out they'd rape me." Another Veteran (1973-78) recalled being "harassed virtually every day with cat calls and men propositioning me." Another (1979-92) indicated that "some of the men believed I was there for them to have sex with." One other participant (post-1992) noted that her supervisor continually pressured her "with sexual comments and invitations."

The study notes that data could be biased due to "selective memory, confusing particulars of events or the complexities of living with trauma, including pain associated with retelling of events."

"Most of the Veterans described living and working in an atmosphere of uncertainty and questionable personable safety due to the combination of sexual misconduct and a perceived absence of accountability for perpetrators," the study authors wrote. "This was intensified if she was one of a few women or the only woman in her unit."

Misconduct such as sexual harassment often took place in public settings, according to the research.

"Actions such as inappropriate comments, jokes and disparaging sexual images were common in group settings, creating a culture that was deprecating to women," the study notes.

Of the 52 respondents, only eight (15 percent) tried to report the incidents. Most of them remained silent due to a lack of options to report, the fear of retaliation and the authority of the alleged assailants. More than half of the alleged aggressors were ranked higher than the victims. Some 30 percent of the victims were officers. 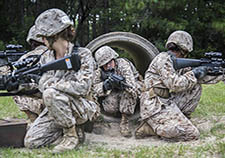 The study notes that reporting of MST has improved with the creation in 2004 of DoD's Sexual Assault Prevention and Response Office (SAPRO), which works with the U.S. military and civilian community and provides a helpline for men and women to report cases of sexual assault.

The year 2013 saw about a 50 percent increase in the number of reports, compared with an average yearly increase of 5 percent. There was an 8 percent increase in 2014. Pentagon officials say the increased reports, coupled with a 2014 DoD/Rand Corporation survey that said the estimated number of sexual assaults in the U.S. military dropped that year, show progress is being made to counter the problem of sexual assault.

Wolff says questions remain, though, about the Pentagon's assessment showing a decline in sexual assaults.

"There has not been consistent enough reporting to really understand prevalence well enough to know if assaults are increasing, decreasing or staying the same," she says. "It is important also to remember that assaults are a small percentage of all types of MST combined, and while reporting mechanisms have improved on some level, multiple barriers and disincentives to report remain."