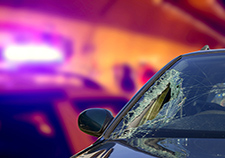 A VA study found that Iraq and Afghanistan Veterans with traumatic brain injuries have a fourfold risk of being hospitalized from a motor vehicle crash, compared with peers without TBI. (Photo: ©iStock/Martin Lisner) >

A VA study found that Iraq and Afghanistan Veterans with traumatic brain injuries have a fourfold risk of being hospitalized from a motor vehicle crash, compared with peers without TBI. (Photo: ©iStock/Martin Lisner)


It's well-documented that suicide rates among Veterans are at alarming levels. VA's Suicide Prevention Program found that an average of 20 Vets took their own lives each day in 2014.

A lesser-known but equally disconcerting trend has been the volume of tragic motor vehicle accidents involving Veterans, particularly young male drivers who fought in Iraq or Afghanistan.

A recently published VA study sheds light on the problem, finding that Vets from those conflicts who were diagnosed with traumatic brain injuries (TBI) were four times more likely to be hospitalized from motor vehicle crashes (MVCs) than those without TBI. To date, the growing numbers of Veterans with TBI who are at increased risk of car accidents in post-deployment has generated limited research.

"What we found is people with a traumatic brain injury of any severity are at increased risk [of] difficulties with driving, everything from just not doing well on driver simulators to having a higher incidence of motor vehicle collisions."

Traumatic brain injuries are often brought on by a jolt to the head, such as from an explosion. Most of the TBI cases in the study were likely mild in severity. These mild TBIs, also known as concussions, can often result in driving impairments, including a loss of concentration and focus. Moderate to severe TBI can cause slower reaction times and sensory dysfunction, wherein the brain has trouble processing information.

Hazards of driving with TBI

"What we found is people with a traumatic brain injury of any severity are at increased risk to have difficulties with driving, everything from just not doing well on driver simulators to having a higher incidence of motor vehicle collisions," says Dr. David Cifu, a co-author of the study and a senior TBI specialist with the Hunter Holmes McGuire VA Medical Center in Richmond, Virginia.

"We also found that most of the people that had more mild injuries had never been assessed or re-assessed for their driving skills because they had done well enough in other aspects of their lives and in rehab," he adds. "But this study suggests that there may be some higher-risk individuals who should be re-evaluated."

Nicholas Bartolomeo, who served three tours with the Marines in Iraq and now works at VA's Center of Innovation on Disability and Rehabilitation Research in Gainesville, Florida, demonstrates a driving simulator used in research at the center. (Photo by Greg Westlye)

Nicholas Bartolomeo, who served three tours with the Marines in Iraq and now works at VA's Center of Innovation on Disability and Rehabilitation Research in Gainesville, Florida, demonstrates a driving simulator used in research at the center. (Photo by Greg Westlye)


Cifu is also with the Center for Rehabilitation Sciences and Engineering at Virginia Commonwealth University in Richmond. The study's authors were also based at VA and university sites in Portland, Oregon; Albany, New York; and Minneapolis.

Out of a pool of nearly 280,000 Iraq and Afghanistan Veterans who regularly used VA health care for at least the first of their five-year post-deployment period, the researchers selected 422 who were hospitalized at VA facilities for injuries related to car accidents within five years of deployment. Of those, 130 were diagnosed with TBI before their MVC hospitalization.

Those who suffered TBI in combat may have also had additional brain injuries before and after their deployment tours, but there was no way to track that definitively, according to Cifu and Dr. Kathleen Carlson, the study's lead author and a health services researcher at the VA Portland Health Care System.

The research finds that most Veterans hospitalized for motor vehicle crashes were male (87 percent) and tended to be in the 18 to 24 age group (33 percent), a period that generally, for men, is associated with reckless driving.

In addition, the driving techniques that Vets once employed to dodge attacks in Iraq and Afghanistan could further explain some of the recklessness. However, the Veterans in the study were back in the United States at least three months, so the researchers anticipated any war-zone driving styles "would have been out of their system," Cifu says. Plus, the study controlled for age and gender, along with a host of other factors associated with MVC risk, meaning those factors alone were not driving the four-fold increased risk among Veterans diagnosed with TBI.

Regardless of whether Veterans' driving techniques were a factor in the TBI accident trend, Marlowe Eash, a certified drivers rehab specialist at the Washington DC VA Medical Center, acknowledges that the way troops are taught to drive in danger zones does impact their driving habits back home.

"They do have a harder time re-maneuvering back to the standard rules of driving because they're still on alert for IEDs [roadside bombs], even though they know they're back stateside," Eash says.

Eash works with patients who have suffered TBI in car accidents after returning from combat zones. She says posttraumatic stress disorder (PTSD) can compound the problems of a Veteran with TBI, noting that some of her patients with PTSD have become over-anxious on the road, with a distorted picture of their surroundings. The VA study also controlled for PTSD diagnosis, in theory eliminating any effects that it may have on the four-fold increased risk.

The authors of the VA study highlight the need for more research on driver safety education, stressing that Vets may benefit from such guidance to reduce risk. But getting everyone in the classroom is a challenge. VA has a program that screens those returning from war for brain injuries and offers them a special evaluation if found positive. But only about 75 percent of Veterans found positive show up for their evaluations, according to Cifu.

Many state motor vehicle agencies, Eash says, have policies in which they recommend or mandate that physicians inform them when a civilian or Veteran has a condition such as TBI that could negatively impact his or her ability to drive. In such cases, that person is encouraged to enroll in a driver's rehab program, she notes.

Ronald Medford, a former deputy administrator of the National Highway Traffic Safety Administration, voiced concern about the problem of Veterans getting into car accidents in a speech a few years ago:

"It troubles me to tell you that once you get them home safely, they are coming home to [the] risk of death and injury on our roadways."