ORD Home » Currents  » Closing in on biomarkers for suicidal behavior

Closing in on biomarkers for suicidal behavior

Enzyme involved in brain inflammation appears to be key 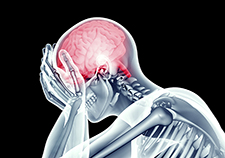 An international team including a VA researcher has identified a chemical pathway related to brain inflammation that may help predict suicide risk and possibly be a target for new drugs. (Photo: ©iStock/the-lightwriter)

An international team including a VA researcher has identified a chemical pathway related to brain inflammation that may help predict suicide risk and possibly be a target for new drugs. (Photo: ©iStock/the-lightwriter)


An enzyme called ACMSD—part of a chain of biochemical reactions called the kynurenine pathway, activated by inflammation—could become an important target for new drugs aimed at preventing suicide.

The enzyme shows reduced activity in people who have tried to kill themselves, according to a study published online Aug. 2, 2016, in Translational Psychiatry. And downstream effects of the sluggish enzyme—namely, abnormal levels of two acids in the body—could potentially be measured in blood tests to help identify patients at high risk, say the researchers.

The study was conducted with Swedish patients but involved collaborators in three other countries, including in the U.S. at VA's Rocky Mountain Mental Illness Research, Education, and Clinical Center (MIRECC) for Suicide Prevention in Denver, and at the Van Andel Research Institute in Michigan.

"We now want to find out if these changes are only seen in individuals with suicidal thoughts or if patients with severe depression also exhibit this. We also want to develop drugs that might activate the enzyme ACMSD and thus restore balance between quinolinic and picolinic acid," said Dr. Sophie Erhardt of the Karolinska Institutet in Stockholm, one of the leaders of the study.

Exploring other angles in suicide prevention

Senior author on the study was Dr. Lena Brundin at Van Andel. Representing VA was Dr. Teodor Postolache, a clinical and research psychiatrist with VA's Rocky Mountain MIRECC for Suicide Prevention. Postolache is also an investigator with VA's MIRECC in Baltimore, and a professor at the University of Maryland School of Medicine.

The immune system and mental health

An increasing body of evidence in recent years has implicated the immune system—particularly inflammation—as a possible contributing factor in both depression and suicidal behavior. Inflammation is one way the body responds to stress. But the link is complex, and researchers are still far from grasping exactly how the pieces fit together, and whether the findings can be used clinically to advance suicide prevention.

"We also want to develop drugs that might activate the enzyme ACMSD and thus restore balance between quinolinic and picolinic acid."

The new study, conducted in several phases, involved more than 300 Swedish patients and other volunteers. The researchers took samples of blood and cerebrospinal fluid from those who had attempted suicide, immediately after the suicidal episode and at intervals thereafter, and compared them with samples from healthy controls.

The changes were most pronounced in the cerebrospinal fluid, the clear liquid that cushions the brain and spinal cord. The abnormal levels persisted at least two years in repeated tests of the fluid. The changes also showed up in blood tests, albeit less markedly. But blood tests are much easier to perform than spinal taps, so they could represent a more practical clinical option.

The researchers knew from past studies that ACSMD modulates the levels of the two acids. They confirmed the link in the current study though a genetic analysis. They found that a particular variant of the ACSMD gene was more prevalent in suicide attempters, and was associated with increased quinolinic acid.

Targeting ACSMD with a drug to boost its activity could, in theory, normalize the ratio between the two acids it affects, say the researchers.

But the study wasn't designed to show a direct causal relationship between ACSMD activity and suicide risk. So it's not clear that raising ACSMD activity and restoring the picolinic-quinolinic ratio would actually curb suicidal behavior.

The next step in exploring that, say the researchers, would be lab tests with an animal model of depression. Lab animals that exhibit traits typical of depression, such as lack of interest in normal activities, as well as traits such as impulsivity, are commonly studied by scientists looking at suicidal behavior.

Combating inflammation over long term may be best

Further research may also shed light on issues of timing. To the extent that inflammation does drive suicidal behavior, it could be a problem that is years in the making, and that demands long-range strategies.

Dr. John Krystal, a psychiatry researcher with VA and Yale School of Medicine, is the editor of the journal Biological Psychiatry. He was quoted in response to a study in the journal last year that showed increased levels of inflammation-causing immune chemicals called cytokines in suicidal patients:

"Inflammation affects every organ in the body," noted Krystal. "It is increasingly evident that we need to take a long-term perspective on the effects of inflammation on the brain. The path to preventing suicide may be to intervene early in long-term processes that increase the risk for suicide, rather than to focus solely on the elusive short-term predictors of suicide."

Exploring other angles in suicide prevention 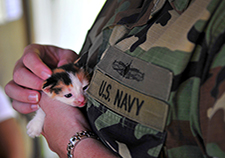 Researchers are exploring whether exposure to the pathogen Toxoplasma gondii—often spread through contact with cat feces—may be a factor in suicide risk among U.S. troops. (DoD photo)

Researchers are exploring whether exposure to the pathogen Toxoplasma gondii—often spread through contact with cat feces—may be a factor in suicide risk among U.S. troops. (DoD photo)


In related work, Postolache is now funded by VA to study the links between the brain-infecting pathogen Toxoplasma gondii and suicidal behavior. Past research has implicated the pathogen in this and other serious behavioral problems. Veterans may be at particularly high risk for T. gondii infection because it is common in some areas of the world where U.S. troops have been deployed, including the Middle East.

The study will recruit 600 Veterans in mental health care at the Denver, Baltimore, and Atlanta VA medical centers—half with a history of at least one suicide attempt, and half without. They will undergo extensive evaluations, including a blood test to determine whether they have been infected with T. gondii.

Postolache's team will probe the interaction among the T. gondii, inflammation, and the kynurenine pathway. They will pay special attention to how the traits of impulsivity and aggression—strongly associated with suicide—are affected.

"One working hypothesis is that a high picolinic-quinolinic acid ratio will result in a reduced vulnerability to infection with T. gondii and to inflammation," explains Postolache.

Dr. Lena Brundin of the Van Andel Research Institute will collaborate with the VA group to help measure several molecules of interest, including picolinic and quinolinic acid.

In other work, Postolache is co-investigator with Brundin, the principal investigator, on a National Institute of Mental Health grant focused on the potential role of ACMSD in depression and suicide attempts in mothers after delivery.

All in all, Postolache says a good deal of research is still needed to firm up the understanding of ACMSD in suicide, and to explore potential clinical applications.

"We are far from affirming a causal relationship," he says. "We need interventional and longitudinal studies to advance our understanding of this potentially key molecular relay, and to determine if [the associated] inflammation or infection is resulting in impairment of brain function."

Assuming the ACMSD-suicide theory continues to hold up in further research, Postolache says it will likely be another 5 to 10 years at least, given current funding levels, before it can find clinical application.