John Westerfield is the owner-manager of Yeager's Sporting Goods in Bellingham, Washington. The store carries a full line of firearm safety products and promotes firearm safety in various ways—for example, making sure that every gun that is sold is accompanied by a gun lock. Learn more at www.projectchildsafe.org/blog. (Photo courtesy of Project ChildSafe) 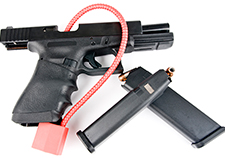 The findings appeared in August 2017 in Injury Prevention.

More than 200 people took part in the study. Nearly 90 percent chose a lock box instead of a trigger lock for a safety device. The study team then assessed changes in three safe firearm storage practices: whether all household firearms were stored and locked, whether all of them were unloaded, and whether all ammunition was locked. The team also took a composite measure of those three safe practices.

"We must continue to develop, test, and disseminate programs that are aimed at promoting firearm safety and safe firearm storage."

Most of the respondents also said that they would be “comfortable” or “very comfortable” discussing safe firearm practices with safety counselors, though women were less likely to feel that way than men.

The lead researcher, Dr. Joseph Simonetti of the VA Eastern Colorado Health Care System, says it is unclear why the lock box program, or others like it, was effective in promoting safe firearm storage.

“Perhaps the general messaging of promoting firearm safety influenced firearm owners’ decisions around safe firearm storage, or served as a reminder to re-evaluate how they or their household members were storing guns at home,” Simonetti says. “We already know from mountains of behavioral health economic research that eliminating barriers to making health-related behavior changes increases your chances of success. Some homeowners may have already wanted to increase their firearm safety practices but didn’t have the tangible resources to do so. In that case, providing the lock box would be essential.”

Each year, gun violence results in tens of thousands of deaths and injuries in the United States. About one-fifth of the violent incidents are self-inflicted, with firearms serving as the most common method of suicide, which has reached alarming levels in the Veteran community. Many other gun tragedies are accidentally caused by children and adolescents.

Observational studies and randomized controlled trials have linked safe storage of firearms to fewer deaths and injuries. Public health and medical associations, as well as gun advocates and retailers, recommend safe storage practices. Nonetheless, many people do not store their firearms safely, leading to a slew of unfortunate incidents.

Simonetti and his team thus set out to identify ways to promote safer firearm storage in the community, where evidence of the effectiveness of gun safety intervention programs is limited.

Two 2015 community-based firearm safety events in Washington state served as the springboard for their study. The events took place at sporting goods stores that sell guns. The participants, all of whom were at least 18 years old, received a safety message, their choice of a free firearm safety device–a lock box or trigger lock–and demonstrations by staff of how to use both items. The participants then practiced using a lock box and trigger lock with a mock firearm.

The researchers note that this was the first gun safety program they know of to allow participants to choose between different free firearm locking devices.

The safety messages included recommendations to store firearms unloaded and locked using a device such as a safe, lock box, trigger lock, or chamber lock; to store ammunition in a locked place separate from firearms; and to consider removing firearms from the home if a family member is depressed, suicidal, or abusing drugs or alcohol.

More than 400 people who attended the safety events completed a survey that assessed household demographics and firearm ownership characteristics and storage practices. They were also offered their choice of a $30 lock box that could store ammunition or a handgun with limited ammunition, and that included cable and bolt mechanisms for attachment to external items; or a $15 trigger lock that was compatible with a handgun or rifle. Both devices had a three-number combination for access.

More than half of those who attended the safety events (206) completed a follow-up telephone survey about a month later and were included in the study. Of that group, 87 percent had agreed to use a lock box and 12 percent had chosen the trigger lock. The rest did not accept a safety device.

Ninety-three percent, or 192 of 206, reported the presence of a firearm in the household at baseline, a figure that dropped to 91 percent at follow-up. Seventy-five percent (155) reported at follow-up they were using the provided safety device to secure a household firearm. The results also showed that

’One size fits all’ approach not enough

According to the researchers, differences in participant preferences for safety devices and safety counselors suggest that a “one size fits all” approach may be inadequate.

“Firearm safety devices are not different from other consumer products,” Simonetti says. “When I buy a T-shirt, I care about the fit, color, style, cost, and quality. This study confirms our suspicion that firearm owners have strong preferences for the devices they use. A ‘one size fits all’ approach is not going to reach everyone.”

He adds: “If about 10 percent of the target population won’t use a device, then various devices are needed for the intervention. This is problematic in that most prior [firearm safety] studies and most ongoing studies are only providing a single device option. Often times, due to financial limitations, it is the less popular trigger lock or cable lock options. The lock box does not work for long guns, so regardless of its popularity, other options are needed.”

Simonetti and his colleagues believe continued efforts are needed to improve the effectiveness of firearm storage safety programs in various populations and to expand their scale. Both approaches may be “effective in reducing the substantial physical, emotional, and economic burden of firearm injuries in the U.S. and elsewhere,” they write.

“This study provides preliminary evidence that a community-based event such as ours can promote safe firearm storage practices,” Simonetti says. “The next step is to test this program in a larger study that includes a control group to support its broader dissemination if proven effective. We must continue to develop, test, and disseminate programs that are aimed at promoting firearm safety and safe firearm storage.”