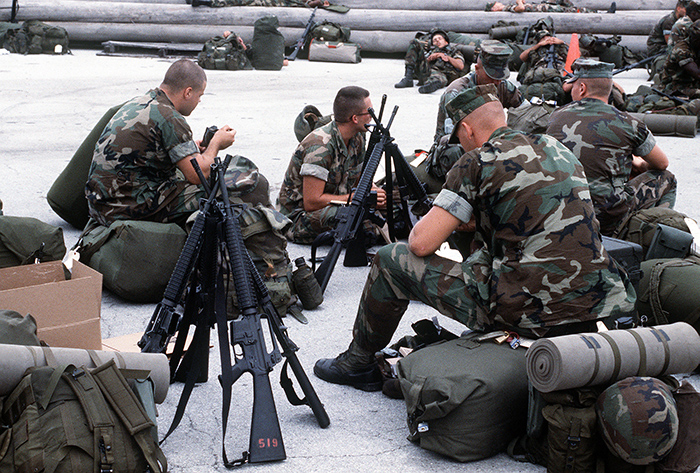 Marines wait to board Navy ships for transport to the Persian Gulf region for Operation Desert Shield in 1991. VA researchers recently reported on a new resource for conducting studies on Gulf War Veterans' health. (Photo by Lance Cpl. Graham)


While researchers in VA and elsewhere have been studying Gulf War Veterans' health problems since the 1990s, there are still more questions than answers—much to the vexation of many Gulf War Vets and their families, and of researchers themselves.

"Some studies could certainly address Gulf War illness, but there may be other studies that would like to assess rates of various diseases related to aging, such as cancer and heart disease."

"We regularly attend the RAC (VA Research Advisory Committee on Gulf War Veterans' Illnesses), and we hear directly from Veterans about their frustrations," says Sims.

Sims and a team supported by VA's Office of Research and Development have built a new resource, the Gulf War Era Cohort and Biorepository, they hope will help address some of the lingering questions on Gulf War Veterans' health problems.

It's a "cohort"—the term researchers use for a group of people being studied. The new cohort includes 1,275 men and women who served during the Gulf War era in the early 1990s. They have completed surveys, agreed to have their medical records accessed, and provided blood samples from which DNA has been extracted. The study began recruitment in 2014 and ended in 2016.

The researchers tell how the group was assembled and describe their health, military, and demographic status in a recent article in the American Journal of Epidemiology.

What makes the new cohort unique in the realm of VA research is that it includes both those who use VA for their health care and those who don't.

"Typically in VA-funded research, the Veterans are enrolled in studies at the VA medical centers where they receive care," notes Dr. Dawn Provenzale, chair of the Gulf War Era cohort project. She is also a gastroenterologist and professor at Duke University.

Provenzale says one purpose of the cohort project was to test the feasibility of enrolling Veterans from both within and outside the VA system. Slightly more than half the Veterans who signed up for the study were not VA patients. She explains how that process worked:

"We used a model that allowed a contractor to enroll the Veterans by phone, with mailed consent forms, and a mailed survey. Once the consenting process was complete, with the return of the signed consent form, a phlebotomist went to the Veterans' homes, or other locations, to draw the blood for the repository."

Importantly, the study recruited Veterans regardless of health status—whether they were reporting symptoms consistent with Gulf War illness, or noting other symptoms and diagnoses—or whether they reported being relatively healthy.

Sorting out the effects of age

Gulf War Veterans are now well into middle age, if not older. One goal of the cohort is to gain a better understanding of how aging and newly developed chronic diseases interact with health issues that may stem from Gulf War service.

"As this population of Veterans ages, comorbidities [accompanying illnesses] such as heart disease, diabetes, and cancer are more likely to show up," says Sims. "That is part of the challenge—distinguishing what is a Gulf War illness-related symptom, and what is related to a comorbidity. We need to suss this out better while we can."

The VA researchers also aimed to build a cohort that was diverse in other ways, as well.

"We included Veterans who served anywhere during the 1991 time frame," notes Sims. This means the cohort includes Veterans who were deployed to the Gulf and those who were not deployed.

Provenzale adds: "We opened this cohort to all who wished to join. By including non-users [of VA health care], we hoped to get a representative sample. Also, we purposely sampled to include Veterans from throughout the United States, to ensure we had good urban-rural distribution. We also wanted substantial representation among minorities and women, so we purposely oversampled those groups."

About three-quarters of the cohort is male. About 72 percent are white, 21 percent African American, and 9 percent Latino. About 70 percent deployed to the Gulf. A full breakdown of the demographics is included in the article online.

The benefits of blood samples

The blood samples—from which DNA has been extracted for genetic studies—are another key feature of the cohort.

On a recently created web page designed for researchers in and outside VA, CSP maintains a list of VA and non-VA epidemiology studies involving Veterans of various eras. Nearly a dozen of them focus exclusively on Gulf War Vets—including the Gulf War cohort managed by CSP.

Blood samples from the new Gulf War Era Cohort and Biorepository are being stored and processed at the same VA Boston facility that handles Million Veteran Program samples. (Photo by Derrick Morin)

Blood samples from the new Gulf War Era Cohort and Biorepository are being stored and processed at the same VA Boston facility that handles Million Veteran Program samples. (Photo by Derrick Morin)

One, for example, is the well-known National Health Survey of Gulf War Veterans and their Families, also known as the Longitudinal Health Study of Gulf War Era Veterans. Supported by VA, this study initially surveyed Veterans in 1995 and has conducted follow-up studies in 2005 and 2012—2013. The latest follow-up included more than 14,000 Veterans. The work has been important in documenting the ongoing health problems experienced by many Gulf War Veterans.

But while other studies have included far more Gulf War Veterans, and in some cases followed them over many years, most of this research has been based only on self-report questionnaires, in which Veterans answered extensive questions about their health and military experiences. With one exception, the new CSP Gulf War Era Cohort and Biorepository is the only one that has collected blood samples for DNA testing.

The exception is a new study involving VA's Million Veteran Program. Co-led by Provenzale, it targets approximately 100,000 Gulf War Veterans enrolled in MVP. The study will collect additional information on these Veterans' Gulf War experiences, to complement the blood samples and other health and military-exposure data they already provided.

The MVP database, however, as large as it is—as of the end of August 2018, more than 695,000 Veterans overall had enrolled—currently includes only Veterans enrolled in VA care. (Plans are in the works to eventually expand it to Veterans outside of VA care, and to include active duty military personnel.) Patients in the VA health system, on the whole, tend to be sicker than the general Veteran population in the U.S., so the cohort sample may be more balanced, in that regard, than the MVP sample.

Sims emphasizes that her group's main task was to build a cohort for researchers—in and outside VA—to investigate some of the unanswered research questions most relevant to Gulf War veterans. The team is expecting their recent journal article will draw the attention of researchers interested in studying health conditions among Gulf War veterans. They've already received a few queries.

Provenzale: "Some studies could certainly address Gulf War illness, but there may be other studies that would like to assess rates of various diseases related to aging, such as cancer and heart disease."

The Durham CSP Epidemiology Center will make the data available to qualified researchers, with privacy safeguards in place. For example, it will be stripped of names and social security numbers.

Genome-wide association study in the works

The Durham team does have funding from ORD to conduct its own GWAS, or genome-wide association study. Working with VA's Pharmacogenomics Analysis in Little Rock, Arkansas, the researchers will examine the entire gene sets of the Veterans in the study and look for patterns of association with various health conditions.

This work, along with MVP, could lead to new genetic insights, which in turn could help pinpoint a biochemical pathway to target therapeutically. That has remained an elusive goal for researchers.