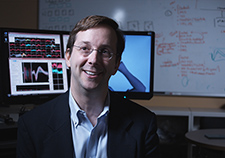 Dr. Leigh Hochberg is with Brown University and VA's Center for Neurorestoration and Neurotechnology. (Photo by Udris Film)

Dr. Leigh Hochberg is with Brown University and VA's Center for Neurorestoration and Neurotechnology. (Photo by Udris Film)

In the latest report on BrainGate, an investigational device that allows people with paralysis to control computer cursors just by thinking about the movement of their own hand, researchers describe the best performance yet by study volunteers using the system.

The report is in the October 2015 issue of Nature Medicine.

"We continue to evolve our system, particularly the 'decoder' that translates intended movement into action," said Dr. Leigh Hochberg, part of the study team. "By more than doubling the rate at which users acquire targets on a screen, we are moving closer to enabling Veterans and others with ALS or other forms of paralysis to use this technology for everyday activities."

Hochberg is a neurologist with Brown University and director of the Center for Neurorestoration and Neurotechnology at the Providence VA Medical Center. He and BrainGate pioneer Dr. John Donoghue led early work on the system and now collaborate with partners at several institutions.

The BrainGate system involves an electrode array the size of a baby aspirin that gets implanted in the brain's motor cortex. (Photo courtesy of BrainGate)

The BrainGate system involves an electrode array the size of a baby aspirin that gets implanted in the brain's motor cortex. (Photo courtesy of BrainGate)

BrainGate uses a tiny electode array, the size of a baby aspirin, implanted in a part of the brain that controls movement. The electrode array picks up brain signals that then get decoded by an external computer and translated into commands for computers, robotic arms, or other devices. The researchers plan to eventually make the system wireless.

The new study involved two volunteers diagnosed with amyotropic lateral sclerosis, or ALS, also known as Lou Gehrig's disease. The disease destroys cells in the spinal cord and brain and causes gradual muscle wasting and loss of movement. Only 1 in 5 people with the condition survives beyond five years. While scientists seek therapies to slow or cure ALS, BrainGate and similar technologies in the works focus on restoring communication, mobility, and independence for patients. The work also has applications for those with spinal cord injury, stroke, or limb loss.

To help test recent enhancements to the technology, the two participants performed a variety of computer tasks, using only the intention to move their hand. In one part of the study, they were able to move a cursor to catch up to a large green dot that moved around the screen, changing position every few seconds.

In another task, a circular pattern of eight circular targets appeared, with another target in the middle. The participants had to maneuver the cursor back and forth between the center target and randomly selected outer targets.

In another experiment, one of the participants typed a few sentences by moving the cursor to select letters from an on-screen display. She was able to type about six words per minute.

Videos of the experiments can be seen on the journal's website.

Overall, the volunteers were able to do the tasks more than twice as fast as participants doing similar tasks in BrainGate studies up till now.

The researchers say the advances are due to a number of improvements in the system. For example, the study engineers were better able to filter out background noise from the brain signals coming from the motor cortex.

The team also refined the algorithim that turns brain signals into computer commands, and the way they calibrate it based on participants' intended hand or finger movements. As part of the study, the team tested two algorithims head to head. They measured how long it took the participants to perform tasks with each one. They also asked the volunteers to rate, on a scale of zero to 10, how much mental effort it took them to peform the tasks.

The team expects to continue refining the hardware and software through additional clinical trials and feedback from users.

"This study has its roots in publicly funded, fundamental neuroscience research, which is now being translated into novel neurotechnologies to help Veterans and others with paralysis," notes Hochberg. "The insights and feedback from our incredible study participants are helping us to make continued progress toward clinically useful devices."

Funding for the work came from VA, the National Institutes of Health, Stanford University, and the Craig H. Neilsen Foundation.