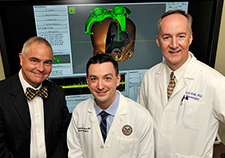 Doctors at the VA Greater Los Angeles Healthcare System have performed the first-ever trial of deep brain stimulation to treat posttraumatic stress disorder. The patient is a Gulf War Veteran whose traumatic nightmares and other PTSD symptoms had failed to respond adequately to standard treatments, including medications and psychotherapy.

After 10 months with two electrodes stimulating the amygdala on either side of his brain, the 48-year-old patient has shown dramatic improvement, report the researchers. Namely, his nightmares are far less frequent and intense. He's not cured of PTSD, but his quality of life has improved significantly.

"The nightmares have improved tremendously," says Dr. Jean-Philippe Langevin, the VA neurosurgeon who performed the procedure. "From a human perspective, it's pretty compelling."

A report from Langevin's team is now in press at Biological Psychiatry.

Dr. Ralph J. Koek, a VA psychiatrist who is part of the research team, notes that "before the procedure, this patient was experiencing nightmares virtually every night, and he was rating the intensity a 10 out of 10. Now, we've seen a complete downtrend. He has had fewer than five nightmares in the past 10 months Along with this, his sleep has improved dramatically. He used to sleep one or two hours a night. He would get up every 15 minutes. Now, he's able to sleep five to six hours continuously."

Koek adds, "Notably, he has had no abnormalities on extensive neuropsychological monitoring."

Since the procedure, the Veteran has also experienced better moods and emotional control. He reports being able to travel abroad for the first time in many years. The researchers say that since they published their findings, the patient has reported yet further improvements.

Conventional treatment for PTSD involves antidepressants or psychotherapy, or a combination. Some patients, though, fail to respond to these and other therapies. That can leave them coping with disabling psychiatric symptoms for decades. Their risk increases for substance abuse, physical illness, and suicide.

Deep brain stimulation is approved by the Food and Drug Administration to treat Parkinson's disease and a related condition called essential tremor. It can also be used, in certain circumstances, to treat obsessive-compulsive disorder. The new VA study is the first time it has been tried in a patient with PTSD.

In the study, Langevin's team first used PET scans to verify the brain areas involved in the patient's PTSD symptoms. A body of literature, including animal studies and human brain-imaging studies, has implicated the amygdala, an almond shaped-cluster of neurons found on either side of the brain. It helps control emotion, memory, and other functions. As the patient recalled his traumas while being scanned, this area showed increased metabolism, consistent with the literature.

Langevin then drilled two small holes in the skull and implanted the electrodes, each of which is 1.27 mm in diameter—thinner than a strand of spaghetti.

Then, he ran a thin wire under the skin to a pacemaker-like device, about the size of a stopwatch, which was placed under the skin near the collarbone. The device contains a long-lasting battery and a stimulator that can be controlled through an external programmer.

The patient remains awake during the procedure, which takes around four hours.

The theory is that the small electrical current from the stimulator calms down the amygdala. This aids in fear extinction. Basically, the person no longer feels the same fear in response to the traumatic memories. Similar effects had been shown with a rodent model of PTSD in a preclinical study by Langevin and colleague Dr. Scott Krahl, a neuroscientist at the VA Greater Los Angeles Healthcare System.

The study volunteer and the clinicians who assessed his PTSD were "blinded" for the first two months as to whether the stimulator was off or on, so they would not be biased in reporting and scoring any changes in symptoms.

At six months, the Veteran did experience a worsening of his symptoms after the stimulation was increased. The problem was resolved, and Langevin's team notes in their report that more gradual adjustments may have been called for, to allow the patient to adequately adapt.

Langevin says getting some relief from debilitating PTSD, and being able to focus for the first time in decades on other aspects of life, is a major adjustment—a positive one—for a person to undergo.

"It's a bit like releasing someone from prison. All of a sudden, their environment is completely different. For a long time, fear dictated what they did every day. Now, they have to make decisions and choices. It requires a new set of skills."

Langevin says that based on what is known about deep brain stimulation for Parkinson's disease and other conditions, it's likely the electrodes will have to remain in place during the remainder of the patient's life. They can be safely removed, though, if the need ever arises.

The team is now recruiting additional patients for the procedure. They plan to do only one procedure every six months or so, so they can carefully observe each patient and learn from his experience with the therapy.

In addition to their VA affiliations, Langevin, Koek, and Krahl are with the University of California, Los Angeles. Langevin and Krahl are listed as inventors on a patent application describing the use of deep brain stimulation for PTSD, filed by UCLA and VA.