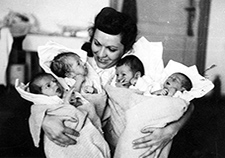 Photo shows babies born to Holocaust survivors in a displaced persons camp in Germany after World War II. Dr. Rachel Yehuda has studied how parents' traumas can be genetically transmitted to their offspring. (Photo courtesy of yadvashem.org)

Photo shows babies born to Holocaust survivors in a displaced persons camp in Germany after World War II. Dr. Rachel Yehuda has studied how parents' traumas can be genetically transmitted to their offspring. (Photo courtesy of yadvashem.org)


Dr. Rachel Yehuda, a neuroscientist at the James J. Peters Veterans Affairs Medical Center in the Bronx, New York, has spent decades studying the biological roots of PTSD in relation to Veterans, Holocaust survivors, and other trauma victims.

The daughter of Israeli parents, one of whom was a rabbi, Yehuda grew up in Cleveland with many people who survived Nazi concentration camps. She heard stories of inmates who were tortured and brutally murdered, and she learned of the toll on those who withstood the cruelty. She also sensed that children of Holocaust survivors were emotionally vulnerable.

"In the 1970s, we had discussions about whether the Holocaust could happen again in the United States," Yehuda said in an appearance earlier this year at The Green Space in New York City. "I guess I felt safe, but I could see that my friends who had Holocaust survivor parents were in some way preparing for this."

Children of survivors struggle with anxiety more than with depression, PTSD

Many Holocaust survivors have PTSD and other emotional disorders, and it's well-known that children of traumatized people are at increased risk for PTSD. Yehuda, long eager to study the children of concentration camp survivors, took the connection one step further in research published Sept. 1, 2016, in Biological Psychiatry.

She and her colleagues showed for the first time in humans that epigenetic changes caused by exposure to trauma can be passed on to children born after the event—in this case Holocaust survivors and their adult children. Epigenetic processes alter the expression of a gene without producing changes in the DNA sequence and can be transmitted to the next generation.

"What happens to our parents, or perhaps even to our grandparents or previous generations, may help shape who we are on a fundamental molecular level."

Her study yields insight into how severe psychophysiological trauma can have intergenerational effects. "These observations suggest that parental trauma is a relevant contributor to offspring biology," Yehuda says.

The researchers focused on FKBP5, a stress gene linked to PTSD, depression, and mood and anxiety disorders. The results suggest that Holocaust exposure had an effect on FKBP5 methylation—a mechanism that controls the gene's expression—that was observed in parents exposed to the horrors of the concentration camps, as well as their offspring, many of whom showed signs of depression and anxiety. 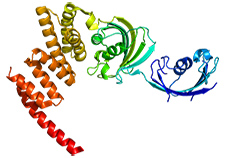 A stress gene known as FKBP5 figures prominently in Dr. Rachel Yehuda's findings on how trauma may be transmitted from one generation to the next. The ribbon drawing depicts the protein coded for by the gene. (Image via Wikimedia Commons)

A stress gene known as FKBP5 figures prominently in Dr. Rachel Yehuda's findings on how trauma may be transmitted from one generation to the next. The ribbon drawing depicts the protein coded for by the gene. (Image via Wikimedia Commons)


The research, Yehuda says, did not demonstrate "transmission" of PTSD, only that the parent's experience is somehow related to their offspring's phenotype and biology. Phenotype is an organism's physical appearance and behavior, as determined by genetic and environmental influences.

"The message of the study is that we respond to our environments in multiple ways that can have long-lasting, transformative effects," Yehuda says. "The implications are that what happens to our parents, or perhaps even to our grandparents or previous generations, may help shape who we are on a fundamental molecular level that contributes to our behaviors, beliefs, strengths, and vulnerabilities."

She says the researchers pursued this study because offspring of Holocaust survivors "said to us in clinic, 'we are casualties of the Holocaust and need treatment.'" Her team tested blood samples of 32 Holocaust survivors and 22 of their adult children for methylation of intron 7, an area in the FKBP5 gene. For a control group, they analyzed Jewish parents who lived outside of Europe during World War II—most were U.S.- or Canadian-born—and their offspring.

"The observation that the changes in parent and child are in opposing directions suggests that children of traumatized parents are not simply born with a PTSD-like biology," Dr. John Krystal, a research psychiatrist at the VA Connecticut Healthcare System and editor of Biological Psychiatry, said in a news release. "[The children] may inherit traits that promote resilience as well as vulnerability."

In any case, the findings indicate it may be possible to distinguish changes associated with early adverse experiences in offspring from those linked to trauma in past generations.

"The study raises important questions about the intergenerational transmission of traits from traumatized parents to their children," said Krystal, himself the son of a Holocaust survivor. "The observation that the same genes might be affected in parents and children suggests that something specific, perhaps related to stress response, is being conveyed from parent to child."

Findings likely to apply to Veterans

Yehuda says there is nothing inherently "Jewish" about the phenomenon. There is reason to believe the findings would apply to Veterans, she says, and the theories for explaining epigenetic effects in their children, as in Holocaust survivors, would not be limited to traumatic circumstances before birth. One of her team members is looking at sperm cells of Vets to learn more about this, she notes.

Furthermore, it is "enormously difficult" to determine if epigenetic effects on offspring are biologically transmitted from the mother, father, or both parents, or if they stem from factors such as behavioral influences after birth, Yehuda says.

"But the idea that there may be a molecular mechanism behind these demonstrations seems to be interesting to people," she says, "because perhaps offspring were shaped very early in development, beginning even at preconception in the gametes of one or both of their parents. We just don't know."

There is huge interest in developing treatments to target epigenetic abnormalities, according to Krystal, noting that these approaches are at very early testing stages for treating psychiatric disorders.

Children of survivors struggle with anxiety more than with depression, PTSD

New research from a team that involved a VA researcher finds that children of Holocaust survivors are experiencing generalized anxiety disorder—a condition marked by excessive, uncontrollable, and irrational worry—more than depression and PTSD.

Researchers for the study, published Sept. 19, 2016, in Psychological Trauma: Theory, Research, Practice, and Policy, say the findings must be taken with "caution" in part because only 190 people were interviewed. However, the results suggest that attention has been disproportionately focused on PTSD for children of Holocaust survivors as opposed to anxiety, the researchers say.

"That GAD was more frequent than PTSD among these children of survivors makes clinical sense," the researchers write. "The parents were directly traumatized by their Holocaust and post-Holocaust experiences. The children were exposed not to the traumas themselves but to their parents' stories and their aftermath, including, among others, the message that the world is a dangerous place where the children must be on guard against threats, big and small."