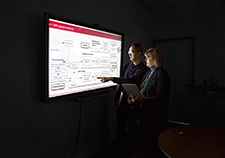 Dr. Jennifer Garvin and doctoral student Youngjun Kim review the architecture of the CHIEF system, which uses natural language processing to extract information from the electronic records of heart failure patients, to help improve their care.(Photo by Tod Peterson)

Dr. Jennifer Garvin and doctoral student Youngjun Kim review the architecture of the CHIEF system, which uses natural language processing to extract information from the electronic records of heart failure patients, to help improve their care.(Photo by Tod Peterson)


A specialist in biomedical informatics, Dr. Jennifer Garvin has long been interested in improving the care of heart failure patients through evidence-based medical therapy. Cardiovascular disease, the number-one killer of Americans, is the leading cause of hospitalization in VA.

She focused on the use of natural language processing, technology similar to that used by IBM Watson in VA. It allows computers to make sense of free text, such as that found in doctors' notes. She planned to put the technology to work reviewing electronic health record documents, hoping it would eliminate the need for doctors to invest hours and hours into manually doing the same.

"The overall goal was to reduce the burden on primary care providers and the health care system, to undertake quality measurements, and to use the data in applications such as clinical decision support," Garvin says.

A VA study led by Garvin shed light on the capabilities of a new automated tool, the Congestive Heart Failure Information Extraction Framework, otherwise known as CHIEF. It is part of the Automated Data Acquisition for Heart Failure project, her VHA endeavor aimed at improving the care of heart failure patients.

Garvin's study shows that an extraction system has the potential to virtually eliminate the need for primary care providers to conduct tedious searches in free text for critical details. After accessing data on his or her patient through the VA electronic health record in the standard way, a clinician can have a summary from CHIEF to see if that patient, for example, is receiving proper medication for cardiovascular disease. The result is a streamlined document review system for patients with congestive heart failure.

Through the CHIEF software prototype, VA can also accurately process Veterans' records with minimal to no manual chart review to learn if they received recommended care, suggests Garvin's research. Use of the technology aligns with the VA Blueprint for Excellence, which offers strategies for VA to evolve as a model health care provider, and other strategic initiatives.

The study, published recently in the Journal of the American Medical Informatics Association, included 1,083 heart failure patients who were discharged from VHA medical centers in 2008 and 2009. Clinical notes were extracted from the patients' electronic health records stored in the VHA Corporate Data Warehouse. CHIEF scanned the records and processed the data into a table that allowed for analysis.

Researchers gauged the effectiveness of CHIEF based on these factors:

The software hunted for references to two drug therapies recommended by the American College of Cardiology Foundation and the American Heart Association. The medications are widely prescribed for primary hypertension with the aim or reducing mortality rates: angiotensin converting enzyme inhibitors and angiotensin receptor blockers. The latter is an alternative for patients who can't take inhibitors.

"The more text documents we have, the better we can train the system so it can learn from various presentations of the data."

The researchers defined accuracy by two methods. "Recall" measures what percent of positive events were correctly predicted, such as prescribing the recommended drugs. "Precision" measures what percent of positive predictions were correct. With an accuracy rate of at least 95 percent, CHIEF found mentions in the clinical notes of the two drug therapies and of "left ventricular ejection fraction"—the percentage of blood leaving the heart each time it extracts. It also found quantitative values of this important clinical indicator.

The reasons patients did not take prescribed medications were more difficult to extract. On this front, CHIEF achieved only a 40 percent success rate at best. Garvin's team has been working to improve that aspect.

"The lower accuracy is most likely because the number of patients with reasons not to have these medications prescribed is low," she says, "and there is a lot of variation in how the reasons are written and where they are located in the documents. The rarity of the reasons why patients should not be prescribed these medications makes it harder for CHIEF to learn to process this information."

Large numbers of records are needed to find the many reasons why patients are not prescribed evidence-based medications, she notes.

CHIEF may be used to study other aspects of heart failure

Garvin says her team focused on congestive heart failure because of its prevalence in Veterans and the U.S. population in general.

"Congestive heart failure is associated with difficult and recurring symptoms, suffering by both the patient and the family, and a decreased lifespan following diagnosis of this condition," she says. "The use of evidence-based treatments can decrease symptoms, improve patient functioning, and prolong life."

Garvin says her group may now try to use the software to better understand other aspects of heart failure, such as how patients go from one stage of the condition to the next. She is also interested in testing CHIEF's ability to extract information on other illnesses.

The CHIEF system has great potential, Garvin says, with both recall and precision now at least 95 percent accuracy for most information. Further improvements, she says, could focus on teaching CHIEF to accurately extract reasons for not prescribing recommended medications, and to read data addressing other aspects of heart failure.

If the research pans out, says Garvin, CHIEF could be implemented throughout the VA health care system to process larger volumes of data on a variety of Veteran ailments.

"This would improve recall and precision," she says. "The more text documents we have, the better we can train the system so it can learn from various presentations of the data."

Garvin's team included University of Utah researchers Dr. Stephan Meystre, who designed the CHIEF software prototype, as well as Youngjun Kim and Drs. Glenn Gobbel and Michael Matheny, all of whom helped Meystre develop the technology.