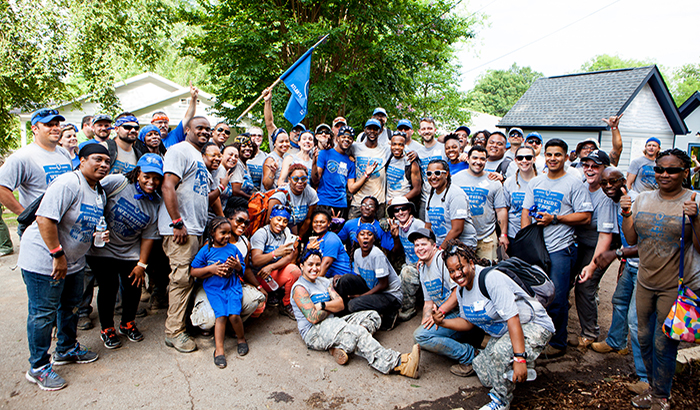 Many Team Rubicon volunteers took part in rescue efforts in the aftermath of Hurricane Harvey, which ravaged parts of southeastern Texas in August 2017. Here, former Army Green Beret Brighton Timmins (L) and firefighter Samson Rivera pull a disabled truck out of the way of a home in Rockport, Texas. (Photo by Matt Mateiescu

Many Team Rubicon volunteers took part in rescue efforts in the aftermath of Hurricane Harvey, which ravaged parts of southeastern Texas in August 2017. Here, former Army Green Beret Brighton Timmins (L) and firefighter Samson Rivera pull a disabled truck out of the way of a home in Rockport, Texas. (Photo by Matt Mateiescu)

Mason Leist calls it his most “terrifying” experience ever. On Jan. 7, 2014, he and his Army platoon were ambushed by enemy fighters near the Afghan city of Kandahar and came under intense gunfire. He hid underneath a truck for about 15 minutes as bullets landed inches away, but he managed to radio for help. An Army vehicle arrived, allowing him and his comrades to escape.

In Leist’s mind, the incident didn’t end there. Flashbacks from that harrowing day and other stressful events during his deployment in Afghanistan contributed to a PTSD diagnosis in March 2015, a year after he left the Army. His symptoms included severe anger outbursts and feelings of depression–as well as a fear of his surroundings.

“I had a problem with letting people get close to me because I didn’t trust anyone,” he says. “I felt that the world was an evil and dangerous place, and I was constantly on guard trying to keep myself alive. Isolating myself made it incredibly difficult to make friends or even keep the relationships I had.”

Leist soon began attending support group sessions at the PTSD Foundation of America, where his mentor convinced him to sign up with The Mission Continues (TMC). That organization helps Vets who are adjusting to life at home find purpose through community service. Under TMC, he completed a fellowship that was hosted by the PTSD Foundation of America, where he learned to become a peer mentor to Veterans struggling with the condition. 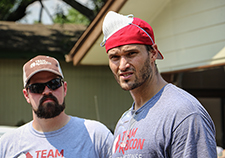 Partly because of his work with The Mission Continues, Leist was able to win his bout with PTSD.

“The fellowship program gave me the chance to find my calling since I separated from the military,” he says. “I highly recommend the program to other Veterans because it presented me with the opportunity to again serve a purpose higher than myself, and to reach out and be boots on the ground.”

The battle rages on for many

After more than 16 years of war in Iraq and Afghanistan, nearly 3 million Americans who fought in those conflicts have returned home. But studies have shown that Veteran reintegration, the process by which returning service members resume roles in the family, community, and workplace, can be a battle in itself. Many Vets struggle with PTSD and traumatic brain injury, as well as feelings of isolation, depression, and anxiety. Such conditions can fuel unemployment, marital instability, social isolation, and homelessness.

Just the vacuum that exists from no longer being a part of military life and the camaraderie it fosters can pose a challenge.

Organizations such as Team Rubicon (TR) and The Mission Continues can help ease the transition.

TR responds to natural disasters in the U.S. and around the world, uniting former service members with first responders in emergency response teams. Under the Mission Continues, Veterans work alongside non-profit partners and community leaders. They might help out in schools, for example, or mentor at-risk youth.

Team Rubicon has nearly 50,000 volunteers, 7 in 10 of whom are Veterans. It has carried out more than 200 operations since its founding seven years ago, mainly natural disasters such as hurricanes, tornadoes, floods, and earthquakes. Nearly all of the operations have been in the U.S. About 20 to 40 volunteers are deployed on each mission. Hundreds of TR members helped with disaster relief earlier this year after hurricanes Harvey, Irma, and Maria caused widespread destruction in Texas, Florida, and Puerto Rico.

Since its inception, Team Rubicon has provided $11.5 million worth of volunteer labor to communities impacted by disasters. The organization's motto is "we do chaos."

TR co-founder Jake Wood, a former Marine, says when Veterans are able to apply their military skills to help others, they gain a renewed sense of purpose.

"We first saw this anecdotally as we would converse with volunteers coming back from missions in the field," Wood says. "We would hear this common refrain among them, something like, 'I never thought I'd feel like this again.' When we tried to distill what 'this' was, the themes we most often encountered were purpose, community, and identity. It wasn't just from the Vets. A spouse would say, 'Thank you for giving me my husband or wife back. They returned from a Team Rubicon mission, and they were the person that I married again.' That's pretty powerful testimony."

"The fellowship program gave me the chance to find my calling since I separated from the military,"

'A band of brothers, a band of sisters'

“Most respondents said the bonds created within Team Rubicon were as strong [as] or stronger than those they had created in the military,” he says. “It’s pretty compelling when you think in the context of a band of brothers, a band of sisters. To be able to recreate that post-military is pretty profound.”

He adds: “There’s such a pride in belonging that comes with participation in Team Rubicon. We generally refer to our volunteers as gray shirts, kind of referencing the uniform that they wear when they’re in operation. There’s this pride in uniform, pride in belonging that makes people proud to look in the mirror and see the face that’s looking back at them. A lot of people claim that their post-military identity was floundering until they came into the organization.”

The Veterans Emergency Management Evaluation Center (VEMEC), a VA office that conducts research and provides training to help solve emergency management problems facing the agency, has collaborated with TR on training activities and studies. The studies show there are positive mental health effects on Veterans when they engage in disaster relief.

A VEMEC case study published in March 2017 examined the feeling of empowerment that a single combat Veteran with PTSD felt while engaging in peer-led disaster response activities with Team Rubicon.

“Many smaller communities lack the depth and experience of personnel to respond effectively after a disaster,” says the study’s lead author, VEMEC Director Dr. Aram Dobalian. “TR volunteers have been a major help in that regard. Moreover, for many Veterans, this serves as an opportunity for them to give back in a way they haven’t been able to do so since leaving the military. It provides a strong sense of community for many Veterans and has helped pave the way for many to find jobs and become better acclimated to civilian life.”

“[Those conflicts] have been sort of nebulous, and the gains are so ethereal, that it’s hard to really point at them and say, `I gave all this time, all this effort, sacrificed myself, watched my friends die, and we got X out of it,’ ” he says. “A lot of the big wars like World War II, you can see people sacrificed, but we got a result out of it. We don’t have that with these wars. I don’t know if we ever will. So it’s sort of a feeling of what it was all really about.”

Hanna contrasts this with TR, which he says can give Veterans an “instant sense of gratification,” plus the satisfaction they are again being accepted in the community. Case in point: Last year, he and his TR  buddies chopped up and removed a large birch tree that fell in a woman’s backyard following a tornado in Wyoming, Michigan. The women asked Hanna how much the work would cost. He told her it wouldn’t cost anything, noting that he and the other Vets were just happy to help her.

“You talk to a homeowner, and they’re there on the worst day of their life,” he says. “They’re looking at their house, 30 years old or whatever, and it’s in ruins, and they just don’t even know where to start. So when you go in with a team and get it cleaned up and get everything out of their way, you can see the weight getting lifted off them. It’s like this feeling of we came out here and struggled and sweated, but we really helped this person. For our members, that’s a huge mental benefit, to see how they can directly contribute, how they can directly help people in a way that many people don’t get out of the military.”

The Mission Continues, for its part, has teamed up over the past decade with more than 900 community and civic organizations that provide volunteer opportunities for Veterans. The organizations range from large national groups like the American Red Cross and Habitat for Humanity to local ones such as Recipe for Success in Houston and Future Foundation in Atlanta.

In 2016, work through TMC amounted to $4.7 million in value to communities.

“We have Veterans who are communications professionals, engineers, carpenters, and logisticians who are applying those skills to their work in communities,” says Laura L’Esperance, a TMC official. “Many of the skills our Veterans use while working in their communities are the intangibles of military service. They bring hard-earned leadership, exemplary training, and a mission-focused work ethic that is in short supply today. They do not do quit.”

Dr. Monica Matthieu, a specialist in mental health services at the Central Arkansas Veterans Healthcare System, has studied The Mission Continues fellowship program, in which post-9-11 Veterans volunteer with a nonprofit for six months in return for a stipend.

One of her studies, published in 2013, found that 55 percent of the Vets in the program screened positive for PTSD beforehand and 53 percent afterward. However, in the case of depression, 27 percent screened positive when the program started, compared with 13 percent afterward. Another study, published earlier this year in Psychiatry Research, found that volunteering through the program led to major improvements in physical and mental health and social outcomes.

“It’s a life transition, it’s a human issue,” she says. “People struggle with transitions because transitions are overwhelming and stressful. There’s a lot of ambivalence and unknown and a lot of new skills that people have to develop. And it’s not something that’s unique to this cohort. It happened in World Wars I and II, Korea, Vietnam. Every Veteran I’ve worked with has gone through a transition.”

Jake Wood is uncertain whether Team Rubicon has had a positive impact on Vets with PTSD, which he notes is “greatly misunderstood and as a result greatly misdiagnosed.” But he says the organization has had a huge effect on those experiencing isolation or symptoms that are often mischaracterized as PTSD.

He also says TR has anecdotal evidence it has played a role in convincing former service members not to die by suicide.

“Veterans have shared that with us,” he says. “They’ll say things like, `TR saved my life. I was at the brink of that decision, and this organization brought me back from the brink.’ I’ve heard that dozens of times, and that wouldn’t be an exaggeration.”