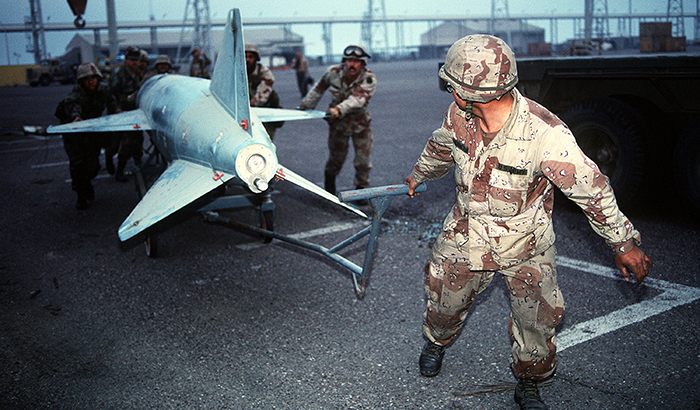 Soldiers pull an HV-2 Silkworm anti-ship missile left behind by retreating Iraqi troops across a pier as captured equipment and ordnance are prepared for shipment following Operation Desert Storm. (Photo by Joe Gawlowicz/DoD) 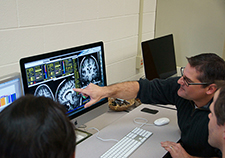 Dr. Dane Cook is a professor of kinesiology at the University of Wisconsin-Madison and a health scientist and research physiologist at the William S. Middleton Memorial Veterans Hospital. (Photo courtesy of UW)

Dr. Dane Cook is a professor of kinesiology at the University of Wisconsin-Madison and a health scientist and research physiologist at the William S. Middleton Memorial Veterans Hospital. (Photo courtesy of UW)

A study from the Madison VA Hospital in Wisconsin has shown that structural damage in the white matter of the brain may be linked to chronic musculoskeletal pain in Gulf War Veterans.

Using magnetic resonance imaging, the researchers found that participants with chronic pain had widespread disruptions in the structure of their white matter across several regions of the brain. White matter is deep tissue within the brain that contains axons, nerve fibers that conduct electrical signals and connect different areas of the brain. Many of the brain regions found to be affected in the study are involved in the interpretation of pain stimuli and the emotional aspects of pain perception.

The results showed that poorer white matter health was linked to higher pain levels. It was also connected with higher levels of fatigue and, to a lesser extent, depression. In the words of the researchers, “These data suggest that poor white matter health may contribute to the persistent widespread pain that is experienced by a significant number of Veterans who were deployed to the Persian Gulf.”

According to Dr. Dane E. Cook, corresponding author on the article, results such as these can provide objective evidence of a person’s subjective experience. He explains, “Changes in brain white matter show that there is something wrong in the central nervous system that may explain why the Veteran is experiencing widespread pain.”

"Changes in brain white matter show that there is something wrong in the central nervous system that may explain why the Veteran is experiencing widespread pain."

Chronic musculoskeletal pain affects around 25 percent of Veterans who were deployed during the Persian Gulf War. It is one of the cardinal symptoms of Gulf War illness, a chronic condition with a variety of symptoms that is largely medically unexplained. Veterans deployed to Iraq and Afghanistan more recently as part of operations Enduring Freedom and Iraqi Freedom have also shown similar rates of chronic musculoskeletal pain.

The patients in the Madison VA study with chronic pain also had lower quality of life and physical functioning than those without chronic pain, according to assessments given to each participant.

Evidence has suggested that Gulf War illness symptoms are related to structural changes in the brain. A 2008 report by the VA Research Advisory Committee on Gulf War Veterans’ Illnesses linked decreased white matter volume to Gulf War illness. In the new study, the researchers were looking for brain structural damage specifically linked to pain. To do so, they recruited 30 Veterans with chronic musculoskeletal pain from operations Desert Storm, Desert Shield, and Iraqi Freedom. They also tested 31 Veterans of these conflicts without chronic pain, for comparison.

The researchers took MRIs of each participant’s brain. They used a technique called diffusion tensor imaging to study the spread of water through the brain. Water tends to diffuse along the direction of the axons, the researchers explain, meaning that MRI can be used to map the structural integrity of white matter. One study by Georgetown University researchers was able to tell the difference between patients with Gulf War illness and those without by using diffusion mapping.

The disruptions in water diffusion found in the Madison VA study suggest that the myelin structure of axons is impaired in those with chronic pain, write the researchers. Myelin is a material that surrounds axons and nerve cells. It serves as an electrical insulator and allows the nervous system to function properly.

According to the researchers, the results could aid in testing and treatments designed to improve brain health. Understanding the connection between white matter damage and pain could lead to new testing and treatment techniques. However, they explain, “what is yet to be determined is whether these microstructural relationships are reversible with appropriate treatment, and whether changes in white matter structure will lead to improvements in symptoms.”

The next step, says Cook, is to test whether treatments aimed at relieving pain also change the white matter. The research team is in the final year of a clinical trial using exercise training as a treatment for Veterans with chronic pain. They are assessing both pain symptoms and white matter over time to test whether changes in white matter are related to changes in pain. Cook hopes that this ongoing study could lead to better treatments for chronic pain: “Our premise is that by targeting potential mechanisms of disease maintenance, we will be better able to target our treatments, a form of personalized medicine.”