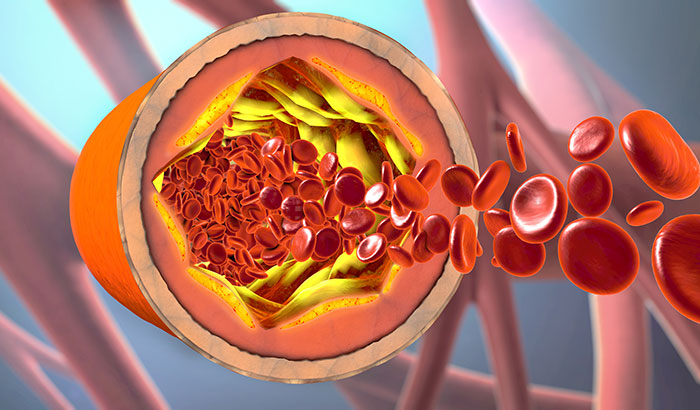 New research based on VA’s Million Veteran Program has identified genetic mutations that govern cholesterol levels. High levels of cholesterol in the blood can narrow arteries and increase the risk of a heart attack or stroke. (Illustration: ©iStock/man_at_mouse)

A team led by VA and Stanford University School of Medicine researchers has identified three genetic mutations that govern cholesterol levels. The finding could lead to the development of new drugs to treat cardiovascular disease and diabetes. The results appeared online Oct. 1 in the journal Nature Genetics.

Using data from VA’s Million Veteran Program, the researchers found that three genes—PDE3B, PCSK9, and ANGPTL4—could be targets for treatment of heart disease, abdominal aortic aneurysm, and diabetes, respectively. To find this, they looked at the genetic information of nearly 300,000 Veterans who had given blood samples to MVP. The analysis showed that those with specific mutations to these three genes had better cholesterol and triglyceride levels than those without the mutations.

The Nature Genetics publication is one of the first major papers describing scientific findings from MVP, according to Dr. Philip Tsao of the VA Palo Alto Health Care System, one of the principal investigators on the study. “The publication highlights the power of these large numbers by identifying several novel genetic factors that affect people’s blood lipid [cholesterol and triglyceride] levels. These findings may lead to new approaches to diagnose people at risk for cardiovascular disease as well as identify candidate therapeutic targets,” he explains.

Each of the three gene mutations seems to convey protections against different diseases. The PDE3B mutation appears to protect against heart disease. A mutation in PCSK9 seems to decrease the risk not only of heart disease, but also abdominal aortic aneurysm—a condition in which the aorta is enlarged, which could lead it to rupture and cause life-threatening bleeding. The ANGPTL4 mutation was linked to lower risk of type 2 diabetes.

The results suggest that drugs mimicking the effects of these mutations could help patients in the future. In fact, a drug already on the market, cilostazol, mimics the benefits of the PDE3B mutation. Cilostazol, mostly prescribed to treat symptoms of blockages in leg arteries, may now be a strong candidate to treat heart disease, according to the researchers.

More research is needed to explore how the findings can be exploited. Large-scale studies will be needed to directly test cilostazol’s effect on heart disease risk. Drugs that mimic the PSCK9 and ANGPTL4 mutations are in development, but large-scale testing will be needed to study their effects.

MVP is a national, voluntary research program funded by VA’s Office of Research and Development. MVP partners with Veterans receiving care in the Veterans Health Administration to study how genes affect health. As of late September 2018, MVP had enrolled more than 700,000 Veterans. It is already one of the world’s largest databases of health and genomic information.

The research was supported by VA, the National Institutes of Health, and Stanford’s Department of Medicine.