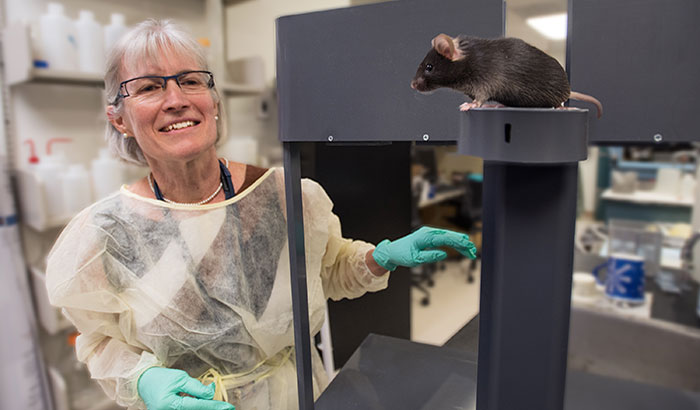 Dr. Deborah Finn observes a mouse in a lab device designed to measure anxious behaviors. Mice with less anxiety spend more time on open, unprotected arms within the apparatus, as shown in the photo. (Photo by Michael Moody)

Binge history leads to more drinking under stress among males, but not females


Researchers with the VA Portland Health Care System and Oregon Health & Sciences University found that a history of binge drinking made male and female mice react differently to traumatic stress. The research may help scientists understand why men and women seem to handle both alcohol and stress differently.

The results were published in the September 2018 issue of the journal Alcohol.

A history of binge drinking is a strong predictor of alcohol dependence, and alcohol use disorder is often characterized by repeated episodes of binge drinking. Excessive drinking is the fourth leading preventable cause of death in the United States, and accounts for nearly 6 percent of deaths globally.

Stress may shift alcohol use from recreational to excessive, according to the researchers.

"Excessive drinking is the fourth leading preventable cause of death in the United States. "

Past research has shown that abnormalities in the hypothalamic-pituitary-adrenal (HPA) axis—interconnected biological systems that control how the body reacts to stress—are present in both PTSD and alcohol use disorder. Differences between the sexes have also been seen in how the HPA axis responds to stress.

So how do these biological differences between the sexes affect the complex relationship between alcohol use and PTSD?

To answer this question, the researchers looked to a mouse study.

The researchers then intermittently exposed the mice to dirty rat bedding to cause stress. Previous research has shown that the odor of predators can produce behavioral and physiological responses in rodents similar to those seen following traumatic stress in humans. An earlier phase of the study showed that the dirty rat bedding increased anxiety-related behavior and increased the levels of corticosterone—a stress hormone—in both male and female mice.

Lead author Dr. Deborah Finn, a research pharmacologist at the VA Portland Health Care System and professor in the department of behavioral neuroscience at OHSU, explains that her team used a device called the “elevated plus maze” to measure anxiety-related behavior in the mice.

Before and after the mice were exposed to the dirty rat bedding, they were offered two bottles to drink from, one with alcohol and one with water. Each bottle was equipped with a “lickometer,” a device that recorded both the amount and frequency of drinking. 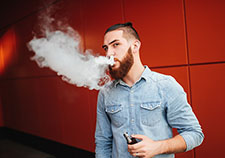 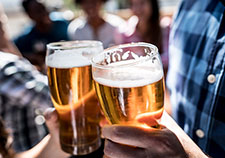 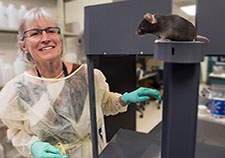 Veterans and the criminal justice system

Male mice that previously had drunk water increased their alcohol licks by 24 percent after four stress periods over 22 days, compared with their baseline drinking prior to the beginning of the stress period. For male mice in the binge drinking group, ethanol licks increased by 65 percent. Drinking behavior after stress—how often the mice drank and how much they drank each time they went to the bottle—increased across time for the male binge group but not the control group.

In the female mice, no difference appeared between the binge-drinking group and the water group. Stress caused female mice to drink more alcohol, but the binge group did not increase their intake more than the control group, as was seen in the males. The female binge mice increased their alcohol licks by 5 percent, while the control group increased by 6 percent.

The researchers found neurochemical and physiological differences between males and females, in addition to the changes in alcohol drinking behavior. When testing blood plasma, they found that predator stress exposure significantly increased corticosterone levels in mice that were consuming alcohol, with higher levels in females than in males. This finding is consistent with evidence for sex differences in HPA axis responsivity to stress. However, the stress-induced increase in corticosterone levels was lower than that observed in the mice that had never consumed alcohol, especially in the male mice. This result suggested to the researchers that a history of alcohol drinking might dampen the stress response to predator odor, particularly in male mice.

The researchers also used a test called a Western blot to measure protein levels in the brain tissue of the mice. They focused on the prefrontal cortex and hippocampus, two brain regions that are important in the stress response. Two proteins involved in regulating the stress response, corticotropin releasing factor receptor 1 (CRF-R1) and glucocorticoid receptor (GR), were significantly increased by traumatic stress exposure and a history of alcohol drinking in the prefrontal cortex and hippocampus of female mice. Similar increases were not observed in the male mice. The clear sex difference in CRF-R1 and GR levels suggested that the HPA axis may respond differently in males and females to repeated traumatic stress and the long-term alcohol drinking.

While the research was conducted using mice, it could have implications for how humans react to both excessive drinking and traumatic stress.

Ample evidence from past research shows that men and women are affected differently both by stress and by alcohol. Lifetime prevalence of PTSD is reported to be twice as high in women as in men, whereas prevalence of alcohol use disorder with PTSD is higher in males than in females.

Men and women also tolerate alcohol differently, past studies show. In general, men seem to have a higher tolerance for alcohol than women. Past research suggests that there may be more complex chemistry involved than just body weight. For example, men may metabolize alcohol faster than women because their bodies produce more of an enzyme that breaks down alcohol in the liver. Women also develop alcohol-related problems such heart disease, liver damage, and brain damage after fewer years of heavy drinking, compared with men.

The researchers plan to use their model to look for biological and molecular mechanisms that could confer sensitivity or resilience to binge drinking and traumatic stress exposure. They emphasize that traumatic stress and binge drinking together have a greater effect than either on its own, and that men and women may need to be treated differently for these conditions. The lab research could eventually help lay the groundwork for new treatment strategies for Veterans with both PTSD and alcohol use disorders.