A new VA study supports prior findings that a moderate amount of alcohol is linked with reduced risk later in life for hospitalization or death. But the study’s lead author doubts that even a small amount of alcohol can benefit one’s health. (Photo for illustrative purposes only. ©iStock Getty Images Plus/vectortatu, OlegEvseev, Panuwat Dangsungnoen)

"People are starting to steer away from the idea that moderate amounts of alcohol are better for your health overall."

A VA study finds that hospitalization or death from any cause was higher in older Veterans who were nondrinkers or “harmful use” drinkers, compared with moderate drinkers. All of the nearly 10,000 Veterans in the study were defined as “high risk” for being hospitalized within one year.

The results appeared in the journal Alcoholism Clinical & Experimental Research in June 2021.

The study’s principal investigator, Dr. Dan Blalock, says one possible explanation for the finding is that healthier patients in the study sample liked to drink in moderate amounts.

But even though the findings support prior literature showing that drinking a moderate amount of alcohol is linked with reduced risk later in life for hospitalization or death, Blalock expresses skepticism that even a small amount of alcohol is beneficial to one’s health. 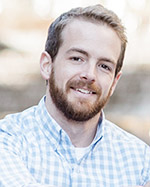 Dr. Dan Blalock is a clinical research psychologist at the Durham VA.

“A lot of people in the medical community are talking about that theory right now,” says Blalock, a clinical research psychologist at the Durham VA Health Care System in North Carolina. “There are hypothesized mechanisms for why a little bit of alcohol would be good for your health, like alcohol actually helps your good cholesterol [HDL] a little bit. That’s one of the mechanisms that’s been proposed, especially for heart health.

“But people are starting to steer away from the idea that moderate amounts of alcohol are better for your health overall,” he adds. “That’s because a lot of work is coming out that any amount of alcohol increases your risk for a lot of different things considered detrimental to your health, from certain cancers to certain cardiac abnormalities. A lot of that research is pretty new, especially regarding cancers. But it’s making people step away from the idea that alcohol has beneficial effects for you on the whole.”

In recent years, studies have challenged the theory that alcohol has health benefits, concluding that no alcohol use is the most universally recommended way to minimize health risks linked to drinking. Most health experts advise people who don’t drink to not start.

In their research, Blalock and his colleagues also reached a surprising conclusion. They found that the rate of hospitalizations or deaths specifically related to heart disease was similar in the four categories of drinking evaluated in the paper. In other words, drinking, even at hazardous levels, didn’t appear to make things worse. But only 184 of the Veterans in the study had hospitalizations that could be attributed to heart disease, so the results might not be valid or might need to be replicated with a larger sample.

“When we started to look at how the numbers broke down, it became clear that our sample [of nearly 10,000 Veterans] was relatively small given the relatively rare event of heart disease hospitalizations at six months past baseline,” says Blalock, who is also an assistant consulting professor at Duke University in North Carolina. “Once you break those 184 patients down into our four categories of alcohol use—nondrinker, moderate, hazardous, and harmful—there weren’t enough data points to confidently conclude anything about the link between alcohol consumption and heart disease hospitalizations. 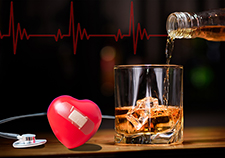 “That is why we have to be very careful with how we discuss these findings and non-findings,” he adds. “We’re not saying that alcohol consumption has no relationship with heart disease hospitalizations. We’re simply saying that our findings did not support an association one way or another, and that additional work is needed in survey samples larger than ours.”

It’s possible, Blalock noted, the high-risk nature of the older adult sample was tied to an increase in other health problems, lowering the importance of heart disease as a risk factor. The average age of the nearly 10,000 Veterans was 67. “These 10,000 Veterans might not be a representative sample,” he says.

In the general population, harmful alcohol use is a risk factor for death due to complications from heart disease, increasing the possibility up to twofold. Plus, heart disease is the most common cause of more than a quarter of drinking-related deaths.

The growing problem of excessive alcohol use in the elderly population, as well as the limited knowledge of ties between alcohol misuse and hospitalization and death in an elderly population, provided the impetus for Blalock’s study. “Drinking may compound the host of additional health problems that often come with aging,” he says. “However, the impact of excessive drinking on the health of older adults is not well understood. To begin to address this evidence gap, my coauthors and I decided to examine the link between self-reported alcohol misuse and acute health care use.”

The researchers gathered data through the Veterans’ electronic health records, which included alcohol use measured via a screening instrument called the Alcohol Use Disorder Identification Test. The three-item test asks about patterns of alcohol consumption over the past year. “It’s a screening instrument, not a diagnostic instrument,” Blalock explains. “But it’s well established at doing a good job measuring whether people are drinking at levels that might cause health or other problems.”

To create a nationally representative sample, the researchers selected the nearly 10,000 Veterans from VA’s 18 VISNs (Veterans Integrated Service Networks). Each Veteran was considered “high risk,” as defined by a one-year risk of hospitalization or death based on VA’s Care Assessment Need (CAN) score.

hospitalization or death is particularly surprising given the increased risk for heart disease and heart disease-related health problems in older adults,” the researchers write. “These findings suggest that the complex association between alcohol and all-cause acute healthcare use found in the broader population is similar in older, high-risk Veteran patients.”

No cause and effect

Because the study design was observational, the researchers were unable to determine cause and effect. “The Veterans were not randomized to the four levels of drinking, so there were many observed and unobserved differences between Veterans in these levels of drinking,” Blalock says. “Randomization is one of the best methods we have to gain insight into whether associations are causal. Thus, we simply observed naturally-occurring associations in this sample of VA patients.”

Another limitation is that the results may not apply outside a sample of older, high-risk, and predominantly male Veterans.

“It’s possible that either the combination of being older and low risk or the combination of being high risk and younger may lead to findings different from ours,” the researchers write. “However, the two classifications of age and risk of hospitalization or death share a high degree of overlap. The low number of women Veterans in the current sample also precluded examination of sex-related hospitalization estimates.”

Currently, Blalock and his colleagues are following up on the study with two different projects. In May, he launched his VA Career Development Award to create a program for Veterans who drink above recommended guidelines and are at risk for heart disease. The program will look to target alcohol use and other health behaviors that contribute to the risk of heart disease, including poor diet, lack of exercise, smoking, and not adhering to prescribed medication. “There is likely to be a large overlap in Veterans who would qualify for this program and Veterans we observed in the current study,” Blalock says.

In October 2021, Blalock and his colleagues Donna Zulman and Matt Maciejewski will begin a VA-funded project to examine the relationship between non-clinical measures that influence clinical outcomes in high-risk VA patients. Such measures, also called social determinants of health, include food insecurity, transportation issues, and a lack of social support.

Meanwhile, Blalock hopes the findings in his June 2021 study will contribute to a broad awareness for Veterans and their health care providers that alcohol use is an important factor to consider in health care at any stage.

“In turn, this broader awareness of the role of alcohol use can lead to earlier intervention and mitigate unnecessary health risks and hospitalizations,” he says, “especially for Veterans with extensive health needs whose alcohol intake may be overlooked.”