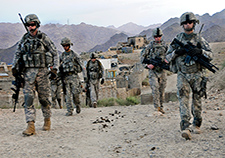 Mild traumatic brain injury (mTBI), by itself, may not lead to mental health problems such as PTSD or mood or anxiety disorders. That is the key finding from a VA study of 107 Iraq and Afghanistan Veterans.

The study was relatively small, but unlike many other studies on the topic, it relied on structured interviews—rather than survey or screening data, or retrospective chart reviews—to establish psychiatric diagnoses and verify past TBIs.

TBI affects some 20 percent of U.S troops wounded in Iraq or Afghanistan. The condition co-occurs very frequently with PTSD and other mental health disorders, but experts have been unsure whether TBI is a cause of those problems. VA researchers and others have done many studies to try and tease out the links—ranging from brain-scan studies to database research—but findings so far have been mixed.

Among the 107 Veterans in the new study, all interviewed within two years of their last blast exposure, the rates of PTSD and other mental health conditions were fairly high. More than half—56 percent—had at least one mental health diagnosis based on the interview: For example, 27 percent had PTSD, 18 percent had agoraphobia, and 16 percent had depression. These findings were in line with other, larger studies on returning Veterans.

But the researchers found, surprisingly, that the number of blast exposures reported by Veterans had no effect on the rates of mood or anxiety diagnoses or PTSD. Likewise, it made no difference whether or not the Veterans had incurred an mTBI as the result of a blast, or suffered amnesia when the blast occurred. Across all these categories, rates of mental health diagnoses were roughly the same.

The study included only Veterans who had reported being exposed to at least one blast while deployed. Remarkably, nearly a third of the group reported being exposed to more than five blasts during their combat tours. Most of the participants—91 percent—had at least one mTBI as a result of a blast. Some had also experienced non-blast head injuries during or before their deployments.

On the whole, the take-home message of the study is a hopeful one, says lead author Dr. William Walker.

"It's encouraging that there is no evidence of persistent brain damage, at least from a mental health standpoint," notes Walker, a physical medicine and rehabilitation specialist. He is site director of the Richmond (Va.) Defense and Veterans Brain Injury Center, based at the McGuire VA Medical Center, and a professor at Virginia Commonwealth University.

Walker and his team stress that more research is needed to sort out the complex interplay between blast exposures, TBI, and mental health problems. He points out, also, that "so far research is very mixed on evidence for biological findings [such as white matter damage in the brain] or impaired cognitive performance" among blast-exposed Veterans. "In a nutshell," he says, "we know very little, which is why it's an intensive area of research."

Findings may differ for higher-grade concussions

One key nuance in the study: While no link emerged between mental health disorders and blast exposures or mTBIs on the whole, there was such a link when the researchers took into account post-concussion symptom severity. "Our research indicates higher-grade concussions may be related to persisting impairments," possibly including mental health diagnoses, says Walker. A minority of those with mTBI experience lingering symptoms, known collectively as post-concussion syndrome. These symptoms, which usually resolve after a few months but in some cases persist for years, are wide-ranging. Headaches, dizziness, sleep trouble, noise sensitivity, vision problems, fatigue, poor concentration, memory lapses, and low mood or irritability are among the more common ones.

Such symptoms could improve, get worse, or stay the same over time. All the Veterans in the study were well within two years of their blast exposures, and most were still within a year of their last blast, or their worst one. As researchers gather data from longer-term studies now underway, they should learn more about the long-term course of TBI and its relationship to mental health.

The results of the new study do jibe with those from a 2014 review study by a VA team. That effort looked at 31 past studies on Iraq and Afghanistan Veterans. It found that while cognitive, physical, and mental health symptoms were common in those with mTBI, the rates were not significantly higher than among those Veterans without a TBI history. The authors, though, conceded that the strength of their evidence was "very low," due to the methodological limitations of the studies they examined. They pointed out, also, that individual Veterans could experience TBI complications not reflected in the overall patterns they noted in the study.

For now, Walker emphasizes that "in general, we should encourage Veterans to seek medical assessment and care for mood and emotional problems regardless of whether they had a TBI."

To learn more about VA research on TBI, visit www.research.va.gov/topics/tbi.cfm.