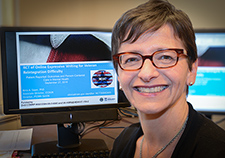 In a study of nearly 1,300 returning Veterans reporting reintegration problems, those who completed online expressive-writing sessions showed more improvements than peers who had not written at all or who had engaged only in factual writing.

The effects of the intervention, which involved four 20-minute writing sessions, were small. But the researchers say it nonetheless could be a worthwhile step in helping returning Veterans, given its low cost and high accessibility. They say it could be used as a stand-alone therapy or as an add-on to formal treatment.

The study appears in the October 2015 issue of the Journal of Traumatic Stress.

"Online expressive writing, a simple, resource-efficient intervention that can be implemented online without clinician involvement, may be a promising strategy for improving symptoms and functioning among combat Veterans who experience reintegration difficulty," write the authors.

Study leader Dr. Nina Sayer points out that the low-tech activity is easily accessed by Veterans from all backgrounds.

"It has the potential help a large number of people, even if the effect is small," says Sayer. "Because of this reach to a wide population of Veterans, it could make an important difference."

Sayer is with the Center for Chronic Disease Outcomes Research, based at the Minneapolis VA Healthcare System, and with the departments of medicine, psychiatry, and psychology at the University of Minnesota. She collaborated with VA and university researchers from several other sites. VA and the Department of Defense funded the work.

The male and female Iraq and Afghanistan Veterans in the study, recruited through VA and Defense sources, were randomized to either expressive writing or one of two "control" activities. One control group was asked to write factually about the information needs of new Veterans. The other group was not given any writing assignments.

Those in the two writing groups visited a study website where they received instructions and wrote for at least 20 minutes, on up to four separate days within a 10-day window. For the expressive writing group, the topic was their transition from soldier to civilian. They were asked to "write about their deepest thoughts and feelings around the topic," says Sayer, and to not worry about grammar and spelling.

Comparing the benefits across study groups

Compared with no writing at all, expressive writing was better at reducing PTSD symptoms. It was also better than no writing for reducing anger, distress, reintegration problems, and physical complaints, and for improving social support. In terms of improving overall life satisfaction, no difference was seen between the study arms.

The authors note there were fewer differences than expected between the expressive- and factual-writing groups. They say it could be that the study participants assigned to write factually about Veterans' needs did in fact derive some emotional benefit from the exercise, even though they weren't doing "expressive writing" per se. By the same token, there may have been a certain placebo effect to both types of writing.

Past studies on expressive writing have shown that it generally does have mild therapeutic value for people with various health conditions and adjustment problems. This was the first time it was studied specifically as a way to help Veterans cope with reintegration.

Some of the study volunteers had a PTSD diagnosis, and others did not, but all had reported at least "a little" difficulty adjusting to civilian life. Veterans with severe depression were excluded, as other research has shown that people in this category do not benefit from expressive writing.

Intervention may help with range of difficulties

Sayer says the findings suggest that Veterans with a range of mental health or emotional difficulties—whether or not they have any formal diagnosis, and whether or not they are getting treatment—could benefit from expressive writing.

She adds that some Veterans may think about starting psychotherapy as a result of their writing, and some may bring issues from their writing into their therapy sessions.

"It could be that for some people, the experience of writing about their reintegration issues may lead them to think about trying therapy, when they hadn't thought about doing so before."

Sayer's team did not share the Veterans' writing samples with anyone, but they did review them for safety concerns, such as violent or suicidal thoughts. When appropriate, the team reached out directly to Veterans to try to connect them with the help they needed, or referred the writing samples to a clinician outside the research team for possible follow-up with the Veteran. The writing website itself also offered referral information.