Scientists have tried to distinguish between mTBI and PTSD in hopes of improving treatment options for Veterans. But many symptom-based studies have been inconclusive because the chronic effects of the two conditions are so similar. If someone is rating high on an mTBI scale, for example, that person may also rate high for PTSD symptoms.

A recent VA study in the International Journal of Psychophysiology points to a possible breakthrough in differentiating between the two disorders. The researchers used electroencephalogram, or EEG, a test that measures electrical activity in the brain. The size and direction of the brain waves can signal abnormalities.

Analyzing a large set of EEGs given to military personnel from the wars in Iraq and Afghanistan, the researchers saw patterns of activity at different locations on the scalp for mTBI and PTSD. They saw brain waves moving slowly in opposite directions, likely coming from separate places in the brain.

The researchers emphasize that these effects don't pinpoint a region in the brain where the disorders differ. Rather, they show a pattern that distinguishes the disorders when the EEG results are averaged among a large group.

"We want to use the EEG to differentiate the problems, but also to predict recovery and be able to measure how people are doing in a more biological way than just measuring symptoms, although those are still relevant."

Hard to tell exactly where signals emanate from

"When you're looking at an EEG, you can't easily tell where in the brain signals associated with TBI and PTSD are coming from," says Dr. Laura Manning Franke, the study's lead researcher. "You get kind of a coarse measure—left, right, anterior, posterior. We had a different distribution, which suggests that different parts of the brain are involved. In order to determine what patterns are tracking their TBI and PTSD, you need an average to do that." 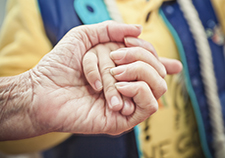 The differences in the levels of the waves may explain some of the symptoms of the two disorders, suggesting a decline in responsiveness for someone with mTBI, for example, and more anxiety for someone with PTSD.

Manning Franke, a research psychologist at the Hunter Holmes McGuire VA Medical Center in Richmond, Virginia, notes that more low-frequency power has also been linked to cognitive disorders such as Alzheimer's disease, and less low-frequency power to problems such as drug addiction.

Manning Franke says her group's new study is one of few published papers that have found differences between mTBI and PTSD in a measured brain activity.

Spotting distinct patterns of mTBI and PTSD in separate parts of the brain is key for two reasons, she says. For one, the possibility these conditions can be confused with each other is reduced. That can help improve diagnosis and treatment.

Second, the patterns show that electrical activity appears to be affected long after combat-related mTBI, suggesting long-term changes in neural communication, the signaling between cells in the nervous system.

"That could help, in part, explain the reason for persistent problems," Manning Franke says.

The study included 147 active-duty service members or Veterans who had been exposed to blasts in Iraq and Afghanistan. Of those, 115 had mTBI, which accounts for nearly 80 percent of all traumatic brain injuries. Forty of the participants had PTSD, and 35 had both conditions.

The total sample was much larger than that tested in a previous EEG-based study by researchers in the Minneapolis VA Health Care System. That study identified changes related to combat blast exposure and PTSD using a method that differed from the one used by Manning Franke. The Minneapolis research was "good because it also showed effects in similar regions of the EEG spectrum," she says. "So that suggests there is something we're both seeing going on in low-frequency EEG that's different between the two conditions."

Despite the progress, Manning Franke and her team believe more work is needed to better explain the differences in the patterns of both conditions in the brain's electrical activity. She says it's challenging to definitively link brain activity seen in the present to an injury from the past.

"As time passes, a person is exposed to many other events that also lead to changes in the brain, so it is hard to attribute to a single cause," she says. "Very large studies help to filter out competing potential causes, but these are expensive and hard to execute. You also have to be looking at the right biological process with the right test. Should we look at inflammation markers, axonal integrity, EEG power, conduction time? All of those have many variants as well. Last, it takes time to observe chronic, longer-term effects."

Meanwhile, Manning Franke hopes her research will play a role in helping medical professionals better diagnose someone's condition through an individual EEG—whether that person has PTSD, a brain injury or a combination of the two.

"That's the holy grail," she says. "We want to use the EEG to differentiate the problems, but also to predict recovery and be able to measure how people are doing in a more biological way than just measuring symptoms, although those are still relevant. But [symptoms] are also problematic because they're influenced by so many things that aren't the disease that we're interested in."