Suicide is one of the leading causes of death in the United States, with at least 30,000 people taking their lives every year, including about 1,500 in inpatient hospital units.

An alarming number of Veterans are among those committing suicide, some in inpatient hospital settings. In an effort to decrease such tragedies, VA in 2007 launched the Mental Health Environment of Care Checklist. A multidisciplinary group of VA employees developed the program to review inpatient mental health units and eliminate hazards that could increase the chances of patient suicide or self-harm. The group focused on architectural changes, with analyses suggesting that structural hazards such as anchor points like a hook on the wall or a ceiling vent were linked to most attempted or completed suicides.

Following implementation of the program, each VA hospital with a psychiatric unit treating actively suicidal patients began using a checklist to report the potential hazards that could allow one to take his or her life. The checklist asks questions such as whether beds, walls, and ceiling vents are free of anchor points for hanging. Other potential hazards include non-shatterproof glass and non-tamper-resistant electrical outlets.

VA researchers have undertaken studies to evaluate the effectiveness of the checklist. The most recent study, published online Nov. 15, 2016, in Psychiatric Services, finds that the program led to a sharp decline in suicides at VA inpatient mental health units from 2000 to 2015. Plus, there was a sustained reduction in inpatient suicides during the last seven years of that period, with none occurring in each of the last three years.

"The checklist [involves] hardwiring of changes into the architecture of mental health units."

"First, it appears that the Mental Health Environment of Care Checklist has had a substantial and persistent reduction in inpatient suicide deaths," he says. "Second, these findings suggest that architectural and environmental changes may result in more lasting effects in contrast to other improvement strategies for reducing suicides in hospital units."

Other strategies for preventing suicides in hospitals include training staff better, performing more frequent checks of patients, and implementing a non-punitive culture that rewards incident-reporting and supports its continued improvement. 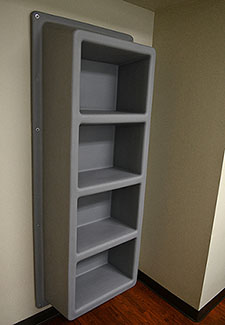 Shelving that has no sharp edges and is bolted to the walls avoids the potential suicide and self-harm risks associated with standard shelves or cabinets. (Photo by Jeff Bowen)

Shelving that has no sharp edges and is bolted to the walls avoids the potential suicide and self-harm risks associated with standard shelves or cabinets. (Photo by Jeff Bowen)


Watts, a psychiatrist at the VA Medical Center in White River Junction, Vermont, and the study's other three researchers are with the VA National Center for Patient Safety, based in Ann Arbor, Michigan. That program was created in 1999 to lead the development of formal patient safety activities across the VA health system. One of its first actions was to institute a root cause analysis of adverse events such as inpatient suicide. Root cause analysis, used widely in industry, is a systematic approach that helps organizations identify and address the underlying causes of problems, instead of just "putting out fires" when they occur.

In a review of the National Center for Patient Safety's root cause analysis database, the researchers learned of 29 completed suicides in VA mental health units from 2000 to 2015 (24 before implementation of the checklist and five after). The rate of suicide in mental health units before the program kicked off was 4.2 per 100,000 admissions. It dropped to 0.74 suicides per 100,000 admissions—an 82 percent reduction.

The new study is an extension of a 2012 report led by Watts that linked the checklist to a drop in the inpatient suicide rate at VHA mental health units. Both studies focused on programs that took a different approach from VA initiatives that entailed educating and training mental health staff to help curtail suicides. 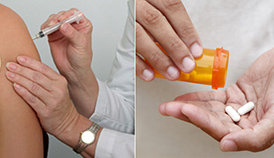 Structural changes, according to Watts, reduce the burden on hospital staff to prevent suicides.

"The checklist and resulting environmental changes involve hardwiring of changes into the architecture of mental health units," he says. "Thus, staff don't have to remember to do something. The unit is just designed that way."

Another implication of the finding, Watts says, is that there may be other effective approaches that, like structural changes, create no added burden on staff. One such approach would be the increased use of automated technologies to help provide care for patients with mental illness.

"Technologies tend to be better at performing the same task repeatedly," he says. "This could have implications in the mental care system for Veterans and non-Veterans."

Some inpatient suicides may have gone unreported

Non-VA hospitals, Watts says, have taken notice of his research on the Mental Health Environment of Care Checklist in hopes of reducing inpatient suicide rates. He says he and his colleagues at the National Center for Patient Safety are working with the health agency in the Canadian province of Alberta as it applies the checklist in its hospitals.

"We receive many inquiries about the Mental Health Environment of Care Checklist from non-VA health systems," he says. "It is my understanding that many elect to use the program for their inpatient mental health units."

His 2016 study, however, is not without its limitations. It is possible that some inpatient suicides at VA facilities may have gone unreported, which could potentially change the results of the before and after comparisons, along with the fact that researchers tracked the effects of the checklist only for seven years.

Furthermore, Watts says, the impact of the program could possibly drop in the coming years.

"Future staff could stop using it and reverse the changes," he says. "Staff members change and forget what was done and why it is done. Then one day a patient or nurse complains that they don't have a place to hang their robe. Hospital workers try to accommodate this suggestion and put a hook on the wall. Later, that hook is used as an anchor point for a suicide attempt. We hope that won't happen, but we continue to monitor in case it does."

"Our goal is to have no inpatient suicides in the VA," he adds. "Our hope is that a continued focus on this approach will result in a continued reduction in suicide."