ORD Home » Currents  » Down on the farm 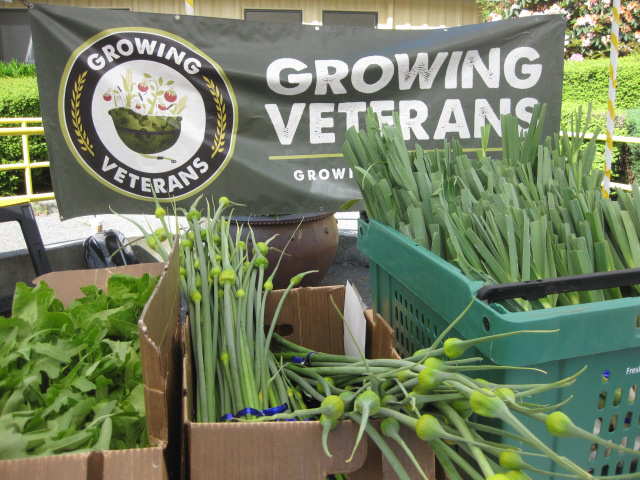 Lettuce, onion scapes, and leeks were among the produce that Growing Veterans had for sale recently at the Seattle VA Farmer's Market. (Photo courtesy of Christopher Brown)

Down on the farm 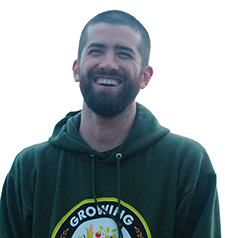 Marine Corps Veteran Christopher Brown is president and co-founder of Growing Veterans. The organization encourages Vets to volunteer on its farms in Washington state. (Photo courtesy of Christopher Brown)

Marine Corps Veteran Christopher Brown is president and co-founder of Growing Veterans. The organization encourages Vets to volunteer on its farms in Washington state. (Photo courtesy of Christopher Brown)

To Christopher Brown, a PTSD counselor at the Bellingham Vet Center in Washington state, there are two main degrees of suicide ideation—or thoughts of taking one’s own life.

On the subtle end, he says, are “fleeting thoughts where maybe things will be better if I just don’t wake up in the morning.” To a more extreme degree, “There’s a plan in place, a means, and I’m going to [die by suicide] if I don’t go somewhere to keep myself safe,” he says.

Brown speaks from personal experience. He’s a Marine Corps Veteran who has battled PTSD after doing two tours in Iraq and one in Afghanistan. During a 2007 enemy attack on his base in Al Anbar Province in Iraq, he suffered a traumatic brain injury due to a truck explosion and a bullet wound to the leg.

“I have been on that really subtle end where things just felt so low and so hopeless,” he says. “I remember saying to myself that if this is how people feel for an extended period of time, then I kind of understand why they would feel motivated to end their life. Fortunately, I had a really solid support system in place, and I was able to get out of that pretty quickly.

“That experience has helped me be more empathetic and compassionate to the Vets I work with when I’m having those difficult conversations with them,” he adds. “I know where they’re at, and I kind of know what they need to hear to help them see the light at the end of the tunnel.”

In addition to his work at VA, Brown is president and co-founder of an organization that helps Veterans see that light: Growing Veterans. Its goal is to end the isolation that can lead to Veteran homelessness, divorce, depression, or possibly suicide. 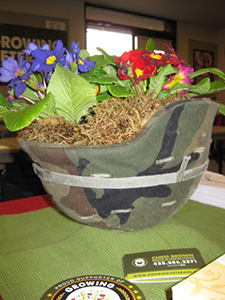 A flower arrangement in a military helmet, made to resemble the logo of Growing Veterans. (Photo courtesy of Christopher Brown)

A flower arrangement in a military helmet, made to resemble the logo of Growing Veterans. (Photo courtesy of Christopher Brown)

A 'therapeutic value’ for Veterans

Growing Veterans encourages Vets to work on its farms in Washington state between Puget Sound and the Cascade Mountains. There, they grow food and plants to support local and sustainable agricultural efforts. At the same time, they can congregate, vent among each other about challenges in re-acclimating themselves to society, and build camaraderie and a peer support system. While working in the fields, they could be discussing feelings of loneliness or suicidal thoughts.

The organization also creates opportunities for professional development. Vets considering agriculture as a career are taught valuable farming skills and are connected with resources that allow them to start farming.

The volunteers in Growing Veterans are mostly men who deployed to Iraq and Afghanistan. There are also women, plus Vets from other eras. Non-Veterans can volunteer, too. In 2016, the organization hosted 350 volunteers, grew more than 45,000 pounds of food at three farm sites in Washington (Mount Vernon, Lynden, Auburn), and donated more than 11,000 pounds of food to food banks and families.

In Brown’s view, Growing Veterans has a “therapeutic value” for Veterans who are struggling emotionally. It’s more of a suicide prevention, not a suicide intervention, initiative, he says.

“One of the biggest precursors to suicide is social isolation, the feeling that there’s no hope and no one out there that can relate to what you’re going through,” Brown says. “By spending time on the farm, we can help prevent that isolation from occurring. Vets are working alongside each other weeding a row in the field and are able to have these difficult conversations without it feeling very difficult. In that regard, it helps prevent suicide.”

Brown knows of three Vets who volunteered for Growing Veterans in a “last-ditch effort to feel something, feel some hope before ending their lives,” he says. “They reported to us that coming out to the farm is what saved them and gave them that hope.”

One of them served in the Army in Afghanistan. He became interested in a specific type of farming, took workshops, and came on as a program coordinator with Growing Veterans. He recently bought a home and has a bright outlook on his future, Brown says, noting that “he’s kind of our case model study of what coming out to the farm can potentially do for somebody.”

Growing Veterans is one of many reintegration initiatives that aim to prevent isolation, depression, and suicide among former service members. VA research shows that the suicide risk among Veterans is about 22 percent higher than among other U.S. adults. VA Secretary Dr. David Shulkin has made suicide prevention his top clinical priority. 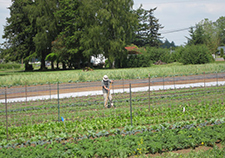 A VA study published in Physical Medicine and Rehabilitation in August 2017 illustrates the potential of Growing Veterans to improve the reintegration process for rural Vets. The researchers found that those who participated in Growing Veterans reported improvements in physical and mental health factors that impact Veteran reintegration.

The Veterans, who harvested food that was sold at a farmer’s market, told of improvements in sleep, nutrition, and exercise, as well as a sense of purpose and mission. They also reported declines in anxiety, pain, depression, and medication and substance abuse.

The study’s lead researcher, Dr. Karen Besterman-Dahan, is a medical anthropologist at the Center of Innovation in Disability and Rehabilitation Research at the James A. Haley Veterans’ Hospital in Tampa, Florida. She says little research has been done on the subject of Veteran reintegration via agricultural work.

She and her team weren’t surprised that Growing Veterans made such as positive impact. But they were amazed at how well-received the program was, she says. They reached their conclusions through surveys, interviews, and site visits.

"By spending time on the farm, we can help prevent that isolation from occurring."

“It’s great so see the survey results, but it’s even more impressive when you’re sitting and talking with people and when you’re there watching it,” Besterman-Dahan says. “During our site visits, it was quite something to hear accounts from people who said how joining Growing Veterans really was a life-changing event for them. This was validated much later on when we were doing our Farmer Veteran Coalition study. We heard this time and again, how farming saved their life, or how joining these organizations saved their life.”

Her study on the Farmer Veteran Coalition, which helps Vets advance their careers in agriculture by giving them access to funding and other support services, is yet to be published.

Nearly 70 people participated in the Growing Veterans study, including 43 former service members, most of whom were post-9-11 Vets, and 24 non-Veterans. Nearly 75 percent of the participants reported that the program provided opportunities to use or improve business and community networking skills. More than half said working with non-Veterans in an agricultural setting changed the way they communicate with people who have no military experience.

Plus, many of the Vets viewed their work as an extension of the spirit of service they felt in the military.

The non-Veterans acknowledged that working alongside former service members deepened their understanding of the Veteran experience and identity. It also helped to deflate stereotypes of combat Vets. “We got a lot of good information from [non-Veterans] who said, 'I’ve never been around Veterans before, but I have notions of them just going off because of PTSD and killing all these people,’ ” Besterman-Dahan says. “ 'But I found out they’re just like me. We had a common task of harvesting food for our families and others in the community.’ ”

The Farmer Veteran Coalition estimates there are more than 250 agricultural reintegration initiatives in the U.S. To ensure that Veteran needs are best served through these programs and others, Besterman-Dahan and her colleagues recommended VA take an approach that features the following elements:

“This case study presents only one model of a Veteran agricultural program,” the researchers write. “Since passage of the 2014 Farm Bill, many Veteran-oriented agricultural programs have developed with a variety of models, missions, goals, populations, and technology used. Research is needed to determine best practices and evaluate the impact of contextual issues such as geographic location, type of initiative, and target participant.”

Parts of the 2014 Farm Bill, also known as the Agricultural Act of 2014, created vocational opportunities for Veterans to succeed as farmers and ranchers. For one, the legislation helps Veterans access government programs to obtain financial aid and training.

Growing Veterans is not a vocational initiative per se. But Christopher Brown wants to see more organizations of this type, largely because of their ability to help Veterans with PTSD and other mental health conditions.

After he was diagnosed with PTSD in 2008, his counselor encouraged him to grow plants as a way to reconnect with his environment. In his undergraduate work at Western Washington University, he studied human services with a focus on Veterans’ concerns. “One day it just clicked: Why don’t we combine this agricultural work with Veterans’ issues and use the farm as a catalyst for Veterans to reintegrate,” he says.

With that in mind, the Purple Heart recipient co-founded Growing Veterans in 2012.

Among other benefits of the program, it can be a steppingstone for professional advancement, says Brown.

But the impact goes yet deeper, as Brown sees it.

“Beyond preventing suicide, we wanted to be part of the movement of Veterans getting into agriculture. We wanted to be able to serve as an example of a healthier, resilient lifestyle: eating good food, getting outdoor physical activity. All of that lends itself to a more manageable situation if you’re dealing with PTSD or any of the more common ailments that are facing combat Veterans.”