Study finds gaps in VA care for hepatitis B 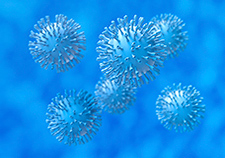 A study of national VA care for patients infected with the hepatitis B virus found significant gaps in testing and follow-up care. The results, published online in the journal Hepatology on Nov. 11, 2015, are similar to those from studies of non-VA care for those with the virus.

Hepatitis B (HBV) is a contagious liver condition that can range from a severe acute illness lasting a few weeks to a slow-progressing but serious lifelong ailment. It shares symptoms and some risk factors with hepatitis C, which is more common in the U.S. Most acute cases of HBV clear up within a few months, with no lasting effects. But about 1 in 10 adults develops a chronic infection, and 1 in 5 of those patients might develop liver failure, cirrhosis, or liver cancer. The infection is tied to as many as 4,000 deaths each year in the U.S.

For the study, a team at the Corporal Michael J. Crescenz VA Medical Center in Philadelphia checked the records of more than 21,400 Veterans who had screened positive for HBV between 1999 and 2013. The screen looks for the HBV "surface antigen." The positive results were pulled from the records of about 2.5 million VA patients overall who had been screened.

The initial positive screens should have been followed by other blood tests that confirm the presence of the virus and gauge how active it is. But that happened less than half the time, according to the study, led by Drs. David Kaplan and Marina Serper, both gastroenterologists with VA and the University of Pennsylvania.

The most common confirmatory test looks for hepatitis B e-antigen, a protein secreted by HBV-infected cells. Just under 50 percent of patients received the test. Another common follow-up test, this one designed to detect viral DNA, was used in only 44 percent of those who had screened positive.

The great majority of those who screened positive did get a follow-up test of liver function: 97 percent had the recommended ALT test, which checks for abnormally high levels of a liver enzyme called alanine aminotransferase. High scores indicate a more active and dangerous virus. Doctors use the test to help determine who should get treatment.

Those patients showing signs of liver damage often didn't get the right follow-up care, however. Of those with elevated ALT results, only a quarter of those in general care received antiviral therapy. The odds were twice as good for those being followed by a gastroenterologist or other HBV specialist, with about half of those Veterans receiving the drugs.

Among those with cirrhosis, a HBV complication that scars the liver, only about 7 in 10 received at least one liver imaging test to screen for liver cancer. Both antiviral treatment and liver imaging were linked to better clinical outcomes and lower death rates in the study.

According to Serper, "This shows that treatment with medications and obtaining liver imaging when appropriate can improve patient outcomes."

Serper and Kaplan initially presented their data at the 2014 meeting of the American Association for the Study of Liver Diseases. In an interview with U.S. Medicine about the findings, Kaplan said, "While other chronic viral infections, such as hepatitis C and HIV, have received tremendous educational efforts, hepatitis B has received far less attention, particularly outside communities with high numbers of immigrants from endemic regions." HBV rates run higher in Asian communities in the U.S.

The authors point out that their new study is one of the largest yet of HBV care in any setting. Moreover, the focus on VA patients adds important new insights, as much of the existing HBV literature focuses on Asian populations and those who acquired the virus from their mother, either in the womb or as an infant.

Although the study showed that only 1 percent of VA patients who were screened for HBV had the virus, that rate is about four times that found in the general population, the researchers say. Among the top risk factors for HBV are unsafe sex, injection drug use, and exposure to infected blood.

Based on their results, the researchers are calling for "significant provider education and improvement in clinical processes" to boost adherence to testing and treatment guidelines. They say such measures are needed not only in VA but across the board in U.S. medical care.