Expanding the focus on women Veterans 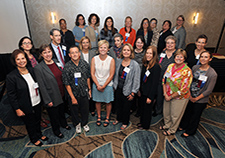 These investigators were among the participants at the 2014 VA Women Veterans Health Services Research Conference. (Photo by Robert Turtil)

These investigators were among the participants at the 2014 VA Women Veterans Health Services Research Conference. (Photo by Robert Turtil)

Nowadays, women make up more than 15 percent of the U.S. military, and at least 1 in 5 new recruits is a woman.

The trend, of course, translates into Veteran statistics. Women now account for more than 9 percent of the 21.6 million Veterans in the U.S, and nearly 7 percent of VA health care users.

In response, VA researchers have been working in recent years to include more women in VA studies and to sharpen the focus on their health needs. One milestone was the creation in 2010 of the Women's Health Research Network. The network, funded by VA Health Services Research and Development, has two parts:

The PBRN was the topic of an article in the September-October 2015 Journal of the American Board of Family Medicine (JABFM). The authors discuss lessons learned from the first study conducted through the PBRN. The study, launched in 2012 and published earlier this year, explored women Veterans' preferences for mental health care. It also sought to refine PBRN operations.

VA Research Currents interviewed three of the authors on the inaugural study and the recent JABFM article, all of them among the leaders in VA women's health research, to learn more about the progress of the PBRN and its impact on women Veterans.

VA Research Currents: How many studies been completed through the PBRN, aside from the inaugural project gauging women's preferences for mental health care?

SF: The saying goes, "If you build it, they will come." When Dr. Yano and I first started the PBRN, we didn't know whether that would prove to be true. So you can imagine our delight that so many investigators have approached us about using the PBRN! We have already had more than 30 funded research studies or program evaluations or quality-improvement projects in the PBRN, and we continue to be approached about new studies. 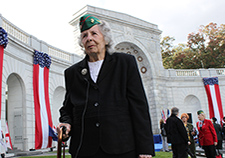 An attendee at the 2012 15th anniversary commemoration event at the Women in Military Service to American Memorial in Washington, D.C. (VA photo)

An attendee at the 2012 15th anniversary commemoration event at the Women in Military Service to American Memorial in Washington, D.C. (VA photo)

Could you provide a few examples of the studies now being conducted?

SF: One of our current studies is led by Dr. Kristin Mattocks at the VA Central Western Massachusetts. Her team is eliciting the perspectives of pregnant women regarding their experiences with maternity care coordination in VA. To achieve a good representation of women from diverse racial and ethnic backgrounds and to recruit enough women, that study is using 13 PBRN sites. Another major initiative that has just recently launched is the EMPOWER QUERI [Quality Enhancement Research Initiative], led by Dr. Alison Hamilton, which will be using multiple PBRN sites. Yet another hallmark suite of studies currently using the PBRN is the Women's Health CREATE, led by Dr. Yano.

Dr. Yano, could you tell us more about that effort, and how it's been helped by the PBRN?

EY: The Women's Health CREATE is a collection of five studies that together are working to accelerate implementation of comprehensive care for women Veterans. These five studies are working with a large number of PBRN sites. I can say that having a PBRN site lead "on the ground" who can help with local logistics and provide warm handoffs to local leadership or providers is huge.

One of the CREATE studies is also working directly with local quality-improvement teams. The PBRN site leads were either the right people to begin with or got us to the right people within days, and then helped us get to the right leaders quickly and easily. This saved us so much time and headache!

For the site leads who are also clinicians, many of them are also directly involved in the intervention, so we are able to really engage and support them in making local evidence-based quality-improvement changes to tailor PACT [Patient-Aligned Care Team, VA's primary care model] to meet women Veterans' needs. It has been so gratifying to work in these partnerships with site leads! 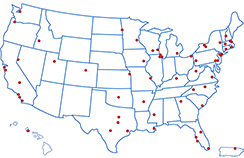 How many sites are currently taking part in the PBRN?

SF: This summer we expanded from 37 sites to 60 sites nationally. These sites span the country. Some are at big hospitals in major metropolitan areas, whereas others are serving women in remote rural communities. We have an amazing and dedicated group of PBRN site leads who represent diverse clinical and research backgrounds. A number of them are Veterans themselves. The PBRN now represents 200,000 women Veterans nationally, which is more than half of the women Veterans who use VHA services.

What have you learned about women Veterans' preferences for mental health care?

RK: One of the most robust findings in the inaugural PBRN study was that women with strong preferences for designated mental health services for women also preferred to receive those services within their primary care setting. These included services that focused on mood, PTSD, and coping with chronic health conditions. One of the newly established QUERI programs, the EMPOWER QUERI, will build on what this study has learned, and on what the Women's Health Research Network has learned about engaging women Veterans, to derive effective strategies for implementing gender-tailored services for these conditions into VA primary care. And of course, the PBRN will provide important infrastructure for this program.

How is VA's Central Institutional Review Board (IRB) important to the PBRN?

SF: The Central IRB is a very helpful innovation for those of us who are involved in multisite research. Because we have a Central IRB, the principal investigator can complete an overarching protocol describing how participants will be protected in the study, and then each site can just adapt templated paperwork and consent forms for their local site. This works better than having a large number of separate IRBs, each with its own forms and regulations. It certainly streamlines processes for us, especially when a study has a lot of sites. 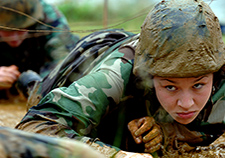 A Naval Academy midshipman crawls through the mud during "Sea Trials" at the U.S. Naval Academy in 2006. Women now account for more than 9 percent of U.S. Veterans and nearly 7 percent of VA health care users. (Photo by Petty Officer James Pinsky/USN)

A Naval Academy midshipman crawls through the mud during "Sea Trials" at the U.S. Naval Academy in 2006. Women now account for more than 9 percent of U.S. Veterans and nearly 7 percent of VA health care users. (Photo by Petty Officer James Pinsky/USN)

In your article, you talk a lot about integrating seamlessly with the clinical side. Why is that so important?

SF: At the heart of the PBRN are the strong clinician-researcher collaborations at the local level, and the cross-site partnership at the national level. The idea of PBRNs is that researchers don't "helicopter in" to the clinic setting, recruit patients, and then leave. Instead, we are committed to building long-term relationships and finding opportunities for mutual benefit.

For example, clinicians have contributed to various phases of the research process for a number of projects—from elements of the design or methods, to interpretation of findings. That is expected to result in research findings that can be more readily applied at the bedside. Through our national network we can also get results back to clinicians more easily, to help reduce the risk of delay in putting research findings into practice.

With regard to effectively recruiting and enrolling women Veterans, the JABFM article mentions that some participants are intimidated by HIPAA language, and you offer recommendations to address that. Could you talk a bit about that?

RK: The research information we present to any Veteran must be clear, concise, and accessible. Required language may vary depending on the level of risk and other characteristics of the study, but we certainly found it helpful to take steps such as assessing the reading level of any wording developed by the study team and including a plain-language study information sheet. I really also have to give credit to our dedicated and skilled site coordinators, who did not see these forms as perfunctory. They took the time to talk with women. They made sure that the women understood the content and that their concerns were addressed.

Are there any other insights you'd like to share concerning connecting with women Veterans and promoting their participation in research?

EY: For one of our studies, we worked with PBRN site leads to identify the best local person to send out endorsement letters for a patient survey. It had to be someone that women Veterans would know and that they could talk to about the survey or study if they wanted to. So every site's contacts with women Veterans is customized.

We also have a Women Veterans Council in which we talk about what in our study findings is important to them. In addition, we briefed VA's Advisory Committee on Women Veterans, and it just so happened that a couple of members had been research participants, and they reminded us how critical it was to always circle back to women Veterans who have participated and share study results. So we are doing that on every level now.

Meanwhile, another of the things we are very excited about is that Dr. Alison Hamilton is leading a new component of our Women's Health Research Network grant that focuses specifically on multi-level engagement. By that we mean engagement of women Veterans, clinicians, VA leaders, and researchers. She is conducting qualitative interviews with all these groups, and we expect to learn a lot about what does and does not inspire people to get involved in research about women Veterans, and what all of us in the research community can do better.

RK: We would also really like to thank the women Veterans for taking the time to share their experiences and preferences with us, so women's voices are heard in the design and development of VA services.