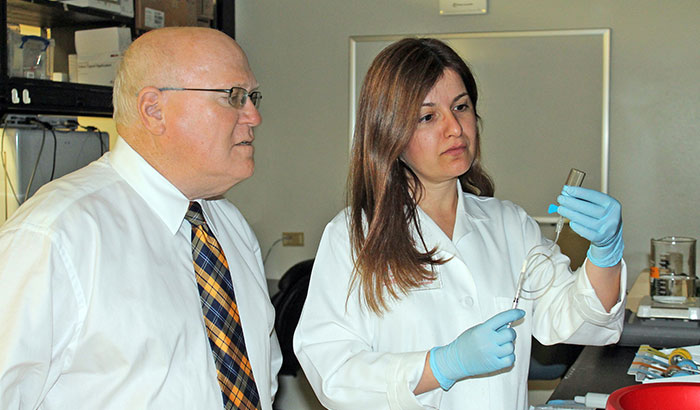 Dr. Alan Frazer, with VA and the University of Texas Health Science Center in San Antonio, looks on as colleague Dr. Flavia Carreno prepares a solution of the ketamine-like compound L-655,708  for a study in rodents. (Photo by Will Sansom)

Researchers say a drug developed for improving thinking has the ability to act like the drug ketamine, which is being studied for its antidepressant effects, without generating the problematic side effects associated with ketamine.

The findings appeared in the International Journal of Neuropsychopharmacology in June 2017.

The researchers found in lab tests that the cognitive drug, L-655,708, produced a sustained antidepressant effect in rats that was comparable to that of the anesthetic ketamine. At the same time, L-655,708 did not trigger any of the psychotic or addictive side effects that can surface when using ketamine to treat depression, the researchers say.

The researchers administered L-655,708 to see if it would increase activity in the ventral hippocampus, an area of the brain involved in emotion and stress. The hippocampus is also a key site for the antidepressant effects of ketamine, much more so than other brain regions. But ketamine’s side effects are thought to be produced by actions in areas of the brain other than the hippocampus.

"That L-655,708 was not self-administered by the rats means it is likely not to be abused by patients or non-patients."

The researchers thus surmised that the more impactful L-655,708 would be on the hippocampus, the more likely it would act like an antidepressant and not have the adverse effects of ketamine.

“Consequently, we reasoned that if we could find a drug that had a selective effect on the hippocampus that mimicked what ketamine did there, even if by a different mechanism, we might find a drug with antidepressant effects similar to those of ketamine without producing its adverse effects,” says study co-researcher Dr. Alan Frazer, a neuroscientist at the South Texas Veterans Health Care System. “L-655,708 acts on receptors [structures on the surface of a cell] that are expressed to a much greater extent in the hippocampus than in other areas of the brain.”

He and his research team write: “Identification of pharmacological interventions that repeat the therapeutic effects of ketamine, without its [psychotic] and abuse-related effects, provides a novel, safe, and effective treatment for patients suffering from refractory depression.”

Ketamine has long been used as an anesthetic for surgery and diagnostic procedures. Research has shown that use of the drug for depression can produce rapid, long-lasting effects.

While the U.S. Food and Drug Administration has approved ketamine as an anesthetic, the agency has yet to approve ketamine to treat depression. Ketamine has the potential for side effects, such as hallucinations, drowsiness, increased heart rate, and elevated blood pressure. It also has a history of abuse. Nicknamed “Special K,” it is sometimes used as a psychedelic party drug.

Frazer, who is also a professor in the department of pharmacology at the University of Texas Health Science Center in San Antonio, says the development of ketamine for treatment-resistant depression is one of the top advances in neuropsychopharmacology in the last 15 years. But the drug’s shortcomings that may stifle its routine clinical use have directed the medical community to other chemicals in the brain that can produce rapid and sustained antidepressant effects, he says.

“This has shined a light on the potential to develop other drugs, sons and daughters of ketamine if you will, that have its beneficial effects without its adverse effects,” Frazer says.

Frazer and his research team began the L-655,708 experiment by putting the rodents through a forced swim test, which is often used to gauge the impact of antidepressants. After being placed in a tank filled with water, the rodents work feverishly for a few minutes to remain afloat. Eventually, they become immobile with their head above water, a reaction that indicates hopelessness and depression-like behavior.

In the forced swim test, injection of L-655,708 produced a sustained antidepressant effect that was comparable to that of ketamine, according to the researchers. To see if the hippocampus was an important site of action for L-655,708, they tried to deactivate that region with the anesthetic lidocaine. They found that the lidocaine did cut off the antidepressant effect in the hippocampus.

The investigators also learned that ketamine in the rats blocked prepulse inhibition of startle, a procedure that is used to measure the ability of an organism to regulate the flow of sensory information. The lack of prepulse inhibition to startle can cause psychotic effects, such as hallucinations, distortion of perception, and schizophrenic behavior.

However, in contrast to ketamine, L-655,708 did not block prepulse inhibition of startle. That’s an indication that L-655,708 is “unlikely to be psychotomimetic in humans,” Frazer says.

In addition, the scientists surgically prepared the rats with an intravenous catheter so they could be trained to self-administer infusions of ketamine or L-665,708, a procedure that is used to model drug abuse. The researchers learned that the rats would press levers to self-inject ketamine, but would not press levers when L-655,708 was available.

“Taken together, these findings suggest that activation of the hippocampus by L-655,708 produces an antidepressant-like affect in the absence of any [psychotic] or abuse-related effects,” the researchers write.

As Frazer sees it, the study shows that L-655,708 has the potential to be an effective antidepressant in humans without being abused.

Frazer and his team will continue to research L-655,708 to better understand how it works in the brain to produce antidepressant effects. He declined to speculate on whether the drug will be tested clinically, saying such a process takes “time and resources.”

“Our research could lead to other types of drugs that produce the beneficial effects of ketamine and L-655,708 but in different ways,” he says. “And the more drugs available to treat depression, the better it is for patients with this serious and disabling disease.”

There is solid evidence to suggest that the drug ketamine is effective at treating depressive symptoms, but much less so for PTSD.

Now, researchers with VA and the Department of Defense (DoD) are pursuing the first large-scale randomized PTSD study of ketamine, and the first trial of the drug with Veterans and active-duty military personnel. Supported by the Consortium to Alleviate PTSD—a co-DoD, VA endeavor—the trial is expected to be completed in September 2019.

The researchers are evaluating the efficacy, tolerability, and safety of ketamine in PTSD patients who have been resistant to treatment with other antidepressants.

Dr. Lynnette Averill, a clinical psychologist at the VA Connecticut Healthcare System, is a researcher in the trial. She says treatment-resistant PTSD in this case means that someone had an adequate trial of one or more traditional antidepressants—most commonly selective serotonin reuptake inhibitors—that produced little to no clinical benefits. The antidepressant was taken for approximately a six-week period, depending on the medication.

In the context of her study, Averill adds, treatment-resistant does not include cases in which a patient failed to respond to psychologically based trauma-focused treatments, such as cognitive processing therapy or prolonged exposure.

In the study, Veterans and active-duty military personnel who meet the criteria for PTSD are randomly assigned to one of three treatment arms: placebo, low-dose ketamine, and high-dose ketamine. Ninety-eight Veterans are being randomized at a division of the National Center for PTSD at VA Connecticut, and 98 active-duty service members are being randomized at the Brooke Army Medical Center in San Antonio.

Participants are receiving the drug intravenously (IV) twice per week for four weeks.

Averill explains that most of the ketamine studies to date have called for IV injection, which means it is likely the entire dose will be absorbed into the bloodstream.

“With IV, the rate of delivery to the brain is well-known,” she says. “It can also be controlled with the rate of infusion and easily adjusted by the clinician if needed should the participant feel especially anxious or experience a significantly increased heart rate, for example.”

In contrast, less than 20 percent of the drug makes it to the bloodstream when it’s taken orally, she says. “Each person is unique in how they process the drug, but the rate of delivery to the brain is much more variable and not at all easy to control. Once the pill is swallowed, there’s very little the treatment team can do to adjust the dosing or stop the side effects until they run their course. Ketamine is processed quickly, so even with oral dosing, it’s unlikely someone will experience side effects for too long. But IV injection allows for more precision of dosing and control.”

Averill and her research team have yet to complete any statistical analyses on the PTSD study. Anecdotally, though, “Veterans are reporting significant improvements post-ketamine with their PTSD symptoms, and not only those that overlap significantly with depressive symptoms,” she says.

Drug expected to be 'safe and well-tolerated’

Ketamine has the potential to produce psychotic side effects, such as hallucinations, and can become addictive.

However, “we expect the drug will be safe and well-tolerated,” Averill says.  “We do not expect any side effects or adverse events that are more significant than what has been reported in our prior ketamine studies and by many other investigators.”

She adds: “I expect some perceptual disturbances, psychotic-like symptoms, and some elevated anxiety during the 40-minute infusions. But those will resolve quickly after the infusion is stopped.”

As Averill sees it, ketamine is most addictive when it is used for recreational purposes. She says her participants are being screened carefully for any history of problematic use and will be monitored closely throughout treatment. She notes that the dose given in clinical trials, such as the current PTSD study, is much lower than that used for anesthesia and when many people consume the drug recreationally. She says her team is unaware of any evidence suggesting that low doses of ketamine will put someone who may have a history of drug abuse at increased risk for addiction.

“To my knowledge, none of our participants to date, in this or our other studies, has developed a ketamine addiction or had any urges to use it again outside of a research or prescribed setting,” she says. “Though ketamine is well-tolerated, people generally do not report enjoying the experience or wanting to do it for fun.”

Averill is optimistic the final results will reflect positively on ketamine.

“We anticipate that ketamine will produce rapid and robust improvements in PTSD symptoms, and that these will include PTSD-specific symptoms, not simply those that overlap significantly with depressive symptoms or major depressive disorder,” she says. “There is also evidence that suggests ketamine produces rapid decreases in suicidal thoughts. That’s an exciting prospect given the suicide rates in the Veteran and military population.”

Dr. Alan Frazer is a neuroscientist at the South Texas Veterans Health Care System who is studying compounds that may serve as alternatives to ketamine to treat depression. He praised VA for supporting the ketamine trial.

“Given the incidence of PTSD in the Veteran population and the devastating effects it has on the patient and on his or her loved ones, all treatment options based on substantial preclinical data or even modest clinical data deserve to be studied in a thorough manner,” he says. “The ongoing trial is likely to yield important information on the use of ketamine for PTSD and on any limitations it may have.”