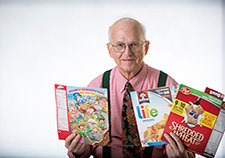 Yesterday's fruit salad is more than just leftovers. Those brown apple slices are an example of an important scientific idea: oxidation. The same can be said for a rusty bicycle, or a copper penny turned green. Oxidation is the interaction between oxygen molecules and the substances they come in contact with, from apples to metal.

It's widely accepted that oxidation inside the body is bad for health, but, until recently, scientists haven't been able to pinpoint just how bad it can be, or how to effectively treat it. According to Dartmouth professor and former longtime VA researcher Dr. Leo Zacharski, the cause is excess iron, and the result is a much higher mortality rate.

Zacharski recently retired from VA to devote more time to the study of ferrotoxic disease, which is, in layman's terms, caused by an unhealthy amount of iron in the body. "Iron is an essential nutrient that allows the body to metabolize oxygen. That is how we generate energy for all our life functions. It allows our cells to grow and breathe and survive," explains Zacharski. "But the function is precarious. When a person has excess iron in their body, it begins to oxidize and that affects nearby molecules. From lipids to proteins, and even DNA - structure and function are altered."

Think of a rusty fender turning red or brown, the color of ferric oxide. Now instead of that old hunk of metal, imagine a cell wall, or DNA.

Zacharski, a professor of medicine in the Geisel School of Medicine at Dartmouth, wrote an editorial for the November 2014 issue of the journal Clinical Chemistry titled "Ferrotoxic Disease: The Next Great Public Health Challenge." His goal, after years studying the issue at both Dartmouth and as a VA researcher, is to educate the public on the dangers of excess iron and to advocate for changes in the way iron in food is labeled.

Food labels do state whether iron is added in, and the "% daily value" for the mineral, but he believes many consumers may still be confused as to how much iron they should be getting, and which foods to steer clear of.

To understand iron in the body, you have to understand ferritin. Produced by the body to store and release iron, plasma ferritin is also a marker of the total amount of iron in the body. According to Zacharski, the higher a person's ferritin level, the lower his or her chances of living to a ripe old age.

He cites a Danish study with nearly 9,000 participants. Researchers monitored ferritin concentrations as well as mortality and illness for 23 years. Over that period, 6,364 of the participants died. Across the board, those with higher ferritin tended to die younger - much, much younger.

For example, the median survival age for participants with less than 200 micrograms per liter of ferritin was 79 years. For those measuring between 200 and 399 micrograms, it was 76 years. Participants who displayed between 400 and 599 micrograms tended to live to 72 years old. And for those in excess of 600 micrograms, death came at around 55 years, on average.

"When you look at populations of older individuals," says Zacharski, "you find much lower ferritin levels than you find in a younger population because the lower ferritin selects for old age. It allows them to live longer. The young people with higher ferritin are dropping out of the population."

Support for the theory also came from a VA trial that Zacharski and colleagues published in 2007 in the Journal of the American Medical Association. The studyinvolved nearly 1,300 men and women with peripheral arterial disease. The team found that reducing the body's excess iron stores by drawing blood might improve clinical outcomes, but only if iron reduction begins at a relatively young age.

The good news, according to Zacharski, is, as damaging as excess iron can be, it's easy to rid the body of it. In short: Eat a diet low in iron and give blood.

"Menstruating women are the healthiest population in the West," says Zacharski, "precisely because they are ridding their body of excess iron. The same goes for people who regularly give blood."

"In the West, we characteristically ingest far more iron than we need. If you look at a package of Twinkies, you see iron has been added. We need more public awareness, and specifically, we need better product labels. If you let people know that iron can hurt them, and then let them know iron has been added to a particular box of cereal, they might just pick a different box. It is this unnatural supplementary iron that is at issue in package labeling. The iron in the plant substances does not release iron readily and contributes little or nothing to noxious iron excess. Instead, what we have is widespread fortification of manufactured foods with iron but without proper labeling. We're bathed in excessive iron."

The alternative, suggests Zacharski, is to seek out foods lower in iron, or more generally, foods that are unrefined or unprocessed, with primarily natural ingredients.

"People can modify their diet and be iron-conscious. They don't need medicine, they don't need treatment. They just need to be made aware of the risks associated with excess iron," says Zacharski.

"This is a situation where we can see the culprit. We're not battling phantoms. Ferritin can be named, measured, understood, and ultimately, dealt with."

Zacharski, who is on the scientific and medical advisory board of The Iron Disorders Institute, a national public interest organization, suggests those wanting more information about iron and the body go to www.healtheiron.com.