Focus on care for transgender Veterans results in greater access 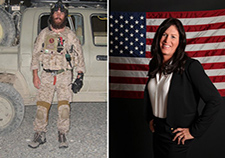 Although there are only an estimated 700,000 people in the U.S. who identify as transgender, current statistics show they are more likely to serve in the military than their peers. And although service members continue to be discharged from the military if their transgender identity is known, a new study shows that for transgender Veterans, access to VA care has become easier.

The study shows that between 2006 and 2013, VA served some 2,600 transgender Veterans, and the numbers are rising. The data, published in the September 2014 issue of the American Journal of Public Health, point to increased diagnoses of gender dysphoria as a result of new VA policies and VA's concerted efforts at educating medical staff.

Kauth notes: "We see a steady rise in diagnoses related to gender dysphoria beginning in 2009, and keep in mind this is an imperfect way to identify transgender Veterans. Two years earlier VA facilities began issuing their own local policies on providing care to transgender Veterans, and then in 2011 the national policy was released.

"It's hard to tell if the transgender Veterans themselves are contributing to increased awareness or if it is the result of our national training and raising awareness. Most likely it's both," says Kauth. "Regardless, the VA policy on transgender care has resulted in setting a uniform standard across facilities and greater access to care for a group of previously marginalized Veterans."

In June 2011, VA issued a national directive to standardize treatment services for transgender Veterans. The directive explained that transgender Veterans deserve respect and dignity and outlined treatments available, including hormonal therapy, mental health care, preoperative evaluations, and care following sex reassignment surgery. VA does not perform nor pay for the surgeries themselves.

Perhaps the most important aspect of access to care is simply educating providers and staff on the issues surrounding transgender Veterans, says Kauth.

Regarding their health care, Kauth says: "Fears of being rejected or discriminated against by health care providers can and do keep transgender people from seeking treatment. Some transgender Veterans have similar worries."

That rejection can come anywhere, not just within VA, he explains.

"Simple things like using the individual's preferred name and gender show respect, but you would be surprised how often transgender people encounter others who refuse to do this. It's not a matter of simply forgetting when it happens again and again and again.

He points out that "in the VA we have a policy that says Veterans—including transgender Veterans—are to be called by the name and gender the Veteran prefers regardless of the Veteran's legal name and birth sex."