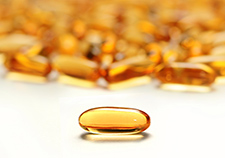 Fish oil, one of the best sources of omega-3 fatty acids, has been shown to help a range of health problems, from heart trouble to low mood. Should diabetic neuropathy be added to the list?

A new animal study from the Iowa City VA suggests the answer is yes. The study came out online Nov. 5, 2014, in the Journal of Neurophysiology.

Diabetes affects about one million VA patients, and more than half have symptoms of neuropathy, which include pain and numbness in the feet. This diabetes complication is the cause of most non-trauma-related amputations, as it often leads to serious foot ulcers that don't heal.

Dr. Mark Yorek's team with VA and the University of Iowa fed a diet rich in fish oil to rats with type 1 diabetes and diabetic neuropathy. They measured various signs of nerve health in the rats, such as their sensitivity to heat, and how well the nerves conducted electrical signals. Across several parameters, the rats showed improved nerve function.

Importantly, says Yorek, the treatment appeared to both prevent and reverse neuropathy in the series of experiments his lab performed.

He adds that fish oil is a treatment that can potentially be very easily translated into everyday care. "It requires only a capsule or two, similar to a vitamin. Some people envision that they have to take a smelly fish oil syrup, like castor oil."

The researchers didn't examine the exact mechanisms behind fish oil's effect, but Yorek says it could relate to a lowering of inflammatory stress, or a more direct effect on the nervous system: It's possible the omega-3s in the fish oil boost the body's output of compounds that help protect or regenerate nerve cells.

Fish oil already recommended by some for diabetes

Some health care providers do recommend alternative treatments for diabetic neuropathy, such as evening primrose oil or acupuncture. But fish oil has not usually been on the list of options, given the lack of firm evidence to date. The new Iowa report, plus a few other lab studies that have yielded similar results, bodes well for fish oil as treatment for neuropathy, but human trials are needed.

In his 2012 book The Omega-3 Effect, Dr. William Sears of the University of California-Irvine School of Medicine recommends fish oil or other sources of the fatty acids for diabetes, among other conditions. He explains how the fatty acids might help treat diabetes for a number of reasons, although he doesn't mention neuropathy specifically.

The Mayo Clinic, however, in a December 2014 fact sheet, does cite preliminary evidence for fish oil's effect specifically on neuropathy. The authors note that fish oil "may reduce inflammation, improve blood flow, and improve neuropathy symptoms in people with diabetes." They caution that people on anti-clotting medication should consult a doctor before taking fish oil, as it can add to the blood-thinning effect of the drugs.