ORD Home » Currents » Fall2014  » Could exercise bring some muscle to the fight against Alzheimer's?

Could exercise bring some muscle to the fight against Alzheimer's? 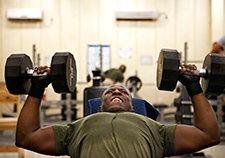 Exercise has long been sold as a cure-all for what ails us. Walk briskly and you might stave off Parkinson's disease. Exercise regularly and your chances of heart disease go down. Run a few miles on the treadmill and not only will your depression ease, you just might live longer. There are literally thousands of studies that show the health benefits of regular exercise.

Now VA and Stanford researchers are taking it a step further–studying what exactly it is about exercise that is so beneficial–in the hopes that this mystery factor might prove to be a fountain of youth, perhaps even preventing common aging-related diseases, like Alzheimer's and other dementias.

Dr. Tony Wyss-Coray and Dr. Thomas Rando, both research health scientists at the VA Palo Alto Health Care System and winners of a 2013 National Institute of Health Director's Transformative Research Award, imagine a world where the elderly, the infirm, and those with spinal cord or other debilitating injuries could take a medicine derived from the actual chemicals that exercise produces.

But how does working up a sweat in the gym, on the basketball court, or on the road exert such a positive influence on our brain? Finding out, according to Wyss-Coray, is the first step.

"We know that during exercise muscles secrete molecules that are beneficial to the body and the brain," says Wyss-Coray. Within those molecules are hormones, growth factors, and small proteins called cytokines that are integral for cell signaling. "We can see them, but they've never been really studied in a systematic fashion to tie the factor to an effect," he says.

Wyss-Coray and Rando plan to use a technique known as parabiosis to couple the circulatory systems of physically active mice with those of mice that are less active. "If we take the blood of an exercised animal and inject it into an unexercised animal, we should see positive effects," says Wyss-Coray.

The duo, also Stanford University professors, plan to then analyze the blood to identify what factors are responsible for the changes. According to Wyss-Coray, it stands to reason that if a certain molecule results in positive changes within the brain and body when it is present, then deleting it should have the opposite effect.

"It gets to the question of what normal is," says Wyss-Coray. "Thirty-thousand years ago humans were doing a lot of running around. Today many of us are almost completely sedentary. What effect does that have on our brains? And as we age and can no longer exercise, or when we're sick, or injured, such as Veterans with spinal cord damage, what are the consequences of being immobilized?"

Building on past research

The new study isn't entirely different from one published by Wyss-Coray and others in the journal Nature Medicine in June 2014 that showed blood from young mice could reverse cognitive aging in older mice. That study followed up on centuries of speculation about the effect young blood can have on the elderly. Now, says Wyss-Coray, the focus isn't just on young blood in general, but on the specific factors in the blood that have an effect on the brain.

"We're talking about possible epigenetic changes in the brain. Exercise releases these molecules and, at the DNA level, they reprogram tissue in the brain, making it more active, resistant to detrimental factors, essentially, making it younger," says Wyss-Coray. "Now ultimately, if we can isolate the factors and produce them, we'll be able to treat any number of ailments."