ORD Home » Currents » June15  » A body's own microRNA could prove the best weapon in the fight against stub... 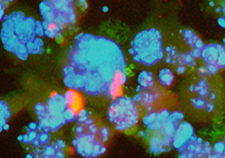 Bladder cancer is somewhat similar to a wildfire—it's easy to spot but difficult to eradicate. Sparks and hotspots always seem to pop back up. Case in point: While bladder cancer is relatively easy to detect, oftentimes quite early, some 150,000 people still die every year from the disease. It is the fourth most common cancer in men and the ninth in women.

"The non-invasive form of the disease is a treatable cancer, but it frequently recurs," says Dr. Maria Mudryj, a research biologist at the VA Northern California Health Care System in Mather, Calif. "The muscle-invasive form is far more serious, and once it gets outside the bladder and metastasizes, it's usually lethal."

Part of the problem, according to Mudryj, who is also a professor of microbiology and immunology at the University of California, Davis, School of Medicine, is that very little progress has been made in the development of new therapies. "This is an understudied cancer," she says, "and as a result, survival rates haven't really improved in the last 20 years."

New research, however, some of it conducted by Mudryj and her colleagues at UCD, suggests that certain microRNAs, small RNA molecules that help regulate genes in the body, can help suppress cancer. In a study published online in Molecular Carcinogenesis on April 11, 2015, Mudryj and her colleagues found that an overexpression of one microRNA, miR-148a, had a significant effect on bladder cancer cells. In short, it killed them.

Finding the right microRNAs to do the job

"MicroRNAs naturally occur and are encoded in the genome, with the job to tamper down the expression of various proteins," says Mudryj." One microRNA can target numerous proteins. The key is to find which ones are going to inhibit the growth of the tumor and which ones will promote the growth of the tumor. There are literally hundreds of these microRNAs scattered throughout the genome."

The team noticed that in the case of bladder cancer, there tended to be a shortage of miR-148a. "When you see any kind of shortage of a microRNA in a tumor, that is a hint the tumor, for whatever reason, is shutting something down," explains Mudryj. When they introduced it back, the cancer cells entered a state called apoptosis, or cell death. When you're treating cancer, says Mudryj, obviously this is what you want. The question was: How was miR-148a working, and what was it targeting?

"The most likely target we found was a gene called DNA methyltansferase 1," says Mudryj. "The protein this gene encodes changes the chromatin structure, which can have a global effect on the expression of genes. Targeting such a critical regulator is going to have great effect on the cell, and that's how we think this microRNA is working. It's targeting this particular gene."

Molecule can be made in the lab

The good news, says Mudryj, is that miR-148a can be produced artificially in a lab. "The technology to identify the shortage and to create the microRNA is perfectly doable," says Mudryj. "The challenge now is targeting. How do you deliver this package to the tumor, particularly if it's spread throughout the body? Targeting is a huge obstacle."

Fortunately, researchers are currently trying to overcome that challenge by exploring new methods to deliver targeted medicines throughout the body, such as research conducted at the Truman VA Medical Center in Missouri that uses a gold nanocage coated with chemicals from toad skin to target and penetrate certain cancer cells.

"If you can get this microRNA to the tumor," says Mudryj, "then this has the potential to be a really effective way of treating not just bladder cancer, but all manner of cancers."