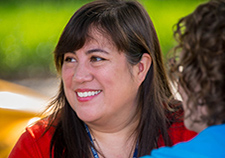 Dr. Sarah Ono, based at the Iowa City VA, is among some 60 anthropologists who work in VA research nationwide. (Photo by Steve Smith)

Dr. Sarah Ono, based at the Iowa City VA, is among some 60 anthropologists who work in VA research nationwide. (Photo by Steve Smith)

In popular culture, anthropologists work exclusively in exotic locales, studying coming-of-age rituals among primitive tribes in Samoa, Papua New Guinea, or someplace hidden deep within the Amazon. And yet the 2012 Margaret Mead award, named after one of the most famous of anthropologists, went not to an Indiana Jones-style adventurer, but to Dr. Erin Finley, a VA health research scientist at the South Texas Veterans Health Care System, for her book on Veterans' experiences in Iraq and Afghanistan.

Welcome to the world of anthropology, VA style.

"There have been anthropologists in VA for quite a long time," says Dr. Sarah Ono, an anthropologist at the Iowa City VA Health Care System. "They just tended to be called something else, either health research scientist or qualitative researcher. But we're here, and we've been steadily expanding [our ranks] for the last five years."

Some 60 anthropologists in VA system

Ono, who estimates there are roughly 60 anthropologists working for VA, recently authored an afterword for a special issue of Annals of Anthropological Practice. The issue, written and guest edited entirely by VA anthropologists, is scheduled for publication this summer.

Anthropology, as it turns out, is a broad field, and so is the research presented in the special issue. Topics range from secure messaging and patient-driven communication platforms to patient dignity in instances of spinal cord injury. A chapter written by Finley focuses on empowering Veterans with PTSD, with an eye on advancing dialogue and improving national mental health care policy.

Anthropology, broadly defined, is the study of humans. So it's easy to see how it can play a role in studies on the people who receive VA care, and those who deliver it.

"VA anthropologists are looking at issues among both Veterans and internal staff just like quantitative researchers," says Ono. "But because anthropologists are trained to put things into context and look at the big picture of how something fits into the larger VA structure, we bring a perspective that provides something quantitative research does not. We're never going to take the place of randomized controlled trials or big data. That is the standard, but whereas a statistic may say certain populations aren't compliant, for example, anthropologists try to figure out why that is and identify what barriers there are."

'The ability to bring in a different perspective'

For Ono, the big picture of VA is quite large indeed, as the agency provides health care more than 8.75 million Veterans and operates a robust research program, in addition to its other services and programs. "It's a complicated community and culture," she says, "and as an anthropologist, the ability to bring in a different perspective to the research is exciting."

That does not necessarily mean the findings from anthropologists' work are overly complicated. In ta section of the upcoming Annals issue that deals with patient dignity for those with spinal cord injuries, Dr. Jason Lind, an anthropologist based at the Tampa VA, writes that "patient care tasks like bowel care, bladder care, and bathing are very intimate and pose the greatest threat to dignity." This may seem obvious—but according to Ono, that is often the point.

"Anthropologists are good at holding a mirror up and reflecting what should be familiar," she says. "People recognize what we show them, but maybe they haven't thought about it in such a way, or realized that it was an issue that required more attention."

Commenting on the human perspective that she and her fellow anthropologists provide, Ono says: "It gives people at all levels access to personality and character rather than just numeric data. It's not just numbers. It's someone's story, and there is a real value to incorporating that kind of voice to research."