Addressing unhealthy alcohol use among Veterans: Hospital stay may be window of opportunity 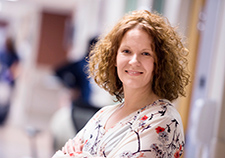 Dr. Lauren Matukaitis Broyles, a nurse researcher at the Pittsburgh VA, believes that a stay in the hospital may be the opportunity to help some Veterans with their risky drinking. (Photo by Bill George)

Dr. Lauren Matukaitis Broyles, a nurse researcher at the Pittsburgh VA, believes that a stay in the hospital may be the opportunity to help some Veterans with their risky drinking. (Photo by Bill George)

No one looks forward to a hospital stay. But for some Veterans, the event could be the right moment to begin thinking about making healthy lifestyle changes.

She is leading a study that will enroll 320 VA hospital patients who score positive on a screening tool for hazardous drinking, but who don't meet the threshold for an alcohol use disorder. The idea is to use a brief counseling intervention, including phone follow-ups, to help Veterans make positive changes and phase out their unhealthy alcohol use.

"We believe hospitalization can be a window of opportunity to engage Veterans who are drinking at hazardous levels. Many Veterans aren't aware of what the recommended drinking guidelines are, or what equals a standard size drink," says Broyles. "This is a preventive approach, in the sense that we can try to help people change their drinking patterns before there are further harmful consequences for the individual and the family."

Approach based on motivational interviewing

Hospitalized Veterans at the VA Pittsburgh Healthcare System who screen positive for hazardous drinking and consent to be in the study will be randomly assigned to either a control or intervention group. Those in the intervention group will have a series of conversations with a specially trained nurse—while still in the hospital, and then shortly afterward—designed to motivate them to change.

The approach is based on motivational interviewing. The counseling technique was first developed in the 1980s, specifically to help problem drinkers. Nowadays it is commonplace in health care, for many different types of healthy behavior changes—from increasing physical activity to taking medication properly. Experts describe it as non-judgmental, non-confrontational, goal-oriented, and person-centered.

"The idea is to elicit and encourage the person's own reasons for change, and to tap into what matters to him or her," says Broyles.

One aim of the nurse interventionist during the first session will be to create, collaboratively, an "individual change plan." Rather than one-size-fits-all advice to cut back, there'll be thoughtful, personalized advice and feedback. Was the hospital stay related to a medical problem that is made worse by alcohol? If so, that might figure in the discussion. It could be a factor in drawing out the person's own motivation and willingness to change.

A follow-up meeting, usually in the hospital, will focus on reinforcing and troubleshooting the plan, and providing encouragement. Are there barriers to putting the plan into action—for example, a family member who is not supportive? Are worries over money, or physical pain, affecting the person's ability or desire to change? Is a different strategy needed to counter those challenges?

Two weeks after the Veteran's discharge from the hospital, another follow-up will offer further reinforcement and encouragement.

Each of the three conversations will likely take only about 15 minutes—a small investment of resources that could trigger the first steps toward long-lasting health improvements, says Broyles.

Two control groups will have a similar number of contacts with a study nurse, but won't receive the intervention per se. They'll receive only general attention and information, including healthy lifestyle brochures.

After six months, the researchers will administer a phone questionnaire to all the study volunteers. They'll ask about the number of drinks consumed per week and binge drinking episodes in the past month, as well as collect other data.

If Broyles' hypothesis pans out, those who received the intervention will show the biggest reductions in unhealthy alcohol use.

Mixed results in past research

Brief alcohol interventions like the one being used in the study are already standard in VA primary care, and they are being promoted by organizations such as the Joint Commission, which accredits hospitals.

One issue is that most of the clinical trials to date have taken place outside the U.S. "We have to be careful about generalizing those results to our population, since cultural norms and attitudes about alcohol may vary," says Broyles.

Cultural issues aside, the study results overall have been weak. Some experts contend, though, that there's a methodological flaw that accounts for the less-than-impressive findings. It's called "assessment reactivity."

Boyles explains the phenomenon: "When people have their drinking habits repeatedly assessed as part of a study, it gets them thinking a lot about their drinking, any negative consequences that they may be experiencing, big or small, and how they feel about all of that. Other studies have shown that as a result of the personal reflection that arises from comprehensive alcohol questionnaires, people will often reduce their drinking, even if they weren't in the intervention group that received the brief counseling sessions."

In some past trials of brief alcohol interventions, this has translated into reduced drinking on the part of all study participants whether they received an intervention or not. This dulls the statistical differences between study groups. Even so-called "control" groups show some improvement. The researchers may sense that the intervention works, but at the end of the day they lack the data to back that conclusion.

Broyles' study is designed to try and thwart this complication. The two control groups will both receive "usual care," with no brief intervention, but they will get different amounts of assessment. That will help the researchers tease out the effects of the assessments versus the intervention itself.

On top of that, the study team will take steps to assure that the brief intervention is being delivered properly—such as audio-recording the first sessions between the patients and the nurse.

All in all, says Broyles, the study is "methodologically rigorous" and should "provide strong evidence regarding the efficacy of brief interventions in the inpatient setting. If so, it could mean that hospitalization is a good time to start this type of conversation, which can then be followed up on in primary care."

The new study is described in an article expected out soon in the journal Addiction Science and Clinical Practice.