ORD Home » Currents » Spring2015  » For some, hand gestures could be key to unlocking memories

For some, hand gestures could be key to unlocking memories 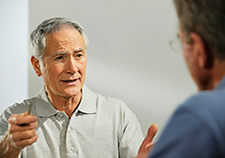 Researchers with VA and the University of Iowa have explored the role of hand gestures in learning and memory, and how certain disorders affect that process. (Photo: ©iStock/Pali Rao)

Researchers with VA and the University of Iowa have explored the role of hand gestures in learning and memory, and how certain disorders affect that process. (Photo: ©iStock/Pali Rao)

For most people, hand gestures during a conversation are an unconscious act. But they serve an important purpose: facilitating communication. Gestures transmit ideas from the speaker to the listener. They provide visual cues to the speaker's ideas and add to the spoken words. Studies have even shown that much of the information transferred during communication is nonverbal, with gestures playing a key role.

Memory too, can be impacted by hand gesture. People learn and remember information from the gestures they see and produce. How these processes work, however, is still largely unknown.

To start with, one has to understand the difference between declarative and procedural memory. The former involves facts and knowledge. If someone asked what you were doing yesterday or what the capital of Maryland is, you would use your declarative memory to answer. Procedural memory, on the other hand, is more functional—like riding a bicycle. These memory systems are known to rely on different parts of the brain and can break down due to different neurological disorders.

Now new research suggests hand gestures activate procedural memory cues. In a study published in Frontiers in Human Neuroscience in January 2015, Nathaniel Klooster, a neuroscience graduate student at the University of Iowa, compared the way gestures affected memories in people with and without Parkinson's disease.

Klooster's research was overseen by Dr. Ergun Uc, a neurologist with the Iowa City VA Health Care System and an associate professor of neurology and neuroscience at the University of Iowa Carver College of Medicine.

Multiple ways the brain and body pick up information

"When they think of memory, most people think of declarative memory, but there are multiple memory systems and other ways the brain and body are picking up information and holding onto it over time," says Klooster.

For the study, Klooster had nine participants with Parkinson's disease and 18 healthy participants tackle the Tower of Hanoi task, a puzzle involving three pegs and numerous disks of different sizes. Put simply, the challenge begins with all the disks in one stack, with the largest disk on the bottom and the smallest on top. The object is to move all the disks to another peg while following three simple rules:

Participants worked on the puzzle with both an actual physical set and a virtual model on a computer.

In order to test gesture comprehension, the participants were shown one of two videos of someone explaining how to solve the puzzle. Embedded in the videos were visual cues, gestures if you will, that should have influenced the viewers. For instance, one video showed high, arcing gestures as the speaker described moving the discs from one peg to another. The other video featured smaller, horizontal gestures.

Viewing gestures had no effect on Parkinson's patients

"Listeners were sensitive to the information in the gestures they saw," says Klooster. "So the information they saw on how to move the disks was reflected in their later movements. If they saw really high, arching gestures, they moved the disk with a higher curvature than if they saw flat, sideways gestures." Except, says Klooster, for those with Parkinson's disease. For those participants, movements were the same, regardless of what they had seen. In other words, for patients with impaired procedural memory, gestures had little or no effect on their memory.

By the same token, the findings suggest that a healthy procedural memory system underlies the ability of gestures to drive learning. The results could have implications for patients with other memory impairments—for example, Alzheimer's disease, or even just the normal memory loss that occurs as people get older.

"This opens up new areas of investigation," says Klooster. "This is a first step, but perhaps we could look at gesture in patients with impaired declarative memory for signs of their previous experiences. They might not be able to talk about the experiences because they're not accessible to the declarative memory system anymore, but maybe we can see evidence of those experiences in their gestures."

The work was supported by VA, the University of Iowa, and the National Institute on Deafness and Other Communication Disorders.