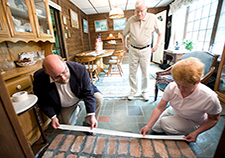 In this 2009 photo, caregiver Ann Cameron helps Scott Trudeau apply tape to a step in the home she shared with her husband, Donald (in the background), who has Alzheimer's disease. To prevent accidents on the stairs, highlight step edges with contrasting tape to make steps more visible. Two-inch duct tape works well. Put one strip across the entire edge of each step, with an inch covering the stair tread and an inch folded down below the edge of the step. (Photos by Frank Curran)

In this 2009 photo, caregiver Ann Cameron helps Scott Trudeau apply tape to a step in the home she shared with her husband, Donald (in the background), who has Alzheimer's disease. To prevent accidents on the stairs, highlight step edges with contrasting tape to make steps more visible. Two-inch duct tape works well. Put one strip across the entire edge of each step, with an inch covering the stair tread and an inch folded down below the edge of the step. (Photos by Frank Curran)

Ann Cameron lives in a tidy two-bedroom rancher just across from the Merrimack River, outside of Boston. Her husband, Donald, a former gunner's mate in the Navy and library custodian, has Alzheimer's disease and is now in a nursing home. But she says he was able to stay at home with her for several years after his diagnosis—and remain safe—thanks to innovative research by a team with VA and Boston University.

"The assistance of [the researchers] and the materials they provided enabled Donald to remain at home for several years longer than he could have otherwise," says Cameron, 68.

She and other family caregivers took part in studies based at the Bedford (Mass.) VA Medical Center and Boston University aimed at boosting home safety for those with Alzheimer's. Now, building on this work, the investigators are teaming with VA primary care providers in two regions—New England and the Mid-Atlantic—to disseminate a research-based home safety toolkit they have developed.

"We're not waiting until someone falls down the cellar stairs and breaks their hip, to change the way the house is formatted. We're saying, if we make these simple changes now, we stand a good chance of preventing these types of accidents."

New effort based on past research

The research dates back to 2000. The first goal was learning what types of changes are practical and effective for families to implement. The National Institute on Aging, Alzheimer's Association, and other organizations had put out home-safety tips for years. But not all the tips were equally doable for caregivers, says Trudeau's colleague Dr. Kathy Horvath, with the GRECC and Boston University's Alzheimer's Disease Center.

"Many of the recommendations that were available were not research-based. They were often overwhelming to people, and they didn't know where to begin. Some recommendations were just lacking in the detail that people need."

As an example, she cites the suggestion to highlight the edges of steps with white or colored duct tape, to provide contrast. People with Alzheimer's have trouble with perception and are more likely to trip and fall. "As one family member asked us," says Horvath, "does the tape have to go on all the stairs? Does it have to go across the entire stair? Just in the middle? These are the kinds of details people have questions about."

Horvath and Trudeau, an occupational therapist, studied which interventions worked best. One factor they explored was cost: Caregivers were unlikely to make changes that were too pricey. The average cost of home-safety products installed in families' homes was $79 in the original study. This included items such as grab bars for the shower, nightlights, stove-knob covers, and child-safety locks for cabinets.

Families also were unlikely to make changes that took too much time, required technical help, caused an inconvenience, or altered the look of the home.

Says Horvath, "Something might sound like a great idea from the professional's viewpoint, but if people aren't going to do it, what have you accomplished?"

Their research resulted in a 25-page, illustrated, simple-language guide. The booklet was tested for "health literacy" to make sure people could easily understand the instructions.

Then Trudeau and Horvath put together a Home Safety Toolkit that consisted of the booklet plus a canvas bag with sample low-cost safety items, costing about $200 in 2015. Through a clinical trial funded by VA and Boston University, they tested the kit with 108 pairs of patients and caregivers.

The changes shown in this slideshow are only some of the safety modifications recommended in the booklet Keeping the Person with Memory Loss Safe at Home. The booklet and an accompanying kit stocked with low-cost home safety products were tested among families by researchers with VA and Boston University.

Shaving with a straight edge or safety razor poses a risk for cuts. Use a cordless rechargeable electric shaver in place of a razor. A cordless shaver is safer than a corded one because it won't cause a shock if it's dropped in water.

To prevent accidents on the stairs, highlight step edges with contrasting tape to make steps more visible. Two-inch duct tape works well. Put one strip across the entire edge of each step, with an inch covering the stair tread and an inch folded down below the edge of the step.

Though hard to see in this image, the brick landing is 10 inches higher than the slate floor leading up to it. Such height differences may be difficult to discern for people with dementia. Highlighting the step edge with tape helps avoid falls.

Use a daily medication dispenser, such as a big pillbox. Don't keep medicines and vitamins out on the counter. Instead, hide or lock them in a cabinet or closet.

The stove can be risky for those with memory loss. Remove stove knobs and hide them in a nearby drawer. (See next slide for an alternative.)

Instead of removing stove knobs, you can use safety covers.

Use a child-safety lock to store away cleansers, knives, small appliances, or other potentially hazardous items in a kitchen cabinet.

Caregivers should keep a flashlight, as well as a telephone, near the bed in case of nighttime emergencies.

Install smoke alarms on each level of the home, including the basement. Test them monthly and replace the batteries as needed.

Install grab bars in the tub and shower. Make sure they're screwed into studs.

Replace glass shower doors with a curtain, install a handheld shower head, and use a non-skid bathmat in the tub.

Install a slide-bolt lock toward the top or bottom of a door that leads outside—not near the doorknob—so the lock will be less noticeable. Also, use portable motion sensors, like the white unit sitting on the shelf near the door, to let the caregiver know when the person with dementia is trying to go out into the street. This is especially important for homes on busy streets with lots of traffic.

Make sure outside stairs have railings, and keep porches and walkways clear of clutter, such as flowerpots or statuettes.

The tips depicted in this slideshow, along with other home modifications, can improve safety for those with Alzheimer's disease and their family caregivers. A worksheet on Alzheimer's home safety can be found at www.bu.edu/alzresearch/care/safety. For additional information, visit:
www.alz.org
www.alzheimers.nia.nih.gov
www.caregiver.org
www.aoa.gov/

No approach is foolproof

The results appeared in 2013 in the International Journal of Alzheimer's Disease. The study found that in families that used the toolkit, versus those receiving usual care, there was less caregiver strain, more caregiver self-efficacy, better home safety, and fewer accidents and risky behaviors among those with Alzheimer's.

Now, the focus is on spreading the word, and getting the tools into the hands of the caregivers who need them. The team has funding to work with VA primary care clinics and other partners, such as VA's Prosthetics and Sensory Aids Service, to study the best way to do just that. The funding is through VA's Quality Enhancement Research Initiative, which specializes in translating research findings into everyday care.

The researchers stress that no approach is foolproof.

"There's no such thing as a completely safe home," says Trudeau, who has worked with people with dementia for some 20 years. "What we can do is make the home environment safer, for both the caregiver and the person with Alzheimer's.

Nothing, he says, can replace the need for close supervision of someone with memory and judgment problems, "but the modifications we recommend can lessen the intensity of the vigilance required on the part of caregivers."