ORD Home » Currents » Spring2015  » To amputate or not: VA, DoD to study long-term effect of vascular injury in...

To amputate or not: VA, DoD to study long-term effect of vascular injury in wounded Vets 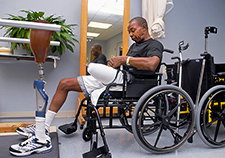 Columbus Freeman of Arkansas, who served 17 years in the National Guard, underwent two amputations on his left leg—first below the knee, and then above—as the result of vascular blockages. A new VA-DoD study is looking at the long-term outcomes of Veterans who suffered severe vascular injuries but did not have their limb amputated. (Photo by Jeff Bowen)

Columbus Freeman of Arkansas, who served 17 years in the National Guard, underwent two amputations on his left leg—first below the knee, and then above—as the result of vascular blockages. A new VA-DoD study is looking at the long-term outcomes of Veterans who suffered severe vascular injuries but did not have their limb amputated. (Photo by Jeff Bowen)

Columbus Freeman is one of the Veterans featured in a musical slideshow tribute titled "Till the Battle Has Been Won."

Dr. Mary Jo Pugh, a research health scientist with the South Texas Veterans Health Care System, was recently on a plane with a Veteran who had suffered a traumatic injury to his leg. The Veteran was telling her all the things he could do, despite his injury and the near-constant pain associated with it. Then he paused for a moment before mentioning another Veteran, a friend of his, someone who had also experienced a leg injury in combat, except this friend had lost his leg and now wore a prosthesis.

The friend, the Veteran told Pugh, could run.

The issue runs to the very core of battlefield medical care, with surgeons doing their absolute best to save everyone, down to the last limb. What is lacking, however, is information on the effects of saving badly damaged limbs. A host of challenges, from chronic pain to limb weakness, can lead to a difficult recovery. And experts lack knowledge on what a healthy recovery even looks like over the long term.

To gather that information, Pugh, along with Dr. Paula Shireman, convened a multidisciplinary team from VA, the University of Texas Health Science Center San Antonio, and the San Antonio Military Medical Center. They are recruiting Iraq and Afghanistan Veterans with combat-related vascular trauma in their extremities for a three-year study.

She estimates there are as many as 1,500 such Veterans receiving VA care. "If we can get even a few hundred of those to take part in the study, the data we'll be able to collect will go a long way to helping both DoD and VA care for these types of patients."

Imagine a soldier in a Humvee, says Pugh, and an improvised explosive device goes off. The shrapnel from that explosive does extensive damage not only to flesh and bones and nerves, but also to blood vessels.

In previous wars, such injuries typically meant amputation. Or, as often as not, the wound would be fatal, due to accompanying torso injuries or a slower medevac. Improved body armor and battlefield triage have changed that dynamic. The U.S. currently boasts an over 90-percent survival rate following combat injury.

As many as 60 percent of those injuries involve limbs. Of those, says Pugh, 12 percent involve vascular damage. By comparison, that's five times higher than in previous wars.

Military surgeons, though, have tough decisions to make. Thanks to advances like in-theater use of diagnostic angiography and endovascular treatment, field surgeons are now able to make advanced efforts to save limbs. What they don't know, however, is the long-term outlook for the service member whose badly wounded limb is saved.

Current knowledge based on older patients with chronic disease

She points out that "not having an amputation doesn't mean everything is fine. There is often chronic pain associated with these types of injuries. Not to mention the psychological cost. If we have a Veteran going through procedure after procedure and then finally losing the limb anyway, that is going to affect their quality of life, not to mention the overall health care costs.

Pugh adds: "If the surgeons on the battlefield go through these heroic measures to save a limb and we find out five years down the road that even 50 percent of the patients have an amputation anyway, then we need to determine if certain approaches might improve outcomes. That is where the VA-DoD collaboration is fantastic. We have the opportunity to link battlefield care to long-term outcomes within VA. This has the potential to change battlefield care and improve outcomes for future generations of Veterans."

Recruitment for the study will begin in fall 2015.