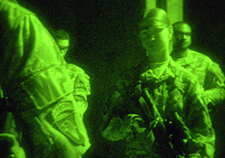 U.S. Army soldiers receive instruction while waiting for Iraqi detainees to unload from a bus in Baghdad in 2008. Veterans with PTSD are at higher risk of heart failure as they age, according to a new VA study. (Photo by Spc. Richard Del Vecchio)

U.S. Army soldiers receive instruction while waiting for Iraqi detainees to unload from a bus in Baghdad in 2008. Veterans with PTSD are at higher risk of heart failure as they age, according to a new VA study. (Photo by Spc. Richard Del Vecchio)

In a study of more than 8,000 Veterans living in Hawaii and the Pacific Islands, those with posttraumatic stress disorder had a nearly 50 percent greater risk of developing heart failure over about a seven-year follow-up period, compared with their non-PTSD peers.

The findings appear in the April 2015 issue of the American Journal of Public Health.

The study adds to a growing body of evidence linking PTSD and heart disease. The research to date—including these latest findings—doesn't show a clear cause-and-effect relationship. But most experts believe PTSD, like other forms of chronic stress or anxiety, can damage the heart over time.

"There are many theories as to how exactly PTSD contributes to heart disease," says Dr. Alyssa Mansfield, one of the study authors. "Overall, the evidence to date seems to point in the direction of a causal relationship."

Heart-mind mystery: Unraveling the link between PTSD and heart disease

Mansfield was senior author on the study while with the Pacific Islands Division of the National Center for PTSD of the Department of Veterans Affairs (VA). She is now with the VA Pacific Islands Health Care System and also an assistant adjunct professor of epidemiology at the University of Hawaii.

The study tracked 8,248 Veterans who had been outpatients in the VA Pacific Islands system. The researchers followed them an average of just over seven years. Those with a PTSD diagnosis were 47 percent more likely to develop heart failure during the follow-up period. The researchers controlled for differences between the groups in health and demographic factors.

Combat service, whether or not it led to a full-blown PTSD diagnosis, was itself a strong predictor of heart failure. Those Veterans with combat experience were about five times more likely to develop heart failure during the study period, compared with those who had not seen combat. Other predictors of heart failure were advanced age, diabetes, high blood pressure, and overweight or obesity.

The authors of the study say they didn't have access to a full range of data that would have provided further clues as to the PTSD-heart disease link. For example, they were not able to distinguish in the data between those who had served in the Gulf during 1990 and 1991, and those who served more recently in Iraq or Afghanistan. Nor were they able to analyze whether racial or ethnic identity plays a role one way or the other, as that information was not complete for most Veterans in study.

Nonetheless, the authors point out that the work is the "first large-scale longitudinal study to report an association between PTSD and incident heart failure in an outpatient sample of U.S. Veterans."

Heart failure, in which the heart grows weaker and can't pump enough blood to adequately supply the body's needs, affects about 5 million Americans in all, with some 500,000 new cases each year. People with the condition feel tired with physical activity, as the muscles aren't getting enough blood.

The new results, says Mansfield, provide further potent evidence of the nexus between mental and physical health. The practical upshot of the findings, she says, is that Veterans with PTSD should realize that by treating their PTSD, they may also be helping to prevent heart disease down the road.

By the same token, the authors point out that VA and other health care systems may need to step up efforts to prevent and treat heart failure among those with PTSD.