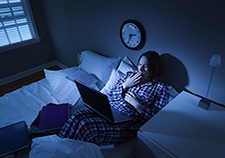 Sleep. It's like a cure-all for the brain, aiding recovery and assisting in everything from stress-reduction and concentration to maintaining a healthy weight. But for the approximately 60 million Americans, many of them Veterans, who suffer from frequent insomnia, sleep can be a hard commodity to come by.

"Sleep is important just for overall coping and functioning throughout the day," says Dr. Erin Koffel, a psychologist at the Minneapolis VA Medical Center. "Patients who don't get good sleep have more difficulty dealing with stressful situations, they have decreased thinking ability, and they may be at increased risk for chronic pain."

According to Koffel, while medication and cognitive behavioral therapy are both effective treatments for insomnia, psychotherapy may provide more long-lasting benefits. Unfortunately, the availability of individual therapy is sometimes insufficient to meet the demand.

Now a new meta-analysis, led by Koffel, suggests cognitive behavioral therapy is a powerful treatment for insomnia, even when delivered in a group format. Koffel and colleagues from the universities of Minnesota and Pennsylvania, as well as the Philadelphia VA Medical Center, combined and analyzed the data from eight previous studies studies on group therapy for insomnia. The results of the analysis appeared online May 14, 2014, in Sleep Medicine Reviews.

Neither the primary studies nor the meta-analysis directly compared group to individual therapy. Says Koffel, "While it's likely that the more resource-intensive individual therapy will always have an edge over less intensive therapies, group therapy does appear to be a very powerful and effective treatment for insomnia."

"One of the surprising things was that not only were improvements in sleep maintained, we saw additional improvements after therapy was over," says Koffel. "This durability of treatment, or how long positive outcomes can be maintained, is the major advantage behavioral treatments have over pharmacological treatments for insomnia."

Koffel says the three basic components of cognitive behavioral therapy for insomnia are stimulus control, sleep restriction, and the cognitive component, or "discussing how people think about sleep."

Stimulus control involves ensuring the bedroom or bed is used only for sleep or sex. "Patients need to get out of bed when they can't sleep and go in the other room," says Koffel. Meanwhile, sleep restrictions are put in place to ensure patients don't spend too much time in bed. Koffel says that aspect of treatment "builds up an appetite" for sleep.

The third component, the cognitive portion, can often be the most difficult. "Patients know they need sleep and when they can't, they begin to have unhealthy thoughts and catastrophic thinking," says Koffel. " If I can't sleep I'll have a horrendous day tomorrow. I won't be able to do my job and get fired. Thinking like that triggers anxiety and as a result, the harder they try to sleep, the less effective they'll be."

There are other tools in the works. VA's National Center for PTSD has an app for insomnia-related cognitive behavioral therapy that is currently in testing. Similar to the PTSD Coach app, it is designed to be used in conjunction with therapy. Such technologies, which can help patients track sleep or maintain a sleep diary, are becoming an integral part of insomnia treatment for Veterans, says Koffel. "When patients come to see me, they often forget their sleep records or diaries," she says. "But no one forgets their phone. That alone would help."

Another advantage of group therapy is that it builds off the camaraderie that is often already present among Veterans. "The Veterans I work with report additional benefits from group therapy that they weren't getting in individual sessions. That sense of support and encouragement from other Veterans can be beneficial," says Koffel. "These are difficult changes we're asking people to make, and having a group to support you can really make a difference."