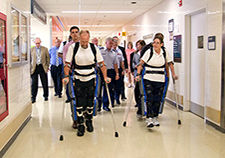 For people who have lost the use of their legs, "don't just go for a ride, go for a walk," would seem at best an empty promise, at worst a cruel taunt. However, a new product called ReWalk makes that pledge to its users. As a number of New York City-area Veterans have recently learned, ReWalk delivers.

ReWalk is an exoskeleton suit, worn outside a person's clothes, providing powered hip and knee motion to enable those with spinal cord injuries (SCIs) to stand upright and walk. Dr. Amit Goffer, an Israeli biomedical engineer who is himself quadriplegic, invented it.

The system integrates a wearable brace support, a computer-based control system, and a tilt sensor. It allows patients who cannot move their legs by themselves to stand and walk independently with crutches, mimicking a natural gait.

In June 2014, ReWalk received approval from the U.S. Food and Drug Administration (FDA) for use at home and in the community with a companion. The approval was based mainly on a two-year clinical trial at MossRehab in Philadelphia. For several years before FDA approval, though, Veterans at the James J. Peters VA Medical Center in the Bronx, N.Y., had also been testing the new system.

According to Dr. Ann Spungen, associate director of the hospital's Center of Excellence on the Medical Consequences of Spinal Cord Injury, 13 people with SCI have already been trained to use ReWalk.


Click here for an updated version of this sidebar article, reflecting the award for Spungen and Bauman that was announced Sept. 22, 2014.

"We wanted to find out if we could get some people walking in the exoskeleton, and if there were any reported changes to their health status," Spungen explains.

The patients who participated in the entire study wore the suit for 4 to 6 hours per week for about four months. Most participants had 40 to 80 sessions using ReWalk.

When patients are trained to use the device, they first learn how to go from sitting to standing and back again. They also must learn how to shift their weight to their left foot to unweight the right foot to be free to take a step, and then to shift their weight to their right foot. Then, they learn how to catch themselves with their crutches in a 360-degree circumference, so that if they go forward, backward, or to the sides, they can use their crutches to keep from falling.

"They have to learn all that before they take their first step," explains Spungen. "It takes one to five sessions for an individual to get basic standing skills—but once they get them, we have them start stepping, and then walking. Some patients walk sooner than others."

A research participant tries the ReWalk at the Bronx VA Medical Center during a visit by Congressman Charles Rangel, football star Sean James, and others. (Photo by Lynne Kantor)

A research participant tries the ReWalk at the Bronx VA Medical Center during a visit by Congressman Charles Rangel, football star Sean James, and others. (Photo by Lynne Kantor)

"The system had significant beneficial effects in most of the patients," she reports. "All of them reported an improved quality of life. We measured this with a survey tool called SCI-Qol, which was specific to spinal cord injury."

As U.S. Army Veteran Gene Laureano told the New York Daily News, "When I get in it and start walking, I feel normal like everybody else. It's the greatest feeling to be eye level with people." Laureano said that the first time he stood up using the exoskeleton, he came close to tears.

Spungen says she and other researchers at the Center of Excellence will continue to test the unit even now that it's been approved by the FDA. The center has been recommended for funding from the Department of Defense. If funding is approved, the center will work with researchers from the University of Maryland and the Kessler Foundation Research Center to conduct a randomized clinical controlled trial to get a larger number of people with SCI to walk using the system.

"We're trying to learn who becomes the good walkers with the device, and how soon they become good walkers," says Spungen. "We're also studying the level of spinal cord injury and demographic characteristics associated with the ability to walk."

Another study, funded by the New Jersey Commission on Spinal Cord Research, will look at changes occurring in muscle and bone as a result of walking in these devices in people with paralysis. Preliminary data on the 13 current walkers showed improvement in both fat mass and bowel function. As part of this Kessler Foundation Research Center study, the Bronx Center of Excellence will help to study these effects over 100 sessions to see if improvements continue—and if there will also be improvements in muscle composition and bone strength and density.

Finally, the center hopes to study how Veterans use the exoskeleton at home. "We still don't know who are the best candidates for ReWalk. Are people really going to use these devices once they get them in their homes? And are they really going to be able to count on their companions for help—because the FDA has only approved these for use with a companion?" asks Spungen. "There are lots of research questions still out there to be answered."

Drs. Ann Spungen and William Bauman of the Center of Excellence on the Medical Consequences of Spinal Cord Injury at the Bronx VA Medical Center are among five finalists for the 2014 Samuel J. Heyman Service to America Medal in the category of Science and Environment. The winners will be announced on Sept. 22.

Spungen and Bauman have collaborated for nearly 25 years at the James J. Peters VA Medical Center to improve the health care and quality of life of paralyzed Veterans by developing new ways to treat long-overlooked medical problems.

The two researchers and their collaborators have made great strides in understanding the effects of SCI on the body. Their work has led to the realization that persons with SCI are at a markedly increased risk for heart disease. They were the first to describe and then treat an asthma-like lung condition common in those with higher levels of paralysis. They have developed approaches to make it easier for paralyzed patients to undergo successful colonoscopies.

Along with other researchers at the center, they have formulated novel drug combinations to raise low blood pressure. They have overseen the development of animal and clinical treatments to reduce bone loss shortly after SCI. Their work in understanding and treatment of chronic, non-healing pressure ulcers has significantly advanced knowledge in this area.

Besides the current ReWalk projects, investigators under their direction are making strides toward improving the understanding of body temperature regulation, and the effect of swings in body temperature on people's ability to think.

The Service to America Medals, known as the "Sammies," are presented annually by the nonprofit, nonpartisan Partnership for Public Service to celebrate excellence in the federal civil service. The Science and Environment Medal recognizes federal employees for significant contributions to the nation in activities related to science and the environment.