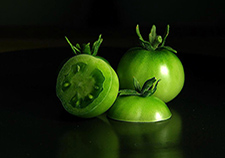 VA and university researchers found that a compound in green tomatoes may help prevent muscle atrophy, and decrease fat. (Photo by Jon Sullivan via Wikimedia Commons)

VA and university researchers found that a compound in green tomatoes may help prevent muscle atrophy, and decrease fat. (Photo by Jon Sullivan via Wikimedia Commons)

Skeletal muscle atrophy, or the wasting away of muscles due to illness or aging, can be debilitating and lead to loss of independence. Live to 60 years old and there's a 13 to 24 percent chance you'll develop it. Make it to 80 years old and the odds jump to 50 percent.

A new study says the answer to skeletal muscle atrophy may have been in our gardens the whole time...as long as we get to the tomatoes before they ripen.

A team of researchers from the University of Iowa and the Iowa City VA Medical Center found that tomatidine, a compound made in the body when people eat green tomatoes, builds muscle, protects against atrophy, and actually helps decrease fat. The results, published online April 9, 2014, in the Journal of Biological Chemistry, suggest that ill or aging patients could benefit just by eating more green tomatoes.

Mice on tomatidine had bigger muscles

The results offer promise for the more than 50 million people with skeletal muscle atrophy. Caused by conditions ranging from malnutrition and prolonged bed rest to spinal cord injury or cancer, skeletal muscle atrophy places a tremendous burden on both patients and families. The loss of strength associated with it can lead to bone fractures, fatigue, and loss of endurance. For many patients, the end result is placement in a nursing home.

Current treatment options include physical therapy and nutritional optimization, which are often not enough, particularly for patients who are too ill or injured to exercise. Pharmacological treatment options, meanwhile, are limited.

The team, which previously showed the benefits of apple peels in sparking muscle growth, focused this time on tomatoes, specifically the compound tomatidine. Tomatidine is produced when alpha-tomatine, which is found in tomato plants, is digested. According to the study, alpha tomatine is found mainly in green tomatoes. By the time the fruits ripen, they've lost approximately 99 percent of the compound.

The researchers found that mice fed a diet of tomatidine developed larger muscles than those that were not. Interestingly enough, those same mice maintained their weight due to a corresponding amount of fat loss, suggesting tomatidine could also have a future in weight-loss treatment.

While the study focused only on the effect of tomatidine in mice, the researchers suspect the same mechanisms are at work in humans and have started a biotech company called Emmyon to further the research.