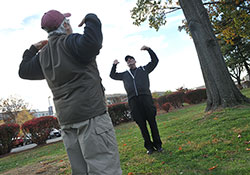 Vietnam Veteran Stan Fisher takes part in a qigong class led by Dr. Mike Basdavanos on the campus of the Washington, DC, VA Medical Center. The class is offered through the siteâ€™s War-Related Illness and Injury Study. Photo by Robert Turtil

Vietnam Veteran Stan Fisher takes part in a qigong class led by Dr. Mike Basdavanos on the campus of the Washington, DC, VA Medical Center. The class is offered through the siteâ€™s War-Related Illness and Injury Study. Photo by Robert Turtil

On a stretch of lawn framed by tall pines and crimson-colored hedges, a group of Veterans practices qigong, an age-old form of exercise from China. Their movements are slow and deliberate, in sync with their breath. The soothing sounds of traditional Chinese string and bamboo instruments float up from a portable CD player that sits on the grass.

The setting is peaceful. It's a sharp contrast to the stress of war that some of the Veteran still carry in their minds—and in their bodies—even decades after deployment.

"I like the exercise. It helps me stretch, open up, work on my range of motion," says Stan Fisher, 68, who served with the Marines in Vietnam.

Qigong is one of many healing activities offered at the War-Related Illness and Injury Study Center (WRIISC) based at the Washington, DC, VA Medical Center. The WRIISC in the nation's capital is one of three such VA centers nationwide. The others are in East Orange, N.J., and Palo Alto, Calif.

In the vanguard of integrative medicine in VA

The centers offer comprehensive clinical evaluations for post-deployment Veterans with complex health conditions with no known cause. They also do assessments for Veterans from any era, referred by their VA providers, who believe they may have been exposed to toxic chemicals or other environmental hazards during their deployment.

In recent years, complementary and alternative medicine, or integrative medicine, has become a staple at the WRIISCs. The trend reflects—and perhaps has helped drive—a wider such trend at VA medical centers nationwide. A 2011 survey found that 9 in 10 VAMCs offer in-house, or provide referrals for, at least some complementary and alternative treatments. The most popular are meditation or other forms of stress management and relaxation therapy.

"The Veterans are coming because they're very interested," says Dr. Amanda Hull, a psychologist who runs the Integrative Healthcare and Wellness Program at the Washington, DC, WRIISC. "They are very excited to see what we offer. They and their providers are looking for something that may help."

She says the WRIISCs apply a rigorous research approach to everything they do—including mind-body practices such as qigong, acupuncture, and various forms of yoga and meditation, all of which offer mental as well as physical health benefits. The treatments are backed by scientific evidence, and the WRIISCs are conducting further study as they go along.

A group at the Palo Alto WRIISC, for example, has been studying the pros and cons of delivering yoga via telehealth to Veterans who live far from locations with live VA classes. So far, the interactive video hookup has reached Veterans at VA community-based outpatient clinics in the California cities of Stockton, Fremont, San Jose, Monterey, and Modesto. More than 100 Veterans have been referred for the program. Yoga instructor and researcher Louise Mahoney says, "We have had no adverse events, and Veterans report enjoying the classes and receiving benefits such as increased strength, energy, and flexibility, and reduced pain and stress." She says the technology could potentially "open the practice of yoga up to a whole new group of Veterans."

Yoga is also on the research agenda at the Washington, DC, WRIISC. Among other studies, investigators there have been examining whether iRest Yoga Nidra can help Veterans with traumatic brain injury cope with chronic pain. This type of yoga involves mindfulness meditation. It's been studied extensively at Walter Reed Army Medical Center and other sites, and is now used widely in VA, but researchers are still exploring its benefits for specific populations and health conditions.

Hull, a trained iRest facilitator, also has a strong interest in what she calls "nutritional psychology"—the science of how nutrients affect mood and behavior. She leads an eight-week class on integrative health education that includes some of these topics.

"I'll talk about what sugar does in the brain. I'll draw a cell and say, â€˜Here's how fat is used in the body. This is why we need this type of fat but not that type.' It's very basic, but very powerful. It's not the type of education most people are getting."

The emphasis, she notes, is on giving Veterans "tools for their toolbox. They play an active role in their own care."

Group acupuncture among most popular classes

One of the most popular drop-in classes sponsored by the Integrative Healthcare and Wellness Program at the Washington, DC, WRIISC is group ear acupuncture, held every Tuesday and Thursday. Up to 20 or so Veterans, of all ages and backgrounds, sit in chairs around a long table in a basement conference room. The walls, painted lavender, are adorned with framed photos of flowers. Despite the busy hallway outside the door and occasional intrusions from the PA system, acupuncturists Dr. Jeanette Akhter and Alaine Duncan work to create a calming atmosphere.

As a session begins, Duncan reminds the group to turn off their cell phones, remove their hats and eyeglasses, even loosen their belts and untie their shoes. She asks them to shift their attention to their weight in the chair, to focus on the moment, their body in space. Mellow New Age music fills the room, sounding like a gentle rain shower.

"Notice the circle of Veterans around you," Duncan says softly to the group. "As the room starts to feel quieter, you might start to feel quieter on the inside too. It's all part of getting your qi—your energy—ready to receive treatment."

The treatment consists of five tiny needles placed at specific points on the outer ear. In traditional Chinese medicine, the ear is thought to contain a "map" of the entire body. So tapping into the ear's energy points can trigger a cascade of calming effects.

"You can access a lot of body organs and body systems through the ear," explains Hull.

She tells of one Veteran who told her his pain goes away for at least three days when he gets treated. If he skips a session, the pain comes back.

Veteran Shirley Gorum-Cambridge, who lives in the Washington, DC, suburbs, used to receive the ear acupuncture and says she found it "very relaxing."

She also learned how to meditate through WRIISC classes, and maintains a daily practice on her own. "The techniques were very nice. I learned how to settle down, to clear my mind."

The soft-spoken 61-year-old served at the Pentagon during the Vietnam era and today suffers from spinal stenosis. A bone in her neck is pressing against a nerve. A few years ago, a doctor recommended surgery. Her WRIISC team recommended physical therapy instead. She went that route and is happy she did. At physical therapy, she walked a lot—another habit she keeps up with on her own, doing up to four miles a day.

All in all, she says, "My tolerance for pain has gotten a lot better. I hurt, but I've learned how to deal with it."