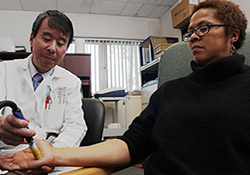 Melanie Yvette Jackson recalls the bluish-black smoke she saw rising from the oil well fires in Kuwait. She was stationed as a Navy corpsman in the neighboring country of Bahrain. It was toward the end of the Gulf War, in 1991.

"We were near the oil fires," says Jackson. "The sky was totally dark. You'd blow your nose and black stuff would come out. I'd wash my hair and the sink would be black. I was inhaling whatever was burning."

Jackson, 52, of Maryland, is among the roughly 175,000 Gulf War Veterans who reported health problems after their deployment. She, like the others, can still only guess at the exact cause. She received multiple vaccinations, was exposed to extreme temperature changes, endured the mental stress of war. But what triggered the sudden decline in her health following the war remains a riddle.

"I was 18 when I joined the Navy. I was healthy—no issues," she says. Now, her chief complaint is irritable bowel syndrome. She manages it mainly through diet, but she's had bad flare-ups of related conditions, such as Crohn's disease and ulcerative colitis, during which she was put in the hospital and lost nearly 30 pounds. She's struggled with other serious health issues as well, including neuropathy and thyroid cancer. She also attended a women's group at a Vet Center for several years to help cope with PTSD.

Today, Jackson and about 60 other Gulf War Veterans have enrolled in studies led by Dr. Mian Li, a neurologist, at the Washington, DC, WRIISC.

Li is following up with Gulf War Veterans who are part of a Gulf War Registry started in 1995. Jackson is among them. "I've identified the people who said they were sick—who have pain, fatigue, sleep trouble, difficulty exercising," says Li. "I am dealing with people who tell me, 'I used to be a strong, athletic soldier. Now I'm disabled.' They want to know why."

Veterans in the registry have been surveyed twice so far—in 1995 and 2005—by Drs. Han Kang and Clare Mahan and other epidemiologists with VA's Office of Public Health. The goal is to find clues to better understand the cause and nature of their illnesses.

Following up on epidemiology findings

Whereas the epidemiology findings are based on Veterans' self-reports, Li brings them into the clinic to administer a battery of nerve tests. So far, his work has confirmed higher rates of certain nerve problems in some ill Gulf War Veterans, compared with healthy Gulf War Veterans who have volunteered for the study as "controls." The findings center on the small nerve fibers that are part of the autonomic nervous system. They control the sensation of pain and enable signals to flow between the brain and organs such as the bladder, stomach, intestines, sweat glands, and peripheral blood vessels. Li says these small-diameter nerves may become therapeutic targets in future research.

On a recent visit by Jackson to Li's small third-floor WRIISC office, he touched an electrical probe to each of her fingertips to test the peripheral nerve sensation. In another test, he taped an electrode to her forearm to see how fast the nerves relayed signals. Another measure used by Li, called the tilt table test, checks heart rate and blood pressure as the person's body is tilted from a horizontal to a vertical position.

By keying in on the autonomic nervous system, Li hopes to pinpoint what has gone awry in those affected by chronic multisymptom illnesses—and what puts them at higher risk of "organic" diseases such as heart disease and arthritis. VA's long-term epidemiology data show higher rates of some chronic diseases among deployed Gulf War Veterans, compared with their non-deployed peers.

"My research is exploring whether there's an organic basis for the symptoms that can be treated," says Li. "Looking at the autonomic nervous system, we can detect small, subtle changes that don't show up in routine tests. If we find pathways in the disease process that are modifiable, we can find new treatments."

Jackson realizes the research may not solve all her health problems anytime soon, but that doesn't stop her from volunteering. "I don't mind participating in research," she says. "I'm sure it'll help me and some other people down the road."