The scent of war: VA studies a legacy of dust, smoke, and burn pits and what it means for Veterans 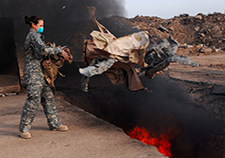 An airman tosses uniforms into a burn pit at Balad Air Base, Iraq, in 2008. The military burns unusable uniforms to make sure they don't end up in enemy hands. (Photo by Senior Airman Julianne Showalter, USAF)

An airman tosses uniforms into a burn pit at Balad Air Base, Iraq, in 2008. The military burns unusable uniforms to make sure they don't end up in enemy hands. (Photo by Senior Airman Julianne Showalter, USAF)

A persistent cough or shortness of breath can mean a lot of things—none of them very good, but for Veterans of Iraq and Afghanistan, they could be a byproduct of their service overseas and deserve additional scrutiny.

"Any changes Veterans notice post-deployment in their pulmonary functions, especially new symptoms, warrant a conversation with their provider and probably some testing," says Dr. Michael Falvo, a research physiologist at the VA's War-Related Illness and Injury Study Center in New Jersey.

Falvo's team recently reviewed and summarized the results of 19 unique studies of Iraq and Afghanistan Veterans to look for trends in their respiratory health. Their work appeared online in Epidemiologic Reviews on Jan. 14, 2015.

In short, the data appear to confirm higher rates of respiratory problems during and after deployment, but are inconclusive about the impact on long-term lung health. Falvo and colleagues say more long-term studies are needed.

Veterans encouraged to enroll in registry

More than 2.6 million service members have served in Iraq and Afghanistan. Almost half have deployed to the region more than once. For many of these Veterans and their families, post-deployment respiratory health has become a major concern.

The conversation, thus far, has focused mainly on burn pits, large open-air ditches where the U.S. military disposed of trash ranging from human waste to compact discs and plastics. At an average-sized U.S. base in Iraq, Falvo estimates burn pits would have consumed between 30 and 42 tons of solid waste per day. For larger bases, like Joint Base Balad in Iraq, which had a population of more than 25,000 in its prime, that number could jump to 100 tons of waste.

To that end, VA asked the Institute of Medicine (IOM) a non-governmental organization, to study the issue. IOM's 2011 report found that the evidence was "inconclusive" with regard to the long-term health effects of burn pits, and recommended further study. It also drew attention to other deployment risks, besides burn pits, that might harm respiratory health.

While IOM found no evidence tying burn pits to cancer, reproductive outcomes, or neurological, respiratory or circulatory diseases, all Veterans of Iraq and Afghanistan are encouraged to go to the website of VA's Airborne Hazards and Open Burn Pit Registry, where they can enroll, learn about potential health effects, and read the studies themselves.

Falvo agrees that burn pits are likely only part of a much larger puzzle.

"Air quality plays a gigantic role," he says. "The overall environment in Southwest Asia tends to be high in particulate matter, and we know a lot about exposure to particulate matter from decades' worth of research. Unfortunately the focus sometimes gets shifted solely to burn pits, which is why we've adopted the term 'airborne hazards' as a collective term to identify all the potential sources."

Take for example, sand and dust storms—something Veterans of Iraq and Afghanistan are all too familiar with. "One study in Kuwait found dust events occurred on average once every three days," says Falvo, "events that far exceeded exposure guidelines for airborne particulate matter."

As part of that same past report, air quality was tested at 15 locations in Southwest Asia, including six in Iraq and two in Afghanistan. Researchers from the Desert Research Institute in Reno, Nevada, collected more than 3,000 samples and found that particulate matter exceeded both occupational and military exposure guidelines at all 15 locations. To put that in perspective, the levels were about 10 times greater than those observed in urban areas in the U.S.

Scientists have also found heavy metals such as titanium, lead, and others, swirling around in the sand. How they got there is still somewhat of a mystery. They could be the result of natural crustal sources, industrial waste, burn pits, or even just as a result of decades of warfare.

Regardless of the source, some 70 percent of those serving in Iraq and Afghanistan during 2003 and 2004 later reported at least one acute respiratory illness during their deployment. Fifteen percent reported three or more instances, and 17 percent said they were forced to seek medical attention as a result.

Since then numerous studies have found higher risks of persistent cough or shortness of breath among Veterans of Iraq and Afghanistan. The Millennium Cohort Study, for example, analyzed data on more than 46,000 participants and found that deployed personnel—particularly those around ground combat, versus those based at sea—were more likely than non-deployers to have these problems. However, the rates of bronchitis, emphysema, and asthma were nearly identical.

And it's not just U.S. service members. One of the studies Falvo reviewed focused on the medical records of Polish soldiers serving in Iraq and Afghanistan. For those soldiers, acute respiratory illness was one of the most common health problems during their deployment.

Beyond the smoke and the sandstorms though, Falvo says service members may actually be predisposing themselves to respiratory illness, although that is not to say it is always avoidable.

"Being physically active increases the ventilation rate," he explains. "When we carry a load or exercise, we shift to breathing through the mouth and there's nothing to filter those particles," says Falvo, also an assistant professor at Rutgers Biomedical and Health Sciences.

Couple that with the often close quarters service members live and work in, and then include the presence of diesel exhaust from heavy equipment and vehicles, and you start to get the larger picture, says Falvo.

Smoking adds to the problem

While hard work and austere conditions may be part of the job description for soldiers, damage caused by smoking is completely avoidable. "One of the studies looked at acute pneumonia, and one of the major factors was a change in smoking patterns. We hear stories from Veterans all the time that go from not smoking before deployment, to picking up a pack-a-day habit," says Falvo.

The research supports Falvo. Some 40 percent of current military personnel smoke, compared to about 18 percent of the civilian population. What's more, tobacco use tends to double when a service member is deployed.

The result of all these catalysts is a hard-to-pin-down ailment that millions of Veterans could be at risk for. The good news though, according to Falvo, is that VA is getting a handle on what the population looks like and what illnesses they might be at risk for, so that providers will know how to best diagnose and treat them.

The Airborne Hazards and Open Burn Pit Registry, says Falvo, "is an important initiative that is giving us information into the symptoms and exposures of deployed Veterans. About 30,000 have signed up so far. That gives us an idea of how they're doing and feeling, and it also allows us to follow them over time, which is crucial to identifying patterns. I would encourage Veterans to enroll in the registry, regardless of whether they are currently experiencing any health problems. The data are important, and the more people who enroll, the better the data will be."