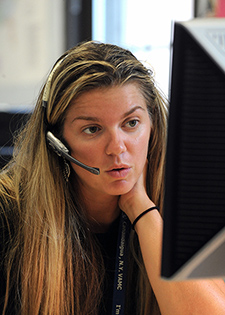 A counselor in action at VA's Center of Excellence for Suicide Prevention, which houses the Veterans Crisis Line and other services. A VA study found that ads placed in public transit in six cities were effective in increasing calls to the crisis line. (Photo by Robert Turtil)

A counselor in action at VA's Center of Excellence for Suicide Prevention, which houses the Veterans Crisis Line and other services. A VA study found that ads placed in public transit in six cities were effective in increasing calls to the crisis line. (Photo by Robert Turtil)

A public information campaign on suicide prevention succeeded in increasing the number of calls to a suicide prevention hotline, according to a VA study. The results, published in Public Health Reports in November 2014, show a statistically significant difference between the number of calls to the hotline in cities with the campaign and those without.

"These kinds of communication efforts are regularly employed for a range of health issues, from exercise and diet to contraception use and cancer screening," says Dr. Robert Bossarte, an epidemiologist with VA's Office of Public Health in Washington, D.C. He says the results of the study "really underscored the important role communication campaigns can play in promoting positive prevention messages."

VA launched the campaign in 2009 via a series of mass-transit-based suicide prevention messages in six cities. The goal was to increase awareness and promote the use of the Veterans Crisis Line and the National Suicide Prevention Lifeline.

The Veterans Crisis Line, or VCL, is a toll-free, confidential service providing specialized care to Veterans and active duty members, as well as resources for their families and friends. Callers access the VCL by calling the aforementioned National Suicide Prevention Lifeline (1-800-273-8255) and pressing "1" when prompted.

The ad campaign featured scenes relevant to Veterans, like soldiers and the American flag. The ads were on display for around 12 weeks from August through early November 2009 in Las Vegas, Dallas, Miami, Phoenix, San Francisco, and Los Angeles. In total, more than 6,500 advertisements were placed inside and outside local buses, in bus shelters, rail cars, and transit stations. For purposes of the study, the control cities, in which no such advertisements were run, were Denver, New Orleans, San Antonio, and San Diego.

"We were able to compare call volume made in both the test and control cities for 14 months before and after the campaign," explains Bossarte. The results reveal a small but statistically significant increase in calls to both the Veterans Crisis Line and the National Suicide Prevention Lifeline.

Calls to both the VCL and the NSPL increased in the implementation cities during the study. "Overall the volume increased," says Bossarte, "which is impressive given the low intensity of the campaign."

"It's promising," he adds. "The fact that we can use a passive form of media and have that kind of effect on calls to a suicide hotline suggests we can affect suicide prevention in Veterans. The next step is finding out which programs work best once we get these Veterans into care."