'Love hormone' may have role in schizophrenia therapy 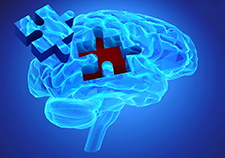 These are all good things in human relationships. Can doctors give a drug that increases these qualities?

If there is such an elixir for the social brain, it may just be a natural hormone called oxytocin (not to be confused with the pain drug OxyContin). Because of oxytocin's wide-reaching effects on human bonding and intimacy—both romantic and maternal—it's sometimes called the "love hormone."

Scientists are still learning more about how the hormone works on human emotions, and who might benefit from the substance, which is made naturally in the brain's hypothalamus. It's not yet available as an approved brain treatment in the U.S.

According to research at the VA Greater Los Angeles Healthcare System and the Semel Institute for Neuroscience and Human Behavior at the University of California, Los Angeles, one use for the hormone may be helping those with schizophrenia.

A study involving 27 Veterans and others with schizophrenia showed that oxytocin, delivered via nasal spray to the brain, boosted empathic accuracy—the ability to understand the emotions of others. The study was published in 2014 in the journal Neuropsychopharmacology.

Empathic accuracy is impaired in many people with schizophrenia, says psychiatry researcher Dr. Stephen Marder, with VA and UCLA.

"People with schizophrenia often have deficits in social cognition," he says. "That includes things like being able to recognize emotion in what others are saying, or in their facial expressions, or to recognize sarcasm. This has profound effects on their ability to adjust in the community. It affects their ability to work, to go to school, to develop social relationships."

Marder's group didn't administer oxytocin as a primary treatment. Rather, they used it as an add-on to a form of social cognitive training. The nasal spray improved outcomes of the training—particularly in an area in which the training by itself is not as effective.

The 12-session training program was developed a few years ago by Marder's colleagues Drs. Michael Green and Bill Horan. Basically, it teaches people with schizophrenia how to pick up on social cues and read the emotions of others. When those emotions are expressed in more abstract, non-visible ways, that's precisely where patients have trouble—and where the oxytocin made a difference.

"These programs tend to be effective in teaching cue detection—being able to recognize emotion in faces. Where the programs are not as effective is in teaching 'mentalizing'—putting yourself in others' shoes, empathizing.

"In our study we provided training in both cue detection and empathy. In the cue detection, we didn't find an effect from oxytocin, but we didn't need it. The patients learned it anyway. The training itself is effective in imparting that. Where we did find effects was on the measure we call 'empathic accuracy.' That's where the training by itself, without the oxytocin, didn't affect performance."

How does Marder's team measure empathic accuracy? They show video clips of volunteers telling stories about real personal experiences—either happy, such as a vacation, or sad, such as the loss of a loved one. The volunteers themselves rate the emotions on a scale. After watching the clips, the training participants rate the same experiences. Typically, even after the unenhanced social skills training, their responses are off the mark.

"This is an area where patients improved only if they received oxytocin," relates Marder. "Those who got no oxytocin showed no improvements in that area."

Marder's team is now exploring the effects further. For one thing, they're pursuing lab work to pinpoint the biochemical pathways that oxytocin affects. On another front, they want to see how far the hormone can go as an adjunct treatment—how much of an impact it can have on the everyday lives of those with schizophrenia. The results could also be relevant for those with autism, who also lack empathy. That itself is a hot area in oxytocin research.

"We want to do a larger study and understand how to better exploit this property," says Marder. "If we can improve empathic accuracy in a study setting, will that extend into the community? It's an important question."