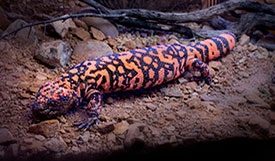 The venom of the Gila monster, pictured here in Saguaro National Park in Arizona, was the source for a diabetes drug discovered by VA researchers. (Photo: ©iStock/Jay Pierstorff)

VA researchers discovered a new diabetes drug from an unusual source. In the mid 1990s, Drs. John Eng and Jean-Pierre Raufman found that a hormone in the venom of the Gila monster—a large lizard native to the southwestern United States—stimulates the body’s insulin production. The hormone, exendin-4, works similar to another hormone called GLP-1 found in the digestive tract in humans that regulates blood glucose. But exendin-4 degrades in the body much slower than GLP-1.

Eng licensed the discovery to an outside pharmaceutical company so it could be developed into a drug. A synthetic version of exendin-4, called exenatide, was approved for medical use by the FDA in 2005. Exenatide, sold commercially as Byetta or Bydureon, is taken as a shot by people with Type 2 diabetes. It is used as an add-on to other diabetes drugs to avoid or postpone the use of insulin injections when diabetes is not well-controlled by the primary medicine. More than 2 million people now use exenatide worldwide.

Dr. John Eng’s research found that the saliva of the Gila monster contains a hormone that treats diabetes beter than any other medicine. Diabetes in Control. Sept. 18, 2007.