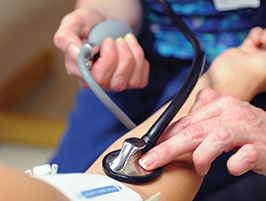 In 1964, Dr. Edward Freis, of the Washington DC VA Medical Center, and his colleagues set up the VA Cooperative Study Group on Antihypertensive Agents. This was the first well-designed, placebo-controlled clinical trial to show that drug treatment can reduce the death rate in patients with moderate high blood pressure.

The results of the five-year study indicated that drug treatment for moderate high blood pressure (diastolic pressure between 105 and 114) reduced the death rate among patients by more than 50 percent. Drug treatment was 67 percent effective in preventing major complications that arise from cases of moderately high blood pressure, including strokes, congestive heart failure, and kidney failure. A 1967 paper by the team indicated similar beneficial effects or patients with diastolic blood pressures averaging 115 to 129.

Later work by the group found that treatment of the elderly reduced adverse events and led to a revolution in the care of people with hypertension. Prior to this research, high blood pressure was considered a normal part of aging, and it was not yet known that treating high blood pressure could prevent death.

Freis, who dies in 2005, was awarded the Albert Lasker Clinical Medical Research Award in 1971 for his revolutionary work on blood pressure treatment. Before joining VA, he served in the U.S. Army Air Corps during World War II.