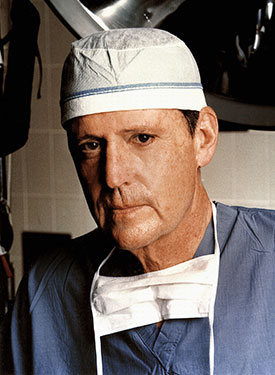 Dr. Thomas E. Starzl, who passed away in 2017 at age 90, was a VA transplant surgeon and research scientist for more than 50 years. He began his VA career in the 1950s as a resident surgeon in the Chicago VA Medical Center, and went on to serve at the Denver and later the Pittsburgh VA medical centers.

In 1962, while on the staff of the Denver VA Medical Center and the faculty of the University of Colorado Medical Center, Starzl conducted the first in a series of kidney transplants that consistently resulted in long-term survival for patients. He used the immunosuppressant drug azathioprine and the steroid prednisone to keep the body from rejecting the new kidney. While he was not the first surgeon to perform a successful kidney transplant, Starzl is credited with the "first-ever series of repetitively successful human kidney transplantations."

Widely regarded as the "father of transplantation," Starzl is also credited with performing the first successful liver transplant, May 5, 1963. No patient had survived the operation previously. While Starzl's patient did succumb to pneumonia weeks after the transplant, it was still considered a groundbreaking success and paved the way for life-saving procedures for many others in the years to come.

Starzl spent much of his research career working on anti-rejection medications that would markedly increase transplant survival rates. In 2011, he received the Lasker-DeBakey Clinical Medical Research Award, one of the most respected science prizes in the world, for his career accomplishments. As of 2018, he was one of seven VA researchers to have earned the honor.