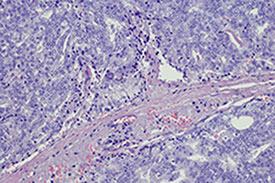 In the 1960s, VA researcher Donald Gleason and his colleagues at the Minneapolis VA Hospital developed a grading system to classify the stage and prognosis of prostate cancer. Today, the Gleason score is almost universally used to rate prostate cancer. It is considered the most reliable measure of prostate cancer's chances of growing and spreading.

Total scores range from 2 to 10, with a higher score meaning more advanced cancer and a worse prognosis. Cancers with scores of 2-4 are usually considered benign or slow-growing. Scores of 5-7 are the most common, and are highly treatable. Scores of 8-10 show an advanced stage of cancer ad are unlikely to be cured.

Gleason served in the U.S. Army Medical Corps before going to work at the Minneapolis VA Hospital. He became the head pathologist in 1986. He died in 2008.