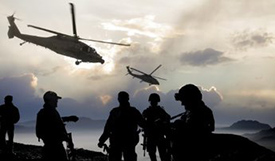 On Aug. 2, 2021, VA announced it would begin processing disability claims for asthma, rhinitis, and sinusitis based on presumed particulate matter exposures during military service in Southwest Asia and certain other areas if these conditions manifested within 10 years of a qualifying period of military service. Much of the data for this significant decision came from the Millennium Cohort Study (MCS), a partnership between the VA Office of Research and Development’s Cooperative Studies Program and the Department of Defense.

Particulate matter is a complex mixture of extremely small particles and liquid droplets. It is made of a number of components, including acids, organic chemicals, metals, and soil and dust particles. Veterans may have been exposed to these toxic substances through the smoke and fumes from open burn pits; sand and dust; general air pollution; fuel, aircraft exhaust, and other mechanical fumes; and smoke from oil well fires.

VA Secretary Denis McDonough concluded, based on VA’s evaluation of a National Academies of Science, Engineering and Medicine report and other evidence, that particulate matter pollution is associated with the three conditions mentioned above in Veterans who served in Southwest Asia since Aug. 2, 1990, or in Afghanistan, Uzbekistan, Syria, or Djibouti since Sept. 19, 2001. He also concluded there was sufficient evidence to presume all Veterans serving in these locations had been exposed to particulate matter. As justification, the regulation codifying the Secretary’s decision cites a number of studies by MCS researchers on the respiratory health of these Veterans.

The goal of the MCS, which began in 2001, is to determine how military-related experiences affect the long-term health of service members and Veterans. It was created in response to growing public concern about the potential health effects of deployments following the Vietnam and Gulf War conflicts, and has been expanded to address health outcomes related to military conflicts following Sept. 11, 2001.

Today, more than 250,000 servicemembers and Veterans participate in the study, which is the largest and longest-running health study in military history and spans multiple generations of warfighters. Most participants are men, but 30% are women. More than half (54%) deployed at least once during their military service. Participants predominantly served in the Army (45%), followed by the Air Force (29%), Navy (16%), Marine Corps (9%), and Coast Guard (2%).

The MCS team expects to further advance research in the area of military exposures and to continue impacting VA and DOD policy for many years to come.