Radioimmunassay: Invaluable technique for measuring substances in the blood 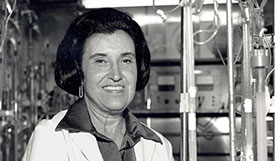 Dr. Rosalyn Yalow, along with Bronx VA colleague Dr. Solomon Berson, developed the technique of radioimmunoassay, used widely in medicine to measure substances in the blood.

This measuring method was developed by two VA researchers, Dr. Rosalyn Yalow (who received the Nobel Prize in Physiology and Medicine for her work in 1977) and Dr. Solomon Berson, who died in 1972 and was not eligible for the Nobel, which is not awarded posthumously.

In their laboratories at the Bronx VA hospital (now the James J. Peters VA Medical Center), in 1956, Yalow and Berson published a paper on how the body uses insulin, and proved that Type 2 diabetes is caused by the inefficient use of insulin, instead of the lack of insulin. This paper also describes the basis for the concept of radioimmunoassay. They published their definitive report on the radioimmunoassay technique in 1960.