Restoring the ability to cough for those with spinal cord injury 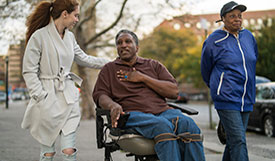 Since the 1990s, a group of researchers at the Louis Stokes Cleveland VA Medical Center has studied how to restore respiratory function by stimulating the respiratory muscles in people with spinal cord injuries (SCIs). When the preliminary work with dogs showed that the approach was reasonable to try in people, many Veterans with SCIs were among the volunteers who participated in the clinical trials. Stimulators acting on the nerves that control the respiratory muscles, or directly on the diaphragm, have now replaced bulky mechanical ventilators and make more natural breathing possible for many patients with SCI.

The same researchers then continued their research with dogs to develop a way to stimulate the muscles in the pattern that produces an effective cough. Many people with SCI are at risk for potentially lethal respiratory infections and pneumonia because they cannot cough to clear their lungs and airways. The resulting cough stimulator was also tested with Veterans who volunteered for the clinical trials, and is now in use clinically, reducing the incidence of respiratory infections, improving quality of life, and dramatically reducing the costs of care for these people.

VA researchers continue to work on improving the cough stimulator technology. Advances could expand its use in Veterans with SCI, as well as in others who have difficulty coughing—for example, because of strokes or ALS.