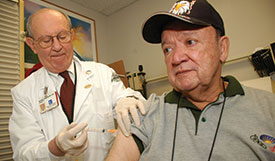 VA led the clinical trial that resulted in Food and Drug Administration approval for a shingles vaccine. FDA's initial approval for the use of the vaccine in people over 60 years old was given in 2006. In 2011, the vaccine was approved for individuals 50 years old and over. The Centers for Disease Control and Prevention has recommended that adults 50 years and older get vaccinated.

Shingles is a viral disease involving a painful skin rash and blisters. It is caused by the same virus that causes chickenpox. Shingle is most common in older people. Some people with shingles can develop ongoing nerve pain, called postherpetic neuralgia.

The original VA trial involved nearly 39,000 Veterans and other Americans at 16 VA medical centers, the National Institutes of Health, and five universities. Merck supplied the drugs and placebos for the trial, and some supplemental funding. In the trial, the vaccine reduced the incidence of shingles by 51 percent, compared with controls.