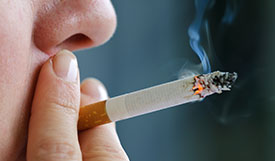 Pioneering work at the East Orange VA Medical Center in the 1960s established the causal link between active smoking and lung cancer. Earlier observations linked lung disorders and cigarette smoke, but were criticized by the tobacco industry as failing to demonstrate that the cigarette smoke induced the lung cancer. A landmark animal research study by Dr. Oscar Auerbach found that smoking for three years caused major changes in the lungs of animals who were taught to inhale cigarettes—and that many developed cancer. The VA research with dogs was the basis for the warning labels on cigarette packages.

The VA work was cited heavily in the 1964 Surgeon General’s report on the dangers of smoking. By studying thousands of slides of human tissue, Auerbach and colleagues showed that the more a person smoked, the more tissue damage was seen in the lungs. They also showed the danger of second-hand smoke.

Smoking and health: Report of the Advisory Committee to the Surgeon General of the Public Health Service. U.S. Department of Health, Education, and Welfare. 1964.